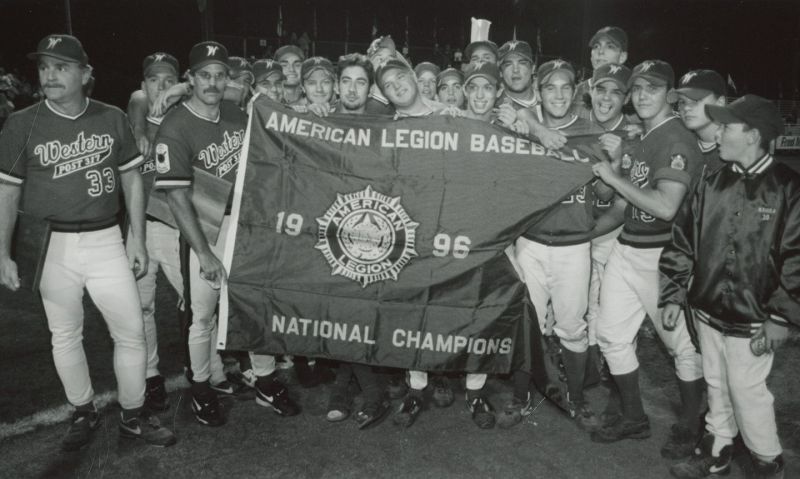 Not only was Yardley the first American Legion World Series champion that hadn’t first won a state title but Post 317 also became the first Region 1 winner to claim an ALWS title.

And Yardley did so by rallying in a title game against eventual major league pitcher Ben Sheets.

“Words can’t even describe the feeling of what we went through that year and how close the kids got,” Yardley manager Meade Tenaglia told the Bucks County Courier Times in 2011. “Obviously, you need talent to get to a certain level, but it’s chemistry and heart that can really take you far. The longer you stay together, the stronger the bond becomes and the more the kids start playing together instead of playing as individuals.”

How much chemistry did this team have?

Of the team’s 18-man roster, only one played professionally — that for one season — and Tenaglia meshed the roster out of players from four high schools.

Even with their historic success, Yardley endured hardship during every step of the playoffs.

That began with just getting out of their own county.

Yardley had to beat Bristol in back-to-back games in a best-of-three Lower Bucks League final to advance into the Pennsylvania playoffs.

In the state tournament, host Boyertown, which has a Pennsylvania-record 23 state titles, beat Yardley twice on the tournament’s final day to claim its 15th state championship in 21 years.

Fortunately for Yardley, Pennsylvania sent its 1996 runner-up to the Northeast Region 1 tournament in Bristol, Conn.

The second life helped Post 317 rebound from the disappointing state tournament loss to Boyertown and Yardley advanced to the finals against Swampscott, Mass.

Facing a 4-1 deficit in the eighth inning, it looked like Yardley would end up one win shy of the American Legion World Series. But Post 317 rallied to force extra innings, then won 6-5 on regional MVP Brian Moyer’s two-out RBI walkoff single in the 10th inning.

The reward for winning? A trip to Roseburg, Ore., some 2,945 miles away from Yardley.

Facing a Gonzales, La., team that featured two eventual American Legion Baseball award-winners, Yardley rallied from a 9-4 deficit to tie the score in the seventh inning and won 10-9 after Joe Ferraro’s home run in the top of the ninth inning and Ed Soley’s scoreless relief pitching in the bottom of the ninth.

Yardley kept it going the next two days with victories over Vancouver, Wash., 12-6, and Rowan County, N.C., 8-7 — the latter as 15-year-old reliever Kennan Tenaglia (the head coach’s son) got the final out on a bases-loaded flyout.

Knowing his team was guaranteed a spot in the championship, Meade Tenaglia rested his starters in a 13-1, 7-inning loss to Midland, Mich., then watched Gonzales finish their advance through the loser’s bracket to the finals with an 11-3 win over Midland while saving Sheets to start the title game.

Sheets, who won the Bob Feller Strikeout Award with 37 in regional and American Legion World Series competition, was a month away from enrolling at Northeast Louisiana (now Louisiana-Monroe). There, Sheets became a two-time All-American who would pitch the United States past Cuba in the gold medal game in the 2000 Sydney Olympics and become a four-time major league All-Star during his 10-year career with the Milwaukee Brewers, Oakland Athletics and Atlanta Braves.

Sheets didn’t disappoint until Yardley made yet another rally — this time for three runs on hits by Moyers, Nelson Redante and Vic Hillaert — to take a 6-3 victory. The win wasn’t secured until Soley retired Bourgeios on a groundout with two runners on in the ninth.

The win came in front of 4,089 fans that helped make the overall attendance of 38,836 the most in American Legion World Series competition since the eight-team concept began in 1960.

“The whole tournament everyone was hyping him (Sheets) up, ‘Oh, he’s gonna be so good,’” shortstop Keith Balent told the Bucks County Courier Times in 2011. “I think he turned out pretty good, with a gold medal and everything. But on that day, we got the better of him.”

Hillaert was the only Post 317 player to have a professional career; A fifth-round pick of the Texas Rangers out of Shippensburg University in Pennsylvania, the 6-foot-2, 220-pounder played one year for Savannah, Ga., of the Class A South Atlantic League.

Meade Tenaglia in 2012 was inducted into the Pennsylvania American Legion Baseball Hall of Fame in Boyertown after 24 years coaching Yardley to 17 Lower Bucks League championships, one state championship, one state runner-up finish and the historic 1996 World Series victory.

“All those (American Legion Baseball) teams in the United States all going for one goal and we were the ones who got there,” Krusen told the Bucks County Courier Times in 2011. “We just had so much heart and soul. There wasn’t one player on that team who didn’t believe in each other.”