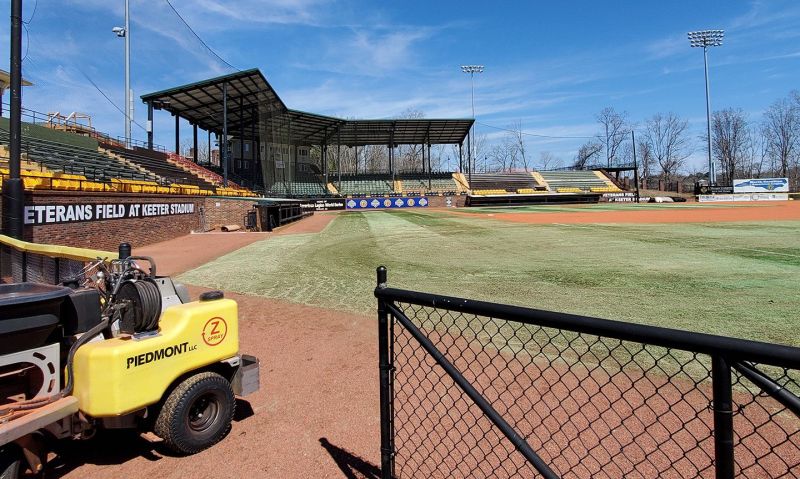 The grandstand canopies at Veterans Field at Keeter Stadium in Shelby, N.C., are being extended along both base lines. Stadium improvements are scheduled to be complete before the 95th American Legion World Series, Aug. 11-16, 2022. Photo by Andy Proffet

Fans attending the 95th American Legion World Series this August will have cooler seating options during the day and better views at night thanks to upgrades at Veterans Field at Keeter Stadium.

Canopies over the grandstand seats are being extended down both baselines to provide more shade at the annual ALWS in Shelby, N.C. And stadium lights at Keeter Stadium are being replaced by LED lights.

The extended canopies will include large ceiling fans like the existing canopies.

The LED lights will help brighten the field for players, fans in the stands and those watching at home on ESPNU and ESPN3.

American Legion World Series Chairman Eddie Holbrook said the lights are similar to those used in pro stadiums such as Bank of America Stadium, home of the NFL’s Carolina Panthers, and Truist Field, home of the Triple-A Charlotte Knights.

The $2.2 million project is being funded through a grant from the state’s Department of Commerce. Holbrook credited North Carolina Speaker of the House Tim Moore, a lifelong resident of nearby Kings Mountain, for helping get the project funded.

Holbrook added that the project is a testament to the ALWS’ economic impact not only to Shelby and Cleveland County, but to the region and state. In 2018, when the ALWS was recognized by Sports Destination Management as a Champion of Economic Impact in Sports Tourism, the series had an economic impact over $8.5 million locally and $16 million regionally.

This year’s stadium upgrades follow improvements made over the last two years, which include laser-grading of the field, new Bermuda sod for the field and bullpen, an improved irrigation and underground drainage system, a new outfield fence, and more.

The 95th American Legion World Series is scheduled for Aug. 11-16.