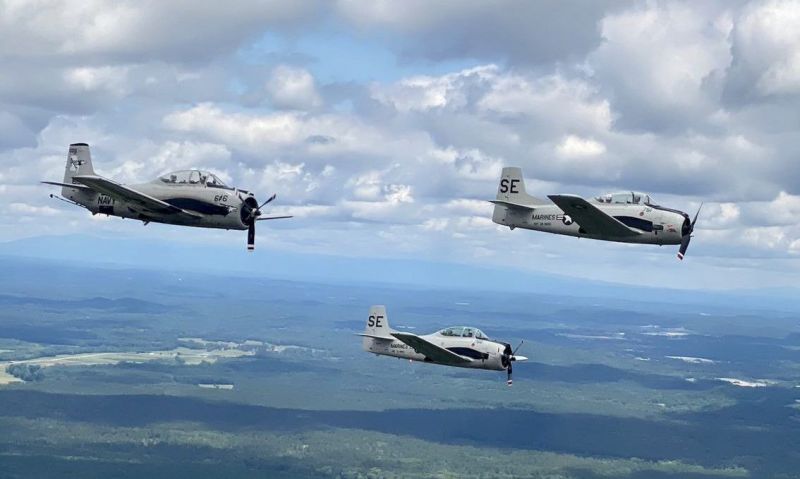 Pilots in three T-28 Trojan warbirds are scheduled to execute flyovers during the first three days of the 2022 American Legion World Series in August.

Warbirds are vintage military aircraft now operated by civilian organizations or individuals. The T-28s headed for Shelby, N.C., are retired military trainers now owned by The Museum of Flight in Rome, Ga.

The first flyover is planned as part of the Parade of Champions on Aug. 11, opening day of the tournament. All eight of the regional teams vying for the national title will line up on Veterans Field between the third and fourth games of the day. The pilots will execute another flyover of the stadium during the Aug. 12 evening games. The T-28s will be on display to the public at the Shelby-Cleveland County Regional Airport from 10 a.m. to noon Aug. 13; the pilots will execute a final flyover at the stadium that afternoon as part of USAA Military Appreciation Day.

“It will be loud and lively,” says Robert Farrow, the ALWS volunteer who coordinated the Warbirds’ appearance. Farrow, a U.S. Navy veteran and a retired air traffic controller, has produced and served as air boss for several air shows.

“These aircraft travel across the county raising awareness of aviation and the important role it has played in shaping our nation’s history,” Farrow says. “It’s a great way for us to remember and honor the sacrifice of veterans who have served in the past, as well as those currently serving on active duty.”

The Museum of Flight, established in 2010, has displays and a collection of flight and military memorabilia in addition to the warbirds, which are flown in air shows around the southeastern United States.

Two of the T-28s served in Operation Farm Gate in Vietnam, while the third is attributed as the first T-28 to land on an aircraft carrier, the USS Tarawa.

Museum of Flight Director Christine Lewis told the ALWS committee: “Thank you for the opportunity to execute our mission, to increase the awareness of aviation through the flight of historic aircraft while supporting the local children’s hospital (in Georgia). I’ve heard it said, ‘Anyone who does anything to help a child is a hero.’ What the ALWS does is just that.”

Farrow also coordinated another military group to awe the fans before the championship game on Aug. 16. The U.S. Army Parachute Team, the Golden Knights, will perform before the 7 p.m. game.

The Golden Knights are headquartered at Fort Bragg, N.C.

“The Golden Knights are the premiere skydiving team in the world – the best of the best,” said Andrew Hopper, an Army veteran, Shelby City Councilman, and member of the ALWS committee. “As a former paratrooper, I am excited for the City of Shelby to have them perform here. I’m sure everyone, especially the American Legion officials here, will enjoy this. It’s going to be a fantastic day!”