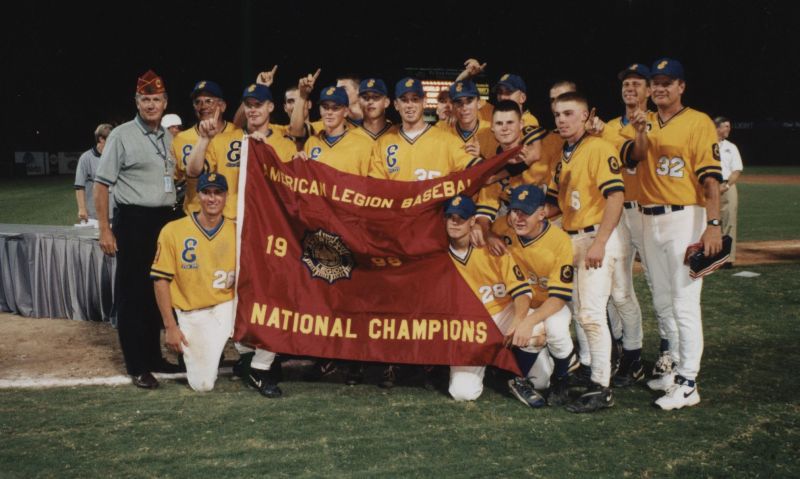 The 1998 American Legion World Series was unique for several reasons.

Not only was the event using a pool play format for the first time, the championship was also played in the glare of Las Vegas for the first and only time.

In the end, a resilient Edwardsville team won Illinois’ first ALWS title since 1933 while handing Cherryville, N.C., a heartbreaking defeat in what would be the first of its two ALWS runner-up finishes in six seasons; Cherryville also finished second to Rochester, Minn., in 2003.

Edwardsville’s determination to win was borne of the resolve it showed just to get to Las Vegas and was best exhibited by what 1998 George Rulon Player of the Year Chad Opel told The Las Vegas Sun after his team rallied from an early deficit to defeat Cherryville 9-4 in a game that was shown on tape delay by ESPN.

“All of us got cut up on this field,” Opel said after the win. “But none of us got taped up before the game. We said, ‘Let’s leave our blood on the field. Let’s leave it all out there.’”

Opel did so throughout national tournament competition after leading Edwardsville to a 4-0 record in the state tournament to win its first-ever Illinois state title in 1998.

In the regionals, which also used pool play, Edwardsville immediately faced adversity as it lost 7-6 to Anderson, Ind., in the opener of the Great Lakes Regional at Lancaster, Ohio.

Instead of panicking, Edwardsville relied on its championship experience to thrive.

After all, Post 199 helped the town become only the second in Illinois history to win a state high school title and an American Legion Baseball title in the same year, and first since 1986.

His twin brother, James, led Edwardsville to a regional title in which Post 199’s offense erupted for a .454 team batting average with 11 home runs in five games; After the opening-game defeat, Edwardsville outscored its next four opponents 70-22, capped by a 15-2 win over Anderson in the title game.

In the ALWS, Edwardsville dropped its second game to Danville, Calif., before its offense carried Post 199 again to win the championship game.

Post 199, which had defeated Excelsior, Minn., 13-2 in its ALWS opener, edged host Las Vegas 7-5 to advance to the single elimination semifinals and knocked off State College, Pa., 9-3 to move into the title game.

In the championship game, Edwardsville trailed 2-0 after four innings and 2-1 after five before scoring eight times in the final four innings to claim its title.

“You could see the effort in their faces and their effort on the field,” Edwardsville manager Ken Schaake told The Las Vegas Sun after the game. “They weren’t going to quit.

“These kids always feel they can hit the ball. They have a great amount of confidence in themselves. They know if one guy won’t do it, the next one will.”

Opel, who hit .632 in national competition to take the Louisville Slugger Award, had an RBI single in Edwardsville’s three-run seventh that gave Post 199 a 6-2 advantage.

At tournament’s end, Opel was joined by Edwardsville’s coaching staff — head coach Ken Schaake and assistants Steve Haug, Keith Opel and Mike Schaake — and teammates Dave Crouthers, Ben Hutton and James Hutton in taking top post-tournament honors. Chad Opel was all-tournament in addition to the Rulon and Louisville Slugger honors, the coaching staff was given the Jack Williams Memorial Leadership Award and Crouthers and the Huttons were all-tournament selections.

Combined with Edwardsville High’s 40-0 record as it won the Class AA Illinois state high school title, the team finished 81-7 overall on the season.

For Cherryville, the disappointment was tempered by the fact that Post 100 was making its first ALWS appearance since 1953.

Instead, Post 100’s title game loss made it the fourth North Carolina runner-up; Cherryville (2003) and Rowan County (2016) have since given the state two more ALWS runner-up finishes.

Roberts eventually would play collegiately for Lenoir Community College and at the University of North Carolina before spending six seasons in the Atlanta Braves organization and four seasons of Independent League baseball capped by helping Amarillo, Tex., to three straight United League titles from 2008 to 2010.

A right-handed pitcher who also played outfield, Roberts hit .406 with 51 home runs and 135 RBIs and a 28-6 pitching record in his three seasons of American Legion Baseball.