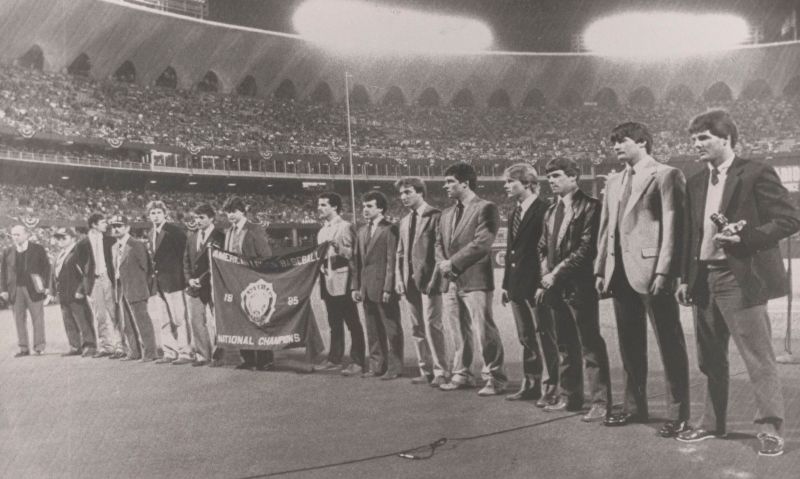 The American Legion Baseball team from Midlothian, Virginia Post No. 186 won the 1985 World Series in Kokomo, Indiana on September 2, 1985.

It took a pair of storybook finishes, but Midlothian, Va., took a win for the ages when it claimed Virginia’s first and only American Legion World Series title in 1985.

A state that began sending teams to national competition in 1928, Virginia had previously sent teams to ALWS championship games in 1959 (Hampton) and 1981 (Richmond) but came up short each time.

Virginia also had six other teams advance to the ALWS without taking a title, and has sent six more teams since 1985 that have endured the same fate. That includes Midlothian’s second visit to the ALWS in 2006.

But in 1985, a first-year coach directed Post 186’s “Mules” to the championship as American Legion Baseball celebrated its 60th anniversary.

Located a few miles west of the state capital of Richmond, Midlothian’s championship story began a year earlier when it won the first of its three state titles in 1984.

That summer, the Mules finished as runner-up to longtime power Brooklawn, N.J., in the 1984 Mid-Atlantic Regional hosted by Newport News, Va.

The following year, Midlothian started its series of dramatic victories in the Virginia state tournament.

Trailing by two in the ninth inning against Falls Church in the second round, Midlothian scored twice to tie, then won 6-5 in the 10th inning on a balk. The Mules would finish an unbeaten tournament run with a 9-2 victory over Newport News, Va., in the state finals.

That win earned Post 186 the daunting task of playing the 1985 Mid-Atlantic Regional on the homefield of perennial power Boyertown, Pa.

Boyertown held a 3-0 lead with two outs in the bottom of the ninth inning before the Mules rallied for an improbable four-run rally to send them to the ALWS in Kokomo, Ind.

With the bases loaded, Midlothian’s Tony Moore hit a one-hopper that could’ve been a force play at second for the final out. Instead, a throwing error turned into a three-base error, and when another throw went out of play, Moore came home with winning run.

In May 2011, when the team received a special citation at the Virginia Sports Hall of Fame banquet in Portsmouth, Mark Chambers told The Richmond Times-Dispatch that he had a copy of an audiotape of the Boyertown radio station’s broadcast. He chuckled when recalling how quickly the home crowd went from boisterous cheering to total silence.

“They couldn’t believe what happened,” Chambers told the newspaper. “What’s the saying: it’s better to be lucky than good? We were definitely lucky.”

“Our team wasn’t a bunch of individuals,” said Chambers, who batted .409 and drove in 38 runs. “We all knew each other and had played together since we were kids. We played our roles and we were a team.”

“We were there for the kids and there was no ego involved,” Moody said. “I’ve always had a lot of respect for David and that makes it easy because you know things are being done the right way.”

Added George: “As far as executing basic plays, we did that very well.”

In the ALWS, Midlothian set a then-ALWS single-game record with six home runs in the victory over the Guaynabo, P.R., team that included future major league All-Star Carlos Baerga.

“That whole summer was just amazing,” said Chambers, whose team finished with a 40-5 overall record and went 9-2 in national tournament competition. “It’s something I’ll never forget.”