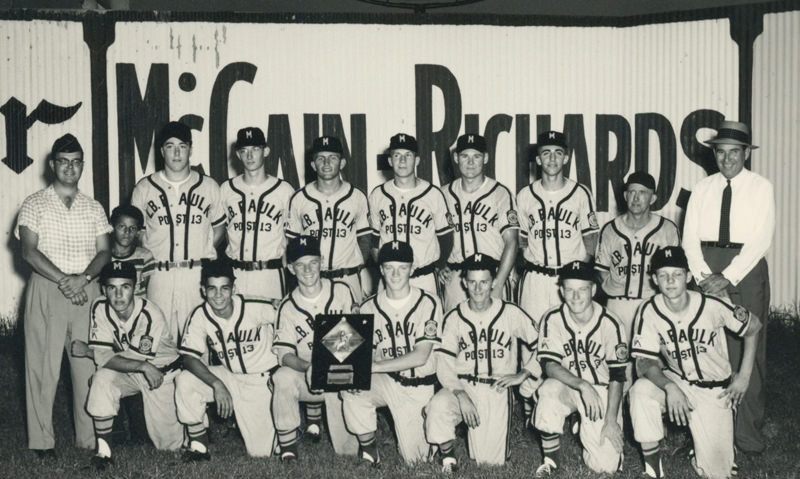 American Legion Baseball is a national institution, having thrived through a world war, several national tragedies, and times of great prosperity as well as great despair.

The league still stands behind the traditional values upon which it was founded in 1925. American Legion Baseball has taught hundreds of thousands of young Americans the importance of sportsmanship, good health and active citizenship. The program is also a promoter of equality, making teammates out of young athletes regardless of their income levels or social standings. American Legion Baseball has been, and continues to be, a stepping stone to manhood for millions of young men who have gone on to serve their country or community, raise families or play the sport at the highest level.

Community service has always been a core value of The American Legion. In 1925, this commitment was furthered to include a baseball program.

The league was first proposed at an American Legion state convention in Milbank, S.D., when Sioux Falls attorney and Department Commander Frank G. McCormick invited his close friend, Maj. John L. Griffith, to address the convention. Instead of a traditional speech, Griffith, who was also the collegiate commissioner of the Western Conference (now the Big Ten), spoke about the role athletics can play in the development of youth.

"The American Legion could well consider the advisability of assisting in the training of young Americans through our athletic games," Griffith said. Athletic competition teaches courage and respect for others, fostering their growth into active citizens, he explained.

The South Dakota convention agreed and passed a resolution urging the Legion to create an organized summer baseball league that started each June. National Commander James A. Drain backed the resolution, which passed that fall at the Legion's national convention in Omaha, Neb. It read:

"RESOLVED: That The American Legion ... inaugurate and conduct baseball leagues and tournaments for local championships, and that local champions determined by the competitions be given opportunity to compete in departmental, sectional and regional tournaments, and that a junior world series championship baseball series be conducted at each national convention ... "

The first program in the world to provide a national baseball tournament for teenagers, American Legion Baseball was born.

In 1926, posts in 15 states began to make Griffith's vision a reality. They organized and sponsored teams, drafted local schedules and conducted championship tourneys. Postseason tournaments at the state, sectional and regional levels culminated with a national championship. Only a few changes have been made to the format over the years. The tournament still has a similar setup: 64 teams play at eight regional sites, with eight teams going on to the World Series. The winning team receives a trip to Major League Baseball's World Series, a tradition dating back to 1926.

A little help from their friends

The first American Legion Baseball World Series was held in Philadelphia in 1926. Yonkers, N.Y, Post 321 beat a team from Pocatello, Idaho, capping off what appeared to be a successful first season.

The league, however, hit a few growing pains in its second year. In 1927, the Legion's national convention convened in Paris. With the organization's financial coffers stretched thin from the trip's expenses, the Legion couldn't fund a World Series. No champion was named and the future of American Legion Baseball looked bleak, as the inaugural season wound up costing more than originally planned.

But the Legion's Americanism director, Dan Sowers, worked to keep the league afloat. The tournament format needed $50,000, and Sowers was determined to raise it. Early in 1928, he went to an executive meeting for professional baseball, hoping to reach a sympathetic ear. He found one in Commissioner Kenesaw Mountain Landis, who pledged a $50,000 annual donation from Major League Baseball. Legion Baseball resumed in 1928, and by 1929 participants were coming from every state and the District of Columbia.

Still, the program wasn't in the clear. Like other institutions, Legion Baseball fell on tough times during the Great Depression. In 1933, MLB's funds were sapped dry, and Legion Baseball was left without a sponsor. The annual $50,000 donation was pulled, and it looked likely the national tournament would be abandoned indefinitely.

Again, Sowers set out to find a generous sponsor. Initially, he hounded big corporations, but he was concerned they'd treat to his fledgling baseball league as a public-relations arm. He turned to Frank Knox, a newspaper publisher and former department commander. Knox, who originally cautioned Sowers against using corporate sponsorship, contributed $5,000 and gave Sowers letters of introduction to several other newspaper publishers. An additional $28,500 was raised in donations from the Chicago Daily News, the Omaha World-Tribune, the San Francisco Chronicle, the Indianapolis News, the New Orleans Item-Tribune and the Atlanta Journal. Sowers received the final $6,500 from his own boss, Col. Henry L. Doherty, president of Cities Services.

Legion Baseball soldiered on, even though some posts were still forced to run teams on shoestring budgets. MLB resumed its funding in 1935, starting with a $20,000 donation and continues today supporting the program with an annual grant.

American Legion Baseball enjoys a reputation as one of the most successful and tradition-rich amateur athletic leagues. Today, the program registers teams in all 50 states plus Canada. Each year young people, ages 13 to 19, participate. Since its inception in 1925, the league has had millions of players, including countless who have gone on to play in college and professional baseball, with 82 inducted into the Baseball Hall of Fame.

Legion Baseball also has a reputation for serving the young people who play for it. In college scholarships, the league annually awards a total of $25,000 - $500 for a player selected from each department based upon leadership, character, scholarship and financial need. Recently, the Legion passed a resolution allowing corporate sponsorship, in the hope of creating more financial aid for college. Diamond Sports currently funds $25,000 in scholarships for the American Legion Baseball All-Academic Team. Eight players receive a $2,500 scholarship and the "Captain" of the All Academic Team receives a $5,000 scholarship.

In 1949, the national player of the year was first named through the arrangement of Robert Quinn, director of The National Baseball Hall of Fame and Museum. Fittingly, winners receive a trip to the Hall of Fame in Cooperstown, N.Y., making them the only amateur athletes invited to the exhibit. The award is now named after George W. Rulon, who served as program coordinator from 1961 to 1987.

Three other recognition awards were established in the 1970s: the Dr. Irvin L. "Click" Cowger RBI Award, the Rawlings Big Stick Award and the Bob Feller pitching awards. All recognize strong performances in the regional and national tournaments.

Over the years, plenty of other major corporations have joined Gatorade in sponsoring Legion Baseball. In the 1940s, Ford Motor Co. dealers supplied uniforms for local teams. Diamond Sports signed on as the "Official Baseball of the American Legion World Series."

Major League Baseball and American Legion Baseball don't have a formal partnership, but the two owe each other a tremendous debt of gratitude. MLB has sponsored Legion Baseball almost since its inception, and Legion Baseball has returned the favor, churning out major league prospects since the alumni base has been old enough to be scouted. The number of former Legion players who have   gone on to the pros is far too large to chart. More than half of current major-leaguers played Legion Baseball. So did almost every working MLB manager, along with several former commissioners. In all, 82 program graduates are in the Baseball Hall of Fame.

Naturally, Legion Baseball's alumni base includes some of the sport's most recognizable names. Yogi Berra played for Fred W. Stockham Post 245 in St. Louis and was once quoted as saying it was the most fun he ever had. Ted Williams suited up for a post in San Diego. Frank Robinson led his Oakland, Calif., team to the only back-to-back national championships in program history. Babe Ruth was too old to join when Legion Baseball started, but he spent the final years of his life promoting the program as its director of operations. Other prominent players include Justin Verlander, Ryne Sandberg, Roy Campanella, Dusty Baker, Albert Pujols, Greg Maddux and Chipper Jones.

Of all the notable former players, Legion Baseball had perhaps the greatest impact on former Cleveland Indians great Bob Feller. A self-described shy farm kid from rural Iowa, Feller cut his teeth playing for Variety Post 313. He says the experience taught him as much about life as it did baseball. Legion Baseball gave him an outlet to be discovered as a pitcher, but also gave him a chance to form lifelong friendships, learn to deal with letdown in athletic competition, and become better prepared for the mental and emotional strain of fighting in a war.

The first Legion alumnus elected to the Baseball Hall of Fame, Feller wrote a column for The American Legion Magazine in June 1963, expressing his love and appreciation for the league after it honored him with a plaque in 1962.

"Truthfully, I feel I should have given a plaque to The American Legion rather than receiving one from it," Feller wrote. He penned the column free of charge and admitted that he never endorsed anything he didn't believe in during his career, even for large sums of money.

Yet baseball isn't the only area where former players have excelled. Legion Baseball graduates have gone on to prominence in other career fields. Former Vice President Dick Cheney played for Post 2 in Casper, Wyo. Famed journalist and author Tom Brokaw played Legion ball in South Dakota, and Secretary of Agriculture Tom Vilsack was on a team in Pennsylvania.

In short, Legion Baseball graduates are proud contributors throughout our society and often are the most successful people in their respective career fields.