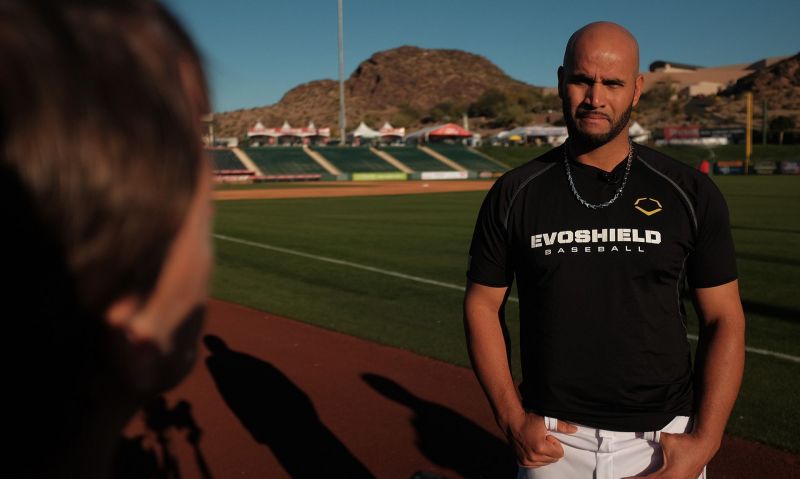 Albert Pujols shares his stories about his experience with American Legion Baseball as he is interviewed during spring training in Phoenix, Ariz. on March 6, 2015. Photo by Lucas Carter/The American Legion.

One of Gary Stone’s favorite stories about Albert Pujols stems from an event when Pujols was 17 years old and playing American Legion Baseball for Stone in Independence, Mo.

“We were in a tournament about 80 miles from here; he always rode to the tournaments with me. And I had a cousin of his who was playing for me, too, and they were having a heated conversation (in Spanish) on the way back home,” said Stone, the American Legion Baseball Committee Chairman. “Finally, Albert just threw his hands up. I said, ‘You want to translate that for me?’ And what had happened during the game was, Albert played shortstop for me and he knew where everybody on the field should be. My left fielder had done something, and coming off the field they were arguing and almost got into a fight, and I benched both of them.”

The gist of the argument between Pujols and his cousin was that Stone was “stupid” for benching Pujols, the best player on the team.

“I said, ‘What do you say to that?’ (Albert) said, ‘I should not fight with my teammates, you should bench me.’ And he was 17 years old when he said that, so that’s a great insight into his character,” Stone recalled.

Pujols homered off Dodgers lefthander Andrew Heaney in the third inning for his 699th career home run, then notched No. 700 off righthander Phil Bickford in the fourth inning. Pujols also now has 2,208 career RBIs, trailing Aaron (2,297) and Ruth (2,214).

The victory helped the Cardinals improve to 89-63 overall, with a 7 ½ game lead over the Milwaukee Brewers in the National League Central Division with 10 games to play. Milwaukee closed the gap tp 6½ games when the Cardinals lost to the Dodgers Saturday night.

Pujols told MLB.com that he was overcome with emotion after No. 700.

“What a special night. To have my family in town and to do it at Dodger Stadium,” Pujols said, noting that his joy of the game returned when he played for the Dodgers last season. “It’s pretty special with the Dodgers fans here, and I get both sides of this. (The Dodgers) get to enjoy this and I get to do it with a Cardinals uniform, which makes it even more special. I’m just thanking God.”

Pujols plans to retire at the end of the season, wrapping up a 22-season MLB career with the Cardinals, Los Angeles Angels and Dodgers. He reflected on his American Legion Baseball experience in 2015.

“He always knew that he wanted to be a major league player. We all thought he’d get there, we just had no idea he would get there as quick as he did, nor could any of us know he’d do what he’s done. He was mature beyond his years, but he was always focused on working hard at it and knowing what he had to do,” Stone said.