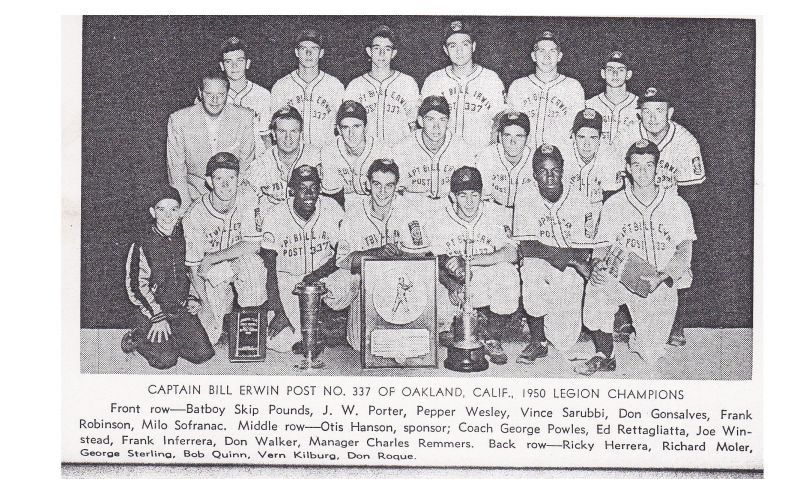 It’s not surprising that the first back-to-back American Legion World Series winner comes from the state of California.

After all, California has won an ALWS-record 17 titles.

But the case can be made that since that state has so many championships, it’s incredibly challenging just to win a state title, much less an ALWS championship.

And the first ALWS back-to-back winner, Oakland Post 337, could certainly attest to the challenges its extraordinarily talented teams faced in winning titles in 1949 and 1950 in Omaha, Neb.

In 1949, the team went 9-1 in national American Legion Baseball tournament competition capped by an 8-6 championship game victory over Cincinnati to finish with a 29-3 overall record.

Legendary coach George Powles mentored the teams. Powles was a veteran coach and scout at Oakland’s McClymonds High School. Frequently called the “godfather of Oakland sports,” Powles coached every major sport offered in the Oakland public schools from 1946 to 1975. Powles — who died in 1987 at age 77 — was revered for his coaching of athletics and life by sports figures ranging from basketball legends Bill Russell and Paul Silas to Baseball Hall of Famers Robinson and Joe Morgan.

He also was credited with helping the Cincinnati Reds sign Robinson, Vade Pinson and Curt Flood.

Herrera was the 1949 Rulon Award winner.

So talented was the Oakland team in 1950 that Robinson, who turned 15 just before the 1950 ALWS, was a reserve outfielder.

In 1949, the biggest challenge was getting out of its regional as it lost 11-10 to Sacramento in a best-of-three Northern California series opener before winning 4-3 and 2-1 in the next two games to advance to the state championship series.

Post 337 scored 42 runs in three regional wins in Winslow, Ariz., and tallied 43 more in three sectional wins in Yakima, Wash., before scoring 48 runs in four games in the ALWS.

In the 1949 ALWS finale, Ray Herrera started a triple play in the second inning, Kilburg picked up the pitching win with five innings in relief and Stratton and infielder Mike Sofranac had three hits apiece. Oakland had lost 13-11 to Cincinnati the day before despite holding an 11-5 lead.

The 1950 team had to sweep a Los Angeles Post 715 team with future major leaguers Billy Consolo and George “Sparky” Anderson that won the 1951 ALWS title to advance.

In the regionals, Oakland scored 40 runs in three regional games in Winslow, Ariz., 27 runs in three sectional wins in Hastings, Neb., and 41 runs in the three ALWS games.

In the 1950 ALWS finale, Kilburg pitched a 4-hitter with nine strikeouts.