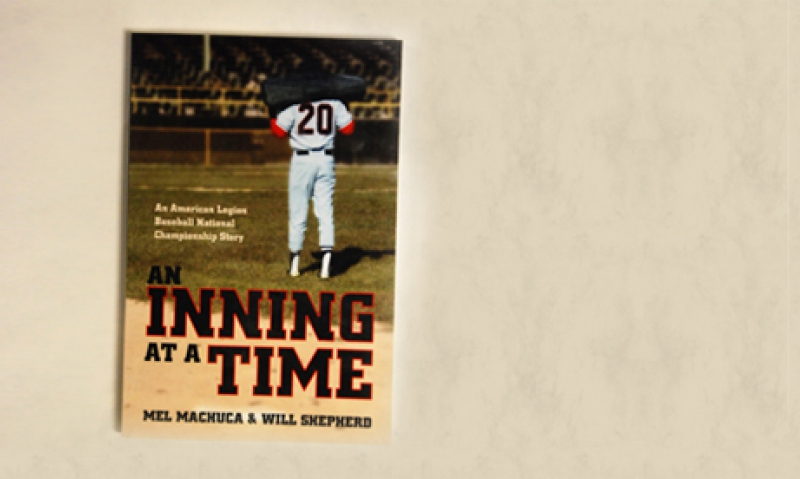 American Legion Baseball Post 50 from South Bend, Ind., is the only Indiana team in Legion Baseball’s 86-year history to have won the National Championship. The remarkable feat achieved 34 years ago is proudly displayed at the Indiana Baseball Hall of Fame and remains strong in the minds of the players and coaches, especially Post 50’s head coach Mel Machuca.

Since bringing home the World Series trophy in 1977, Machuca has had a desire to capture the essence of the team’s incredible journey of substituting passion for fear of playing against stronger teams. In 2010, Machuca fulfilled his desire by releasing a 218-page book titled “An Inning at a Time: An American Legion Baseball National Championship Story.”

The American Legion recently spoke with Machuca regarding the release of the book, which is co-authored by Will Shepherd.

Q: Can you please explain the reason behind writing the book?

A: After our 20th reunion game, it became apparent that fewer and fewer of the current players had any concept of what winning The American Legion Baseball National Championship meant. Although our thoughts, when we won, were that we were merely the first in Indiana and other teams would follow, no one did.

Additionally, many people in the area, and even those in baseball, weren’t even aware that we had won the championship game. So during our 30th reunion we had many questions from people (about winning the Legion World Series), that we started thinking about writing a book to simply explain what and how it happened. As a team, we felt it was a story worth sharing.

Q: What are your overall thoughts regarding the outcome of the book?

A: The story as it unfolds in the book is successful in telling our story and conveying our message to coaches, players and parents of baseball. It generates an emotional response in family and friends of those who played, and it generates a great deal of interest in those who have previously or are currently coaching or playing Legion Baseball.

Q: What do you hope this book accomplishes for the coaches and players who read it?

A: We hope that this will generate interest for more people to participate in American Legion Baseball. We also hope that it demonstrates to coaches that anyone can win the Legion World Series who have strong fundamentals, work ethic and a passion for the game. Our story conveys that any team that is willing to do the work and play for today can win the championship game. It doesn’t take superstars; it takes consistency and coaches trusting each player to reach his or her full potential.

Q: Did you learn anything new about the team or even yourself after completing the book?

A: When Will Shepherd and I began writing we thought we were writing about a super strong baseball team. At the books completion, we realized that we had conveyed a story about an ordinary team, relatively speaking, that accomplished an extraordinary feat through teamwork. Each player had a role and contributed to the accomplishment.

Q: As a Legion Baseball coach, how does it feel to have won a National Championship?

A: The honor of winning and the recognition it brings was unexpected. The way that other coaches, parents, players and American Legion people see you is remarkable. There are so many coaches that I have known in Indiana and across the country who have developed great programs; I wish they could win so they could experience what I and my team of coaches and players felt. I have coached Legion Baseball for 23 years at this level, and I have only experienced one Legion Baseball National Championship. During my time as a coach, I have realized that the most important thing is teaching youth to believe in themselves — that’s what the American Legion Baseball program is all about.

To purchase “An Inning at a Time” for $16.95, visit www.Amazon.com, www.Inkwaterbooks.com or www.Powells.com.