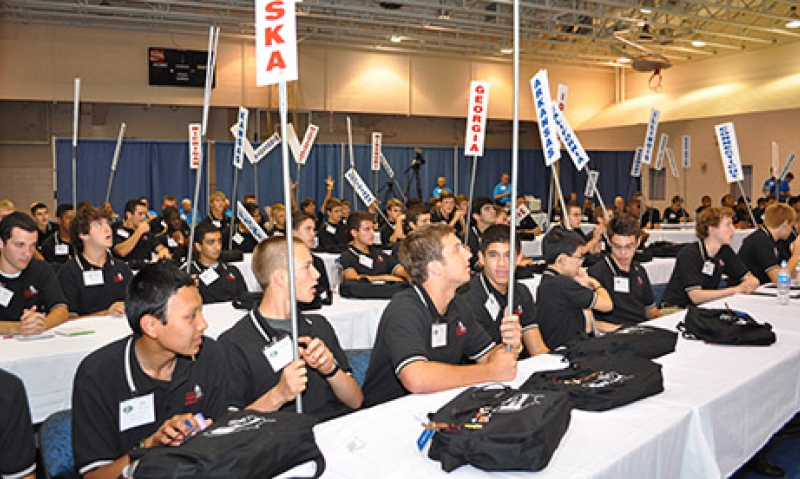 Boys Nation senators have been taking photos with each other and program staff from the moment they arrived at Marymount University. But they got a once-in-a-lifetime photo opportunity Tuesday morning when they stepped foot in the East Room of the White House.

With excitement beaming from their faces as they stood on risers, the senators roared with applause and cheers as President Barack Obama entered the room with a smile. Obama's smile remained as he took a few photos with the young men and grew more enthusiastic as he excitedly shook the hands of all 98 senators.

"I worked on President Obama's campaign in 2008, and I've always been a huge fan of him," said Grady Ward from Essex, Vt. "It was just amazing to see our leader come talk to us, Boys Nation. And before I left home, everyone I talked to told me to tell the president that Vermont loves him. So when I shook Obama's hand I said, ‘the state of Vermont sends its love.'"

"There are no real words to describe the experience of meeting President Obama," said Luis Zamora from Washington, N.J. "I'm used to seeing him on TV so to see him in person you realize he's just a regular guy who is down to earth and humble; he even asked us if we played basketball. I am going to remember this moment for the rest of my life."

As the saying goes, the senators were on cloud nine after their meet and greet with the president. But by early afternoon and into the evening, their energy and focus was solely on electing the 2011 Boys Nation president and vice president.

Within hours after the debate, and a lasagna dinner, elections were held. During this time, a few senators from the Nationalist and Federalist party platforms spoke on behalf of their nominated president and vice president to help push votes in their direction. Afterward, both parties candidates voiced one more time the positive changes that will be made and bills that will be passed if elected. Then, it was time to vote.

As tradition holds, the two senators representing their Boys State program stood together holding their state sign to cast their vote. As soon as all 98 senators announced their vote for both president and vice president, and ballots were tallied, the 2011 Boys Nation winners were announced. In the end, congratulations rang loud for Nationalist Michael Herbert as president and Federalist Ben Attia as vice president.

"It is my honor to be elected 2011 Boys Nation president," Herbert said. "I look forward to the next three days, getting our bills passed and tackling some of our nation's prickliest problems. This program is second to none as far as civics, government and service to country go. It's very exciting to be the leader of this program, to be the president."

Attia shared many of the same sentiments as Herbert in regards to the honor of being elected.

"It was really just a humbling experience to see so much support from the senators," Attia said. "I am very honored to be able to serve the senate, the Legion and the country. My job is to make sure the senate is running smoothly and to help push the agenda along, and I think that is something I can do very well."

Today, the president and vice president will be sworn in to office and four Boys Nation alumni will speak to the senators.