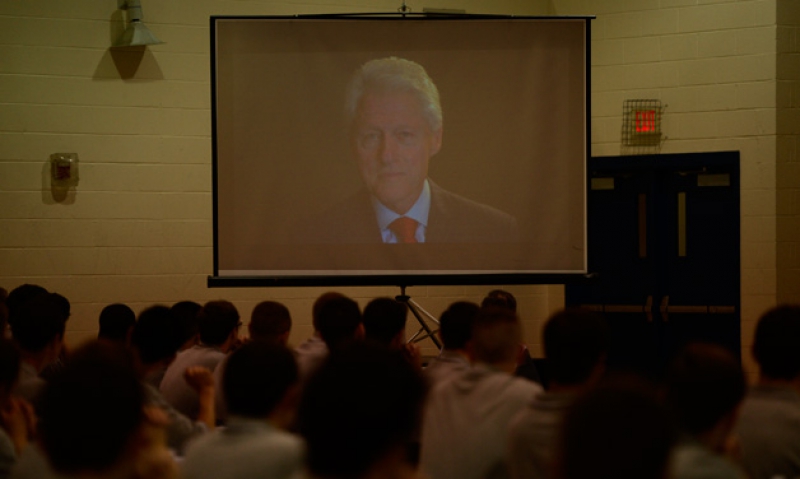 This year’s 68th session of Boys Nation marks the 50th anniversary of one of the most iconic and cherished moments in the program’s storied history: when a camera snapped a picture of a baby-faced Bill Clinton shaking hands with then-President John F. Kennedy.

Clinton, a 1963 Boys Nation graduate, was in the White House rose garden on July 24, 1963, with the senators from his class as Kennedy addressed the group. As Clinton recalled in a 2003 ABC News broadcast, he “muscled his way” through the masses and made sure he was front and center when Kennedy approached to shake everyone’s hands.

As legend has it, the moment inspired Clinton to enter a life of public service.

Clinton commemorated the 50th anniversary of the famous handshake and his graduation from Boys Nation by sending a special video address to the 67th session. It was played Saturday morning for the senators during their general orientation meeting.

In the address, Clinton discussed the impact that Boys Nation had him on him, telling the delegates that the next week can be a precursor to a life of service – even if they don’t plan to enter politics.

“I hope that whatever you choose to do in your lives, whatever career you choose, that your week in Boys Nation will inspire the same desire to give back to your community, your country and the people all over the world,” Clinton said. “You don’t have to go into politics or the military. Whether you are an entrepreneur, doctor, teacher or lawyer, whatever you do, you can be of service to others.”

The current Boys Nation senators watched intently as the address from the former president played on a projector screen.

“It was absolutely amazing,” said Michael Tummarello, a Federalist senator from Montana. “He is a former president with a busy schedule, going all over the place to do diplomatic work and all the other things he does. He has taken the time out of his schedule specifically for us.”

Alex Higginbotham, a Federalist senator from Missouri, said Clinton’s gesture is a testament to the lasting greatness of Boys Nation.

“I think it’s an incredible example of what kind of people come out of this program,” Higginbotham said. “Boys Nation not only produces people like Bill Clinton who became the president of the United States, but it so impacted his life that even with his busy schedule he continues to want to be a part to it.”

Clinton ended the address by wishing the senators well during their next week in Washington and the rest of their lives. He emphasized that a life of service is even more possible with technological advancements developed since his graduation, like the Internet and mobile technology.

“The opportunity to serve, to advance the cause of freedom and to empower people everywhere to make the most of their God-given skills is greater than it has ever been,” Clinton said.