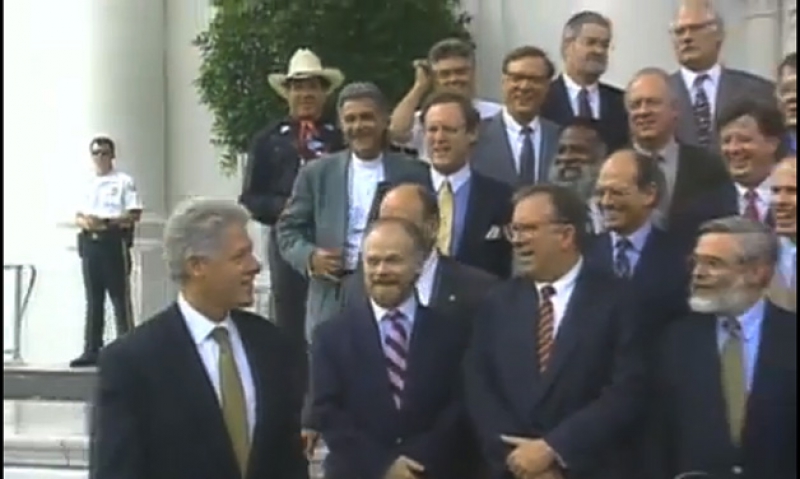 The Boys Nation class of 1963 gathered at the White House for a reunion in 1998. Photo courtesy of The Clinton Foundation.

In 1963, 98 American Legion Boys Nation delegates found themselves in Washington, D.C., meeting a president who would be assassinated just four months later. The most famous alumnus of that year is former president Bill Clinton – he used a picture taken when he met Kennedy during his campaign. But in 1963, Clinton was just one of two Boys Nation senators from Arkansas.

Clinton commemorated the 50th anniversary of the famous handshake and his graduation from Boys Nation by sending a special video address to the recent 67th session of Boys Nation in July. In the address, Clinton discussed the impact that Boys Nation had him on him, telling the delegates that the next week can be a precursor to a life of service – even if they don’t plan to enter politics.

Elected Boys Nation president in 1963 was Richard Stratton from Illinois. Stratton obtained a bachelor’s and a law degree from Harvard, with a master’s from the London School of Economics and Political Science in between. He is an attorney based in San Francisco, and immediately waxes eloquent on his Boys Nation experience.

"Boys Nation is an extremely important program of the Legion which has gathered many talented young men and helped mold them into leaders of the country," Stratton said. "President Clinton is probably our most famous alum, but in our 1963 class was also congressman Jim Ramstad of Minnesota (from North Dakota at Boys Nation), who had a very distinguished career and is now retired. Many others in our class went on to great careers. The person who organized our first reunion was Pete Johnson, who became a judge in his hometown of Birmingham, Ala. He tracked us all down and got us started.

"We have had three reunions so far: in 1993 (30 years to the day from when we met President Kennedy), 1998 and 2003, when we went to Boston and met at the Parker House Hotel in the same room where JFK first announced he would run for Congress in 1946, having returned to Boston a war hero because of the PT-109. We went to the Kennedy Library as a group and received VIP treatment. The 1993 and 1998 reunions were in Washington, and we went to the White House courtesy of our First Alum.

"A number of good friendships have sprung from our group getting together. And we were all much affected in a positive way by the Boys Nation experience, the amount of attention given to us by top officials and our Legion counselor, and, of course, the generous and enlightened investment of time by President Kennedy when he met us in the Rose Garden.

"As for me, it completely changed my life. Boys Nation lifted me from a small rural town in Illinois to a national perspective at a time of great change and importance in the country. President Kennedy admonished us to 'get involved,' not simply be spectators on the sidelines, and we all went home and did that. Our Boys Nation class is in many ways a microcosm of the 60s boomer generation and all the social and political change we experienced in the United States ... I still have school friends who run the Legion post in Leland, Ill. – my hometown – and they have a picture hanging in the Legion hall of me shaking hands with President Kennedy."

Fellow alum Ray Pentkowski, who recently retired after 40 years as an educational administrator, said "the entire experience, from seeing JFK to attending reunions, has been most enriching. I consider Rich Stratton and Larry Taunton to be some of the best people and best friends anyone could ever know."

ABC News filmed the 1998 reunion and conducted interviews with several former delegates. A clip from the footage is available on YouTube from the Clinton Foundation.