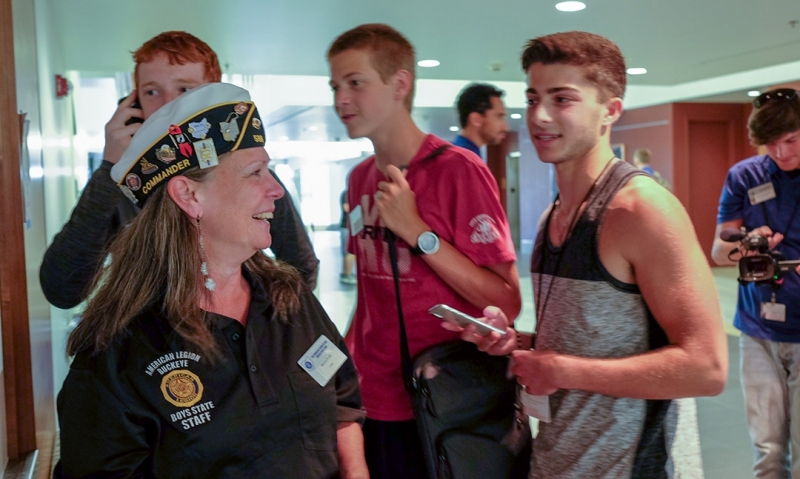 As program director of Oklahoma Boys State, Clay Ballenger sees his position as a critical one in sharing The American Legion’s story.

Ballenger’s own experience as an Oklahoma Boys State delegate in 1990 inspired his military and police service, and he credits it to the Legionnaires who he met through the program.

“Once I got to Boys State and learned about The American Legion, I saw these Legion members who of course had done their service in the military and continued to serve,” he said. “And they cared enough to be here at Boys State for somebody like me that they didn’t even know and spend their time away to try and help me be a better person, to me, that just really opened my eyes about the type of people that are American Legion members and I first of all wanted to serve, and they inspired me to go on and serve my country in the military, but then also I couldn’t wait to become eligible to join The American Legion.”

Ballenger and his staff make it a point to emphasize the Legion’s story during Oklahoma Boys State, with Legion family members encouraged to wear their Legion cap and talk about the organization.

“We have Legion Night, of course like I said we wear our caps, we explain about the Legion family, we invite speakers from the Sons of the American Legion and the Auxiliary to come and visit with us. To me, there’s no better way to highlight what we do as the world’s largest veterans organization than at the Boys State program. And to me, as director of Oklahoma American Legion Boys State, it is definitely at the front of everything we do. And we are very proud of that fact. And I know when these several hundred boys leave here every year, they know what the Legion is, they’re going to tell others about it, and hopefully like me someday they’ll go on to serve and join themselves and carry on the tradition,” Ballenger said.

“Because you’ve got a lot of young men out there interested in the military, and who don’t really associate in their own families or their own lives with someone in the military. And so if they can see someone who’s kind of a younger mentor, someone who’s like an older brother or maybe a father figure, serving in uniform, that kind of gives them the avenue to assess them and see how it’s like, ask the questions, what’s it like to serve, and some of them even take that plunge and are that interested that they want to know the process of getting in, whether it’s a service academy or an ROTC program, or even enlisting, and having those people that are currently in the system can really help them bridge that gap and show them it’s cool, it’s something neat to do, it’s a great way to serve your country and continue that tradition that’s got us where we are today in America,” Brooks said.

Past Buckeye Boys State program director Jerry White noted that the Ohio program’s history of naming its “cities” after former presidents of the board of trustees, many of whom are on staff during the week, helps create a deeper connection between the Legionnaires and the delegates.

“So the boys, rather than reading something about so-and-so was this, that and the other thing, they’ve got him sitting right in front of them,” White said. “That’s helped this program immeasurably.”

“That’s what we do at Boys State; we try to educate patriotism, government, pride in what we do. As we share those stories, that’s how we pass on patriotism, that’s how we pass on what we care about, what’s important to us. That’s how we spread the word of our great nation and our great country. So it may be difficult to open up about past stories, experiences you’ve had, things that have touched you deeply. But I guarantee you that if people know, you will spread patriotism and you will spread pride for your country and your flag.”

Another avenue for Legion family members to share their stories is Legiontown.org. The sharing of stories provides inspiration to posts, squadrons and units located throughout the country on how to promote the Legion in their communities.