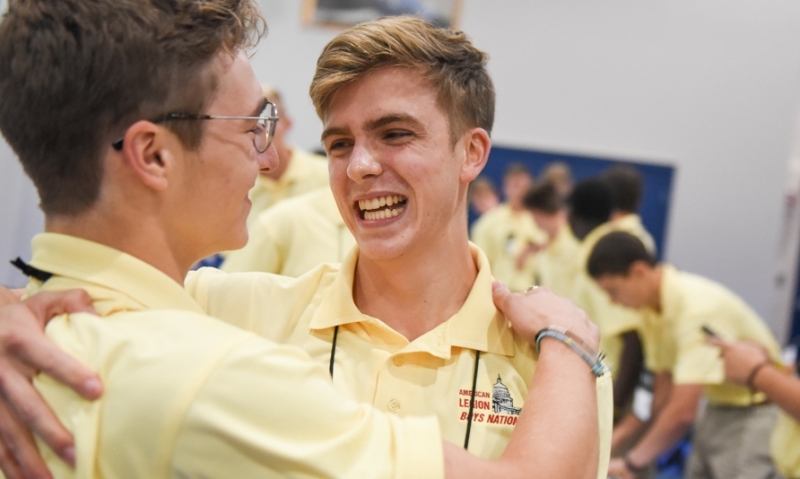 As soon as he arrived at American Legion Boys Nation, Joshua Cheadle was “inspired” by how passionate and excited everyone was.

Now, he’ll lead that passion as president of Boys Nation 2018.

“I mean, it’s just such an incredible honor, and I thought it would be great to have this responsibility, but it’s not (just that),” Cheadle said. “It’s great to know that a bunch of people saw my speech, heard my message, and thought that I would be the best leader for them, and for that, I am so grateful, and I am going to work so hard to make sure that this is the best experience possible.”

To do so, Cheadle said he’s focused on making sure his fellow senators achieve what they want to do the rest of this week.

“What I’m trying to achieve is not what I want to do, it’s making sure that everyone else can do what they want to do and that’s helping them pass their legislation, talking to them, and just making sure that everything’s passed, everything’s done with honor, with integrity and we do it to the best of our abilities,” he said. “Make this a memorable experience not because this is Boys Nation but because of what we accomplish at Boys Nation.”

“Originally when I came here, I came thinking that I would be running for president,” Razvi said. “But as I got to know the positions more and more, I thought I would be most well-suited to be the vice president, because of my experience in parliamentary procedure, and also in policy, and so there were going to be a lot of people who were experienced in just that policy side to be president, but I wanted to make sure the person that got vice president had that breadth of knowledge of both parliamentary procedure and policy as well.”

Before the voting, the presidential candidates answered questions on a variety of topics, including the U.S. embassy in Jerusalem, the opioid epidemic, Russian interference in U.S. elections, media bias, civil discourse and illegal immigration, while the vice presidential candidates weighed in on topics including tension between law enforcement and minorities, the deficit, negative campaign ads, and the legalization and subsequent taxation of marijuana.

“I feel like once it gets past the party nomination process, and you’re down to the last two candidates for each position, then it really just boils down to who do you think is going to do the best job representing you, your beliefs, and also getting the most work done. So I’m honored to be the one that they think will do the best work and get the most work done and I hope to prove them right.” – Boys Nation vice president-elect Aabid Razvi of Texas.