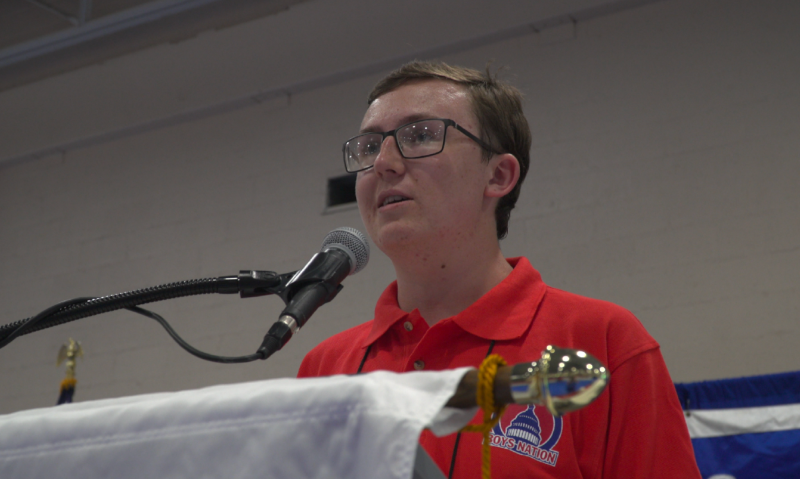 The numbers weren’t quite in Mason Moore’s favor when the field of candidates for president pro tempore at American Legion Boys Nation were announced Saturday night.

Of the 11 candidates seeking their fellow senators’ vote on the first day of business at American Legion Boys Nation 2019, eight, including Moore, were from the Nationalist party. And four — Moore, Arkansas’ Gavin Michau, Alaska’s Alden Jerome and Arizona’s Alexander Diaz — came from the Adams section.

Moore admitted those numbers factored into his consideration on whether to run for the position. Ultimately, he made the right choice.

“We were having some serious discussions about, do we want to run this many candidates? And we eventually decided that we did, and since we had multiple rounds of voting, it wouldn’t be a problem. We did have to work more quickly than we would have had to otherwise in the oncoming rounds of voting to ensure that the votes coalesced around a single candidate,” Moore said.

“I wanted to be able to do something that not only allowed me to have a wide range of latitude and influence on the floor, but also allowed me to preside over proceedings — I also have some experience in the area, so it was a pretty easy decision to go with something that allowed me to exercise parliamentary procedure,” said Moore, whose experience at Idaho Boys State included mayor, president pro tempore and lieutenant governor.

Secretary of the Senate

After the president pro tempore election, senators voted for the secretary of the senate. Wisconsin’s Manish Raj defeated fellow Nationalist Alden Jerome of Alaska on the final ballot, emerging victorious from a field of seven candidates.

“I chose (to run for) secretary because, quite honestly, I have not been too involved in government in my life. That’s just never been emphasized as an option,” Raj said. “But now, after Badger Boys State and currently at Boys Nation, I realize that government really is an incredible opportunity to show your involvement in something, that you can really make a difference in. And I think secretary is just the best way I can serve.”

The secretary maintains the journal of the Boys Nation Senate and examines all bills, amendments and resolutions.

The 2019 Boys Nation senators arrived at Marymount University on Friday to begin their “week that shapes a lifetime,” the vast majority arriving in the D.C. area by air but some of the closer senators arriving by car.

After checking in and receiving their room keys and shirts, the senators split into their sections — Adams, Jefferson, Madison and Washington — where section counselors introduced themselves and informed the senators what to expect in the week ahead.