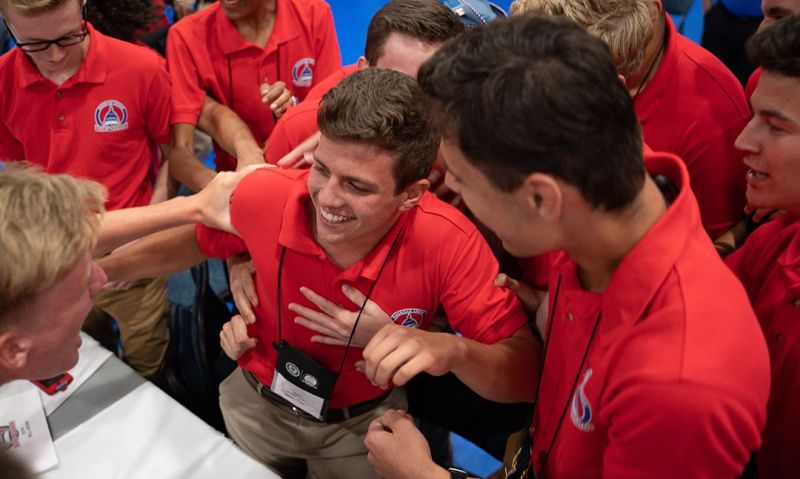 The final question posed to the candidates in The American Legion Boys Nation 2019 presidential debate asked them to identify the most important leadership behavior for a president.

“It’s twofold. It’s integrity, but it’s also humility,” said Lou Acevedo of Massachusetts. “A leader has to be true not only to himself, but also his constituents.”

Acevedo’s sentiments rang true with his constituents, who elected him president of Boys Nation Tuesday night.

“I’m humbled. Thank you,” Acevedo said after his victory.

“If I voted for myself, it would just feel synthetic,” Acevedo said. “In the same way that there’s just certain things to people that bug them, voting for myself was one of them. I think that it’s not my job to vote for myself; obviously I have a vested interest in winning; there’s no point in trying to prove that through the ballot box.

“The best thing I could do with my vote was give someone else a chance, because for a very long time in my life, that is something that the people around me never had, and as a result, I think it’s my duty that, if I have the integrity a lot of people claim that I have, then I should demonstrate it.”

In his final speech before the vote, Acevedo said there were two things that bound the Boys Nation senators together, regardless of their background.

“We all have one aspiration, of being a man. Perhaps with some, like myself, the definition of a man is a routine and familiar one — I work a manual labor job, I’m a blue collar guy, I go to a trade school, I like cars and metalworking and all the traditional manly things in life,” he said. “But to some, being a man is something entirely different … none of us would be here today if we were not trying our best to be a man, whatever that means to us.

“Our other common status is that we are all Americans, and there are few other things than this with the ability to rally to a common goal. … Naturally, we must find someone who represents the ideal that we as a nation, not merely as a party, hold true.”

Acevedo said he decided to run for president to prove to himself and his community what he was capable of.

“I thought that it was kind of my duty, not only to the American Legion post that sent me, but to all the people that I work with, and to all the people that I go to school with and just everybody that I interact with in Massachusetts, that there needs to be somebody who truly represents the will of the people,” Acevedo said. “And I wanted to restore the youth’s belief in American democracy.”

In his final speech before the voting in the vice presidential election, Thomas Penley of Montana said, “I hope to make everyone back in Montana proud today.”

That he did, defeating Nationalist Ryan Dudley of Connecticut.

“I think Montana is one of the smaller Boys State programs, but the amount of issues and heart and I think actually political interest Montana has is a lot bigger … than a lot of other states,” Penley said.

Penley had plans to run for vice president before arriving at Boys Nation, but once he got to Marymount University, he considered not doing so.

“I got here, and I was intimidated against the fact that I would be going out meeting people from California and Ohio, which had huge Boys State programs … and they would just be these intelligent robots that I wouldn’t be able to talk with or understand. That was not the case,” Penley said. “All of us are human beings, and it was really cool to see us gel and everyone from their own state realize that they can hang with anyone in here. That’s why I ended up running.”

Tuesday’s two Federalist victories mean an even split of the four elected officials at Boys Nation, as Nationalists Mason Moore of Idaho and Manish Raj of Wisconsin were elected president pro tempore and secretary of the senate respectively on Saturday.