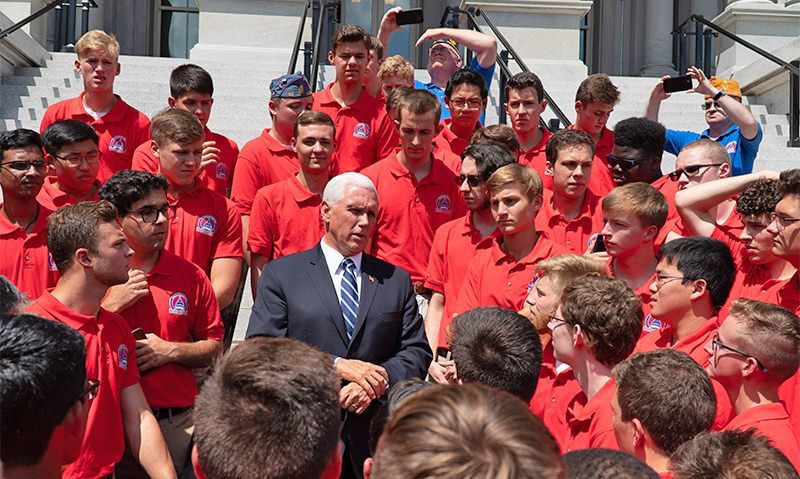 Vice President Mike Pence climbed the steps at the Eisenhower Executive Office Building (EEOB) and encouraged the senators of American Legion Boys Nation 2019 to circle him and ask questions.

Scheduling conflicts may not always allow Boys Nation to visit with the president or vice president, but when it happens, it leaves a lasting memory on the senators.

“My heart was beating very fast because suddenly everyone got quiet and I looked to my left and I thought, that must be him (arriving in his motorcade),” said Samuel Osa-Agbontaen of Massachusetts.

“Watching him come out of his SUV with his security team, it’s hard to put into words,” added Conner Grant of Michigan.

The Boys Nation senators found out Tuesday night, after the presidential and vice presidential elections, that they would be going to the EEOB to meet Pence the next morning. The announcement from Director of Activities PNC Dale Barnett brought exuberant cheers from the senators.

“When they said we were going to go to visit, I said, I hope this pulls through,” said Isaiah Place of Wisconsin.

The senators from Boys Nation and American Legion Auxiliary Girls Nation arrived at the EEOB Wednesday morning and, after briefly mingling, Boys Nation delegates and staff were led to the steps leading to the West Wing.

“You couldn’t really see the White House from where we went in, and then you went down the stairs, it was right there. It was absolutely beautiful,” said Colby Lewis of Alabama.

Pence’s motorcade soon arrived, and after a photo with the senators, Pence answered the young men’s questions.

“It was definitely cool to see such a prominent figure with his basis of faith,” Place said.

“Seeing how open he is, even though he doesn’t know us whatsoever, came right in the middle of us … seeing how trusting he is and how open he was with us was just absolutely amazing,” Grant said.

“It really took me back to elementary school, learning about the presidents and vice presidents, we’d have the photos of each of them on the wall, and now it’s unreal to think I can go back to my old classroom and say I’ve met one of these men,” Osa-Agbontaen said.

“Whether you’re conservative or Democrat, you may not agree with this man and his beliefs, but it wasn’t a very political talk, it felt kind of like a father figure telling us information, like a teacher or professor … giving us advice. It was an extremely beneficial experience, it was a very cool experience, and I don’t think I would have ever got to do if it wasn’t for Boys Nation and The American Legion,” Lewis said.

The Boys Nation senators will meet Thursday with their U.S. senators or their staffs on Capitol Hill, alongside their Girls Nation counterparts.

Boys Nation President Lou Acevedo of Massachusetts and Vice President Thomas Penley of Montana were officially sworn in Wednesday morning before the senators’ visit with Pence.