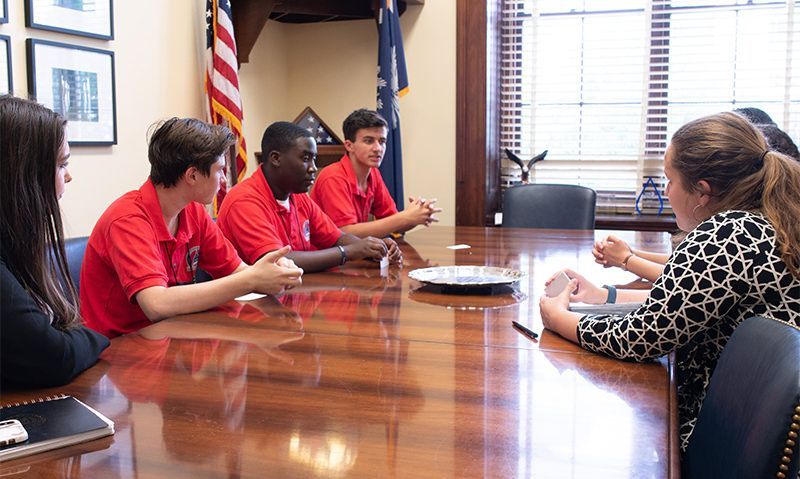 Each year, the delegates to American Legion Boys Nation and American Legion Auxiliary Girls Nation are required to bring legislation — be it a complex bill or a simple resolution — to Washington, D.C., and attempt to convince their rivals across the proverbial aisle to support that legislation.

And every year, Boys Nation and Girls Nation head to Capitol Hill to meet with their members U.S. senators and representatives, or their staffers to sell them on that legislation. They did so again on Thursday.

Often, those pieces of legislation reflect similar efforts in the U.S. Congress. Sam Densmore of South Carolina introduced the Fair Tax Act at Boys Nation. The bill “would eliminate most taxes in favor of a 23-percent inclusive consumption tax … year after year it’s put in the House and doesn’t receive much support," he said. Densmore’s colleague from South Carolina, Travis Johnson, said there were three reasons it’s important for the senators from Boys Nation and Girls Nation to meet with their representatives in Congress.

“They’re the ones who are in charge of making policy decisions today that affect our lives and our families’ lives," Johnson said. "But more so than that, it’s important for us to meet them so we can allow our voices to be heard and share with them our pieces of legislation that we brought up during Boys Nation, and allow them to know as young people what we’re thinking about and what kind of changes we would like to see occur across the country.

“And … at the end of the day, a lot of us have passion and a deep desire to enter politics and government, and if we truly want to be successful, we must meet with those already there, and learn tips, advice from them so we can reach where they are at today.”

New Mexico’s Elijah Ruiz echoed that, saying, “It’s good to go to the Hill and see who’s representing you, it’s helpful when you go back to the state and talk to people.”

The reality of a busy day in the Senate meant that Densmore, Johnson, and their Girls Nation counterparts, Karisma Virk and Izabella Salameh, didn’t get much time with Sen. Lindsey Graham, who they were eager to meet.

Nevertheless, Densmore said, “I’m already going to go back on the best way possible because I’ve had these great conversations that meant a lot to me with my Congressman (Jim Clyburn).”

Indeed, many Boys Nation and Girls Nation senators were able to briefly meet with their representatives from the House as well on Thursday.