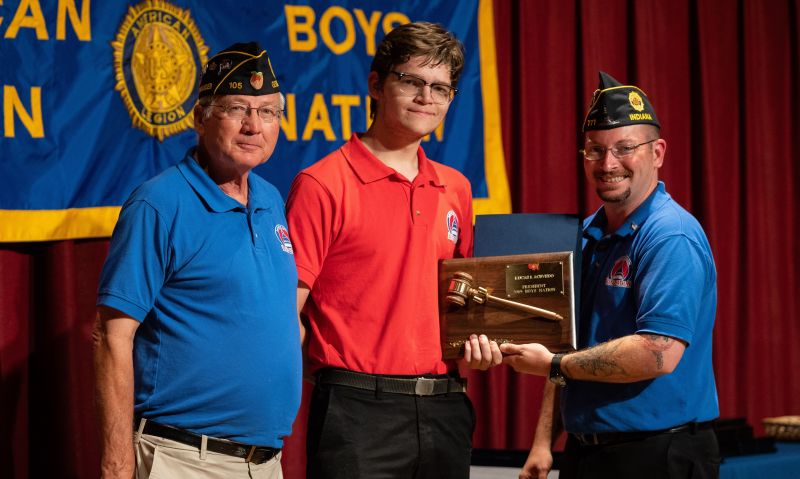 In his final words to his fellow senators Friday afternoon, American Legion Boys Nation 2019 President Lou Acevedo spoke about his surprise at the bonds he formed at Massachusetts Boys State.

“It was so odd to me that a bunch of 17-year-olds could bond over a bunch of simple things in a week. But Boys State seems so much smaller now. It’s so different now seeing some of the bonds I’ve made here,” Acevedo said.

The 74th annual Boys Nation program came to an end Friday with a final Senate session and the evening’s graduation ceremony, capping “a week that shapes a lifetime.”

Acevedo said the bonds formed this week among the 100 senators are “the closest bonds that I’ve ever had in my life.”

“I think I speak for a lot of people when I say the fraternity here was amazing,” he said. “Last night, my section had some serious and really honest introspective conversations. It took a lot for some of us to say the things we did, it made a lot of us emotional.”

The Senate capped their session with an energetic debate over a bill aimed to address gerrymandering issues by providing incentives to state legislatures for creating non-partisan redistricting. The senators also passed an apparent Boys Nation record 61 simple resolutions thanking their sponsoring posts, departments and others.

At the evening graduation ceremony, Acevedo and Vice President Thomas Penley of Montana each received $2,500 scholarships funded by Southern Company, a leading energy company serving 9 million customers through its subsidiaries.