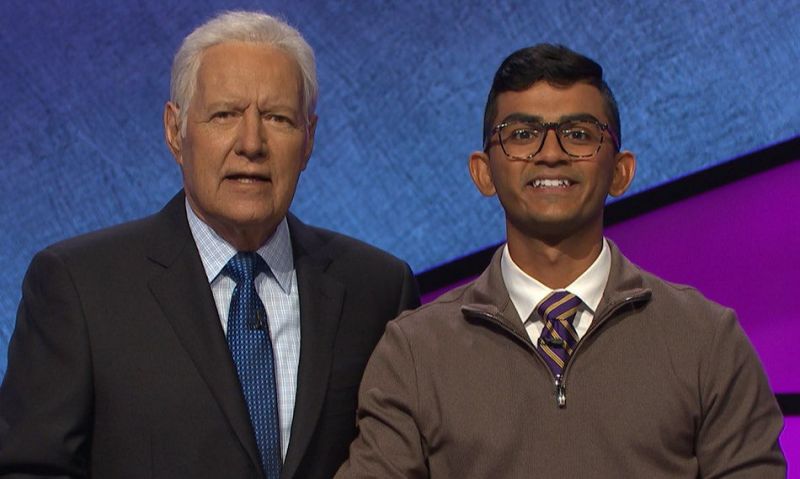 Aravind “Vinny” Byju, who served as American Legion Boys Nation President in 2015, can add another accolade to his resume — Jeopardy! champion.

Byju, a native of Florida and a student at Harvard University, won the Feb. 10 episode of the long-running TV quiz show despite being in third place after each of the first two rounds.

Byju entered Final Jeopardy with $6,200, trailing returning champion Gauravi Shah ($11,800) and challenger Natalie Hadjiloukas ($12,800). But Shah and Hadjiloukas both made big wagers, and when all three contestants missed the answer, Byju ended up winning, with $3,399.

“Luck was on my side,” Byju said in a phone interview this week.

The Final Jeopardy clue, in the category “Sports Terms,” was: “A member of the British Amateur Athletic Club wrote this 1867 set of 12 regulations whose name honors nobleman John Sholto Douglas.” The correct question was, “What are the Marquis of Queensbury rules?”

Byju said he looked at a number of different wagering strategies as he prepared for his appearance on the show. A longtime fan of the show — “I grew up watching Jeopardy! and always enjoyed it,” he said — Byju successfully passed Jeopardy’s online test about two years ago, then was put into the contestant pool after testing and a mock game in New York City a few months later.

“I kind of forgot about it,” Byju admitted, but “lo and behold about a year and a half later, it was this past October, I got a call from one of the contestant coordinators, said they wanted to do a taping with me.”

Byju flew to Los Angeles for the tapings in late November. Under the rules of the show, he couldn’t tell anyone how he fared until the shows aired.

“I didn’t tell a lot of people I was taping, because I knew they would ask and I love talking to people, I was scared I would let something slip,” he said.

Byju was unable to successfully defend his title in the Feb. 11 episode, as he was again in third place after each round. All three contestants were correct in Final Jeopardy, and Byju added another $1,000 to his winnings with his third-place finish.

The Feb. 11 Final Jeopardy clue, in the category “American History,” was: “After statesman & banker Robert Morris turned down a job offer from George Washington, this man took the job.” The correct question was, “Who is Alexander Hamilton?”

Byju admitted being on the show was “nerve-wracking.”

“When you’re watching at home, screaming at your TV, it’s one thing. I tried to prepare … but nothing gets you in the actual zone of standing there with the lights and the music and Alex Trebek walks out. The whole experience was pretty surreal to me,” he said.

“I don’t even remember hitting the buzzer a couple times. … In retrospect, it was kind of a happy, exciting blur,” Byju added.

Byju drew a laugh from host Alex Trebek during the Feb. 11 episode, when Trebek noted that Byju was studying government. “With a view to doing what?” Trebek asked. “Not government,” Byju answered with a smile.

“I was being a little bit facetious,” said Byju, who will graduate in May. “I have been studying government here at Harvard, and I have really enjoyed it. It really all started when I went to Boys State, that really got me into government and public service.”

All in all, Byju called his time on Jeopardy! “a really phenomenal experience.”

“I’m really blessed to have been able to go on Jeopardy!” he said, noting that the show’s crew “are over-the-top great in what they’re doing.”

“Jeopardy! has always been a cool community to me, because I grew up I was really nerdy, I liked watching the show, because it was cool to see other nerdy people playing and winning it.”

He’s also been overwhelmed by the support from friends, family, and even Legion members and his Boys State peers who reached out to him.

“People making me feel like a mini-celebrity for a day, I feel very privileged to have that,” Byju said.