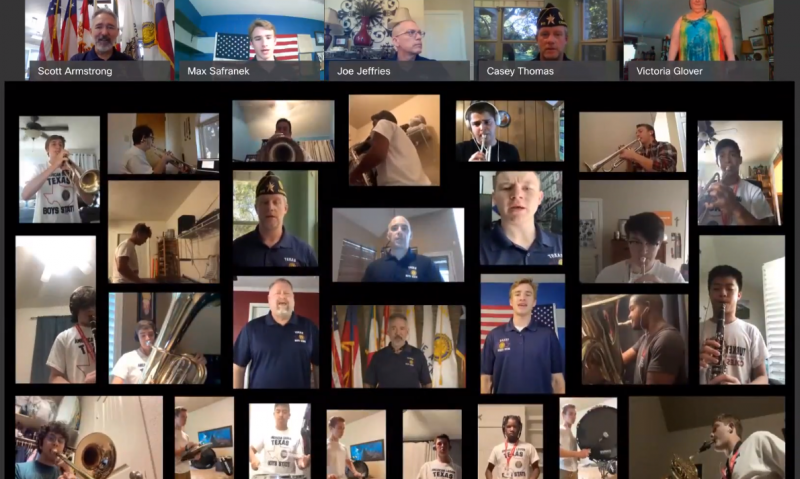 Texas Boys State staff members worked late into the night to edit a mashup of individual musical performances from statesmen and counselors performing the Texas Boys State song to be played during the program's virtual session, June 6-12. Photo provided.

There were bound to be a few hiccups when Texas Boys State went virtual this summer in the wake of the COVID-19 pandemic.

Making sure Boys State statesmen were on mute was one of the first issues to address.

“One of the funniest parts about the muting, we learned this the hard way when we said ‘OK, we’re going to open the meeting with the Pledge (of Allegiance),’ and of course as soon as we said, ‘Let’s pledge allegiance,’ everyone said OK and they all went off mute and then all of a sudden they were all doing it at once, we had feedback (galore),” said Daren Brabham, Texas Boys State’s assistant director of media relations.

“From then on, we were like, ‘We’re going to do the Boys State song, but only (Director) Scott (Armstrong) will sing. You’re all going to stay on mute.’ So Scott finally got the solo he always wanted,” Brabham said.

Originally scheduled to meet on the University of Texas campus June 6-12, the pandemic shut down the university and prompted Texas Boys State leadership to consider an online session.

After receiving approval from the Department of Texas’ executive committee, staff went to work crafting a schedule that would hew as closely as possible to the regular face-to-face schedule while addressing the idiosyncrasies of an online-only schedule.

“We did a technology stress test three or four days before the program just to make sure things weren’t going to break. You still never know until you’re in it live,” Brabham said. “We had some moments where someone would enter the room and they weren’t on mute and it was like, their dog was barking and you don’t know how to mute them. Or we don’t know who is actually the host. Some fumbling around that because none of us has actually used WebEx at this scale, but pretty minor hiccups and they were easily addressed.”

Outside of not having to cancel Texas Boys State 2020 completely, there were unexpected benefits from the virtual session — more sleep, for instance.

“The juice of being there (in person) is immense but because they’re home and having more sleep than they otherwise would, may have contributed in a way to an actual more hearty virtual experience (for the statesmen),” said Texas Boys State Chairman Casey Thomas, who was impressed by the engagement the statesmen showed.

“I think we were pleasantly surprised at how more thoughtful and frankly more moderate a lot of positions were, a lot of the bills were,” Brabham said. “There wasn’t this kind of knee-jerk response to clown or try to rile people up because they’re not physically present, there’s no cheering and giggles. I think because of that people put more thought into what they were actually saying, so it was sort of an unexpected benefit.”

The virtual session also gave statesmen the ability to participate in more sessions than logistically would have been possible on campus. For example, House and Senate members could participate in party platform committee meetings, and the Texas Boys State media team could cover events much more quickly.

“We saved on all that travel time between buildings, we saved on the logistics time of getting through a cafeteria line with 1,000 kids,” Brabham said.

The 2020 edition of Texas Boys State drew 659 participants, a little more than half of the program’s usual number. And staff numbers were down as well.

But Thomas and Brabham noted that the immediate feedback from both statesmen and staff was positive.

Thomas shared an email from Sean Varghese, who was sponsored by Post 178 in Frisco, Tex. Varghese wrote, “The camaraderie aspect of Boys State, once again in spite of the lack of physical proximity, managed to creep its way into our conversations and we would stay in calls for up to an hour just talking and getting to know each other. We made the most of what we were given, and as a result we were able to make unique and lasting friendships. I hope that one day we might run in to each other, and reminisce about the crazy experience that was Boys State 2020.”

Thomas noted how important each staff member was in making the session possible.

“We needed everybody. We needed our younger folks that are very savvy in the skills of social media and technology and making it work,” Thomas said. “And then we needed our people who had been around for 40 years on the human dynamic and had seen lots of tread wear to keep it calm and centered within the normal scope of how we do Boys State.”

“What I appreciate is we were allowed to take this extraordinary team of people, put our helmets on, get in this mission, give it the best shot possible,” Thomas said. “I’m almost moved to tears of the volunteers who give their time to do this because they want to, because it’s an American Legion program that actually impacts lives.”

While it’s too soon to see what may happen next year, Texas Boys State staff are already thinking about what lessons from 2020 they can apply to the program in 2021 and beyond.

“When we did Legion Night, and I could see all the Legionnaires logging in from their homes … we’re going to find a way to leverage that,” Thomas said.

Brabham talked about creating a virtual discussion space for House and Senate members and platform committees while also reducing the paperwork required for filing for office and voting.

“I think another thing too is, logistically speaking, check-in is always a bit of a nightmare because we have 1,000 guys, their families, Legion buses dropping people off, they assemble out in the heat of Texas, winding their way around this dormitory, it takes all afternoon in the heat to try to get people checked in,” Brabham said. “If we can do this in advance like (we did this year), I don’t see why not.

“I do miss the face-to-face aspect. But there’s definitely some high tech things we can include.”

The program did reduce the number of elected positions to account for the lack of time to campaign. Statesmen elected mayors for each of the 18 cities, while statewide elections were held for governor, lieutenant governor, attorney general, commissioner of land office, comptroller of public accounts, commissioner of agriculture, and three railroad commissioner positions.