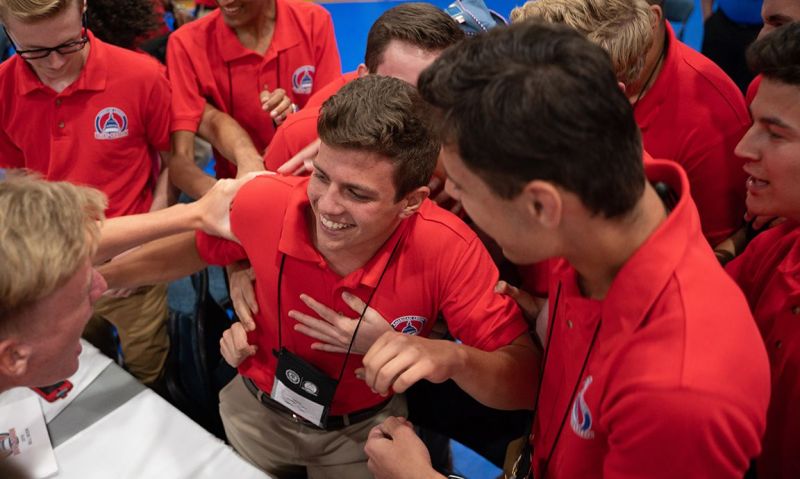 The award-winning documentary “Boys State” follows four young men during a week at Texas Boys State in 2018, the year after their predecessors voted to secede from the U.S. That event prompted filmmakers Amanda McBaine and Jesse Moss to make the film, which follows Ben Feinstein, Steven Garza, Robert McDougal and Rene Otero through the program.

Here are 10 things to know about The American Legion’s Boys State program:

1. The first Boys State program was founded in 1935 in Illinois by Legionnaires Hayes Kennedy and Harold Card, in an effort to counter the socialism-inspired Young Pioneer Camps.

3. At Boys State, participants learn government from the township to state level. The training is objective and centers on the structure of city, county and state governments. Operated by students elected to various offices, Boys State activities include legislative sessions, court proceedings, law-enforcement presentations, assemblies, bands, choruses and recreational programs.

4. While Boys State programs reflect the two-party system, they don’t use “Democrat” and “Republican” designations — many programs divide parties into “Federalists” and “Nationalists.” And it’s up to the participants to decide their party platforms.

5. While the recommended guidelines for Boys State programs suggest that only males who have completed their junior year of high school and have at least one semester of high school remaining should be considered for the program, that doesn’t have to be the case. In a memo to American Legion departments, Americanism Commission Chairman Richard Anderson noted that Public Law 112-66, passed in 2011, amended the Legion’s federal charter so that “American Legion departments possess the authority to establish their own criteria for Boys State program eligibility, selection, participation and operation and should proceed with their respective programs accordingly.”

7. There is no cost to attend Boys State, as expenses are covered by sponsoring American Legion posts, local businesses or other community organizations.

8. With few exceptions, the staff at every Boys State program are unpaid volunteers, giving a week (or more) of their summer to help educate and support Boys Staters.