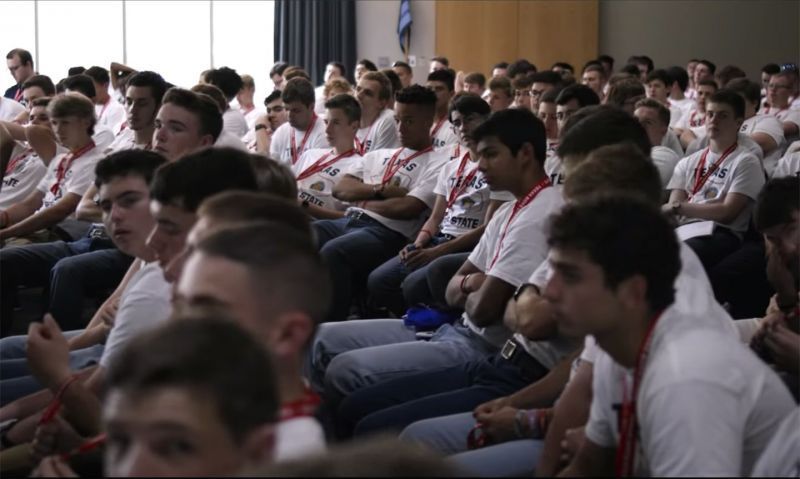 Rene Otero, one of the four young men featured in the award-winning documentary “Boys State,” almost didn’t make it into the movie.

Filmmakers Amanda McBaine and Jesse Moss already had three “statesmen” — Ben Feinstein, Robert MacDougall and Steven Garza — tabbed for coverage during the 2018 session of Texas Boys State after preliminary interviews before the session. Otero drew their attention with his campaign speech to become chair of his party after the session at the University of Texas was underway.

“I wasn’t even certain I was going to run (for the chair), I was actively writing my speech in the seats, asking people around me, ‘Hey, if I run will you vote for me?’” Otero recalled. “I finally decided I was going to go up there and give that speech, and it was right after that speech, right after that assembly, they directly approached me and introduced themselves and complimented me on that speech and they said, ‘We want you in the documentary.’ I said, yeah … it’s a huge confidence boost for me to give a speech and then two filmmakers come up to me and say we’re going to change our whole project to include you. It felt like I was flying on cloud nine at that opportunity, I had to take it.”

“Boys State,” which won the Grand Jury Prize at January’s Sundance Film Festival, premiered on Apple TV+ on Aug. 14 after appearances at several virtual film festivals over the last few months. McBaine and Moss pitched the idea of a documentary to Texas Boys State leadership in late 2017, spurred on by the vote by the 2017 Texas Boys State legislature to secede from the Union.

Feinstein initially considered a run for governor as part of the Federalist Party but opted instead to take a run at party chair.

“The saying is, ‘It’s your Boys State. Figure it out.’ And it really was,” Feinstein said. “I got put in as Federalist Party state chair, and I went from a nobody to leading 500 people in an organizational structure I wasn’t familiar with at all, doing a process I’d never done before, in a matter of one speech in a few minutes and one vote. And leading that organization, and Rene can attest to this too, anyone leading that organization, you have to pick up a lot of leadership skills really, really quickly to just hold it together. And to actually be able to win with that organization and turn it from something disorganized into something coherent and like powerful, is a really impactful feeling.”

Feinstein said the film has given him a chance to reflect on some of the mudslinging that took place during the gubernatorial campaign.

While “a snapshot of all those (good) memories would be awesome,” the mudslinging “didn’t have to play out that way,” Feinstein said.

“Politics doesn’t have to be dirty, politics at the end of the day is an organizational, informational structure. And we made it the way it was. I think looking back, the opportunity to see my own decisions in the mirror and see the people they were impacting as people and not just opponents and not just the obstacle to victory was I think really valuable. It’s made me rethink a lot of my political beliefs,” he said.

And the cast believes the documentary can help reshape the political landscape if their peers take a look.

“For all the awful problems that are going on across this country … it truly is an amazing place to be able to come together to freely express our views and to freely make a government by the people,” Garza said.

“The program as a whole is such a positive experience, and it’s such a testament to how democracy should be,” Feinstein said. “There’s a lot outside the political system that brings us together, and I think that’s how it should be in the real world as well.”

For Otero, the Boys State program is a litmus test.

“Now you’re more inclined to understand or empathize with the electoral process because you went through it. We kind of live in an age where we have discouraged voters, so ‘Boys State’ might be what’s necessary to invigorate people again,” Otero said.