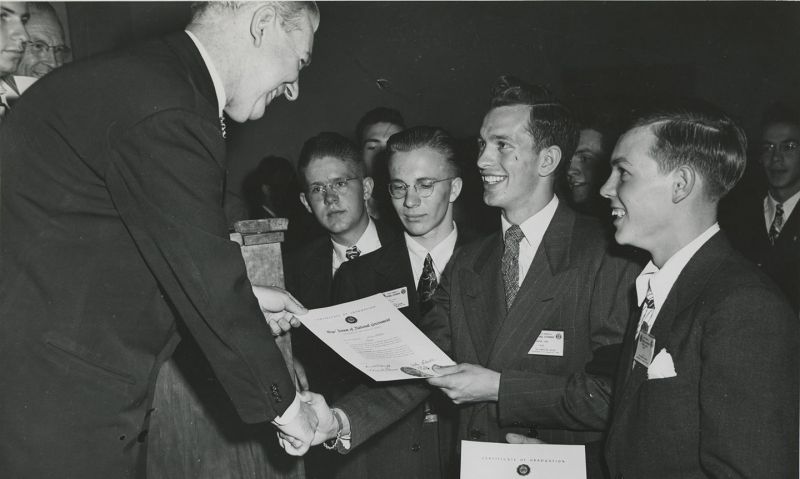 Graduation ceremony at the Boys Forum held in Washington, DC on August 4-9, 1946.

In an article published in the June 1948 edition of The American Legion Magazine, Dan Mathes Jr. of Arkansas shared his experiences at Boys State and the national program then known as the Boys Forum of National Government.

Mathes closed his story with his hope “that more boys will be able to attend Boys’ State and the National Boys’ Forum, because I feel certain they will all be eager to make good use of the invaluable experience they receive through the educational program of The American Legion.”

On July 23, high school juniors from across the nation will arrive at Marymount University in Arlington, Va., for the 75th session of American Legion Boys Nation — a milestone delayed a year after the program was canceled in 2020 due to the COVID-19 pandemic.

Over the next several weeks, we’ll delve into Boys Nation’s history, sharing highlights and memories of the program from some of the 7,000-plus men who spent “a week that shapes a lifetime” in the Legion’s premier educational program.

An article in the August 1935 issue of The National Legionnaire newspaper leads off so: “An Americanism movement which seems destined to become nationwide under American Legion auspices was initiated successfully by the Illinois Department in late June.”

That was Illinois Boys State, the brainchild Legionnaires Hayes Kennedy and Harold Card, who saw the growing popularity of socialism-inspired Young Pioneer Camps as a threat to America’s system of government.

While young men could learn how government was conducted in school, the Boys State program would give them an opportunity to put their education into practice, through elections, a justice system, and other representations of their state.

The program’s success in Illinois quickly prompted other states to follow suit. In an article in the May 1939 issue of the Legion magazine, Kennedy wrote that “twenty States of the forty-eight will sponsor schools of instruction this summer with four more seriously considering such a step.”

Kennedy included a comment from an Illinois Boys Stater, Lester Gootnick, who told the state’s General Assembly, “For the first time in my life I saw my generation in action; not the regimented mass movements of European youth, but clean, free and individualistic activity. To see 1400 boys working in harmony, willing, gladly, would impress even the most blasé observer.”

World War II prompted the cancellation of many Boys States programs, with some meeting without national authorization due to wartime travel restrictions. But the programs returned in 1946, and with them came plans for a national forum.

Ninety-eight delegates from across the continental U.S. arrived in Washington, D.C., for the inaugural Boys Forum of National Government, Aug. 5-9, 1946.

Many of the traditions that still exist at Boys Nation were part of the first session. From the Aug. 20, 1946, edition of The National Legionnaire:

“Washington greeted the boys royally. They were received by the War and Navy Departments. They were honored with a military review. They visited national shrines and placed a wreath on the Tomb of the Unknown Soldier under eyes of the Arlington military guard and the National Guard of Honor of The American Legion.

“They dined at and toured the U. S. Naval Academy at Annapolis. They looked in on the FBI.  They heard addresses by an associate justice of the supreme court, senators and a governor. They visited cabinet members and bureau chiefs. They participated in eight radio broadcasts and were interviewed by the press. At each day's end none of the boys had lost their ginger; the same could not be said for the Legionnaires who shepherded the boys over the busy course August 5-9 and attempted to keep pace with them.”

At the end of the week, the delegates met with President Harry Truman at the White House. Truman told them, “The welfare of the United States in the next 20 or 30 years is going to be in your hands.”

Truman would meet with the delegates again in ensuing years, setting a precedent for other presidents to follow — a precedent that would lead to a historic photo in 1963 of President John F. Kennedy and future President Bill Clinton.

After the 1946 delegates opted not to elect one of their own as president — as reported in The National Legionnaire, “to the tunes of a Navy band, they nominated a fictitious character named John Doe for president and gave him a demonstration which made the hall tremble” — the 1947 Boys Forum delegates elected Edmond Gong of Miami, Fla., as the program’s first president.

A name change was on the way.