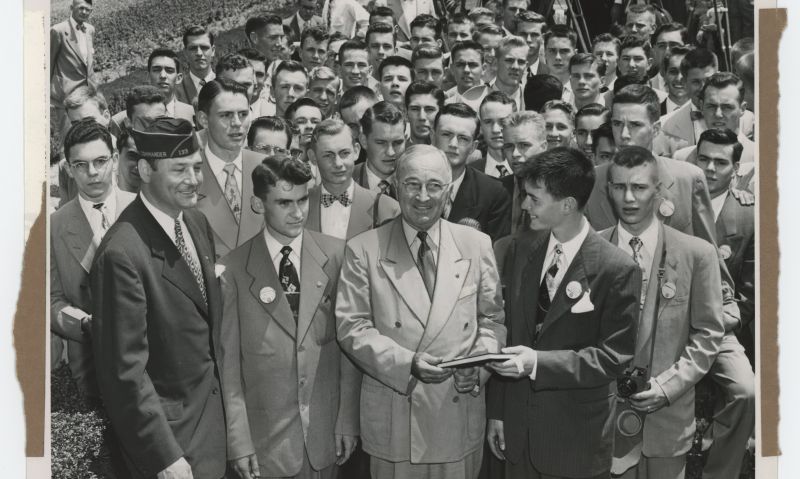 As the 1950s dawned, the Boys Forum of National Government took on a new name: American Legion Boys Nation.

And just as the United States grew, adding Alaska and Hawaii as the 49th and 50th states, Boys Nation also grew over the course of the decade.

An account of the 1950 session of Boys Nation, in the September 1950 issue of The American Legion Magazine, noted that the “climactic event of the week chocked full with thrills was a visit to the White House, where the boys were received by Legionnaire President Harry S. Truman with a warm hand shake and an address. The boys were permitted to take pictures of the President.”

Vice President Alben Barkley addressed the Boys Nation delegates at their graduation ceremony in the Senate Office Building. “The award of certificates, lapel pins and gifts of appreciation concluded the fifth annual event with comment from the 86 young men that their week's participation in Federal Government was the greatest week in their lives.”

The 1954 sessions of Boys Nation and American Legion Auxiliary Girls Nation marked the first time the programs’ respective presidents both came from the same state. Edward Perry of Bay St. Louis, Miss., and Jerolyn Ross of Meridian, Miss., were guests at The American Legion’s 36th National Convention, in Washington, D.C.

In 1955, the 10th session of Boys Nation brought 94 delegates to Washington from 46 states and, for the first time, the Department of Panama. The delegates also presented President Dwight Eisenhower with a gift, as noted in the September 1955 issue of The American Legion Magazine: a rototiller for his farm in Gettysburg, Pa.

The following year, an editorial in The Washington Star, part of which was reprinted in the September 1956 issue of The American Legion Magazine, praised the Legion and the Boys Nation delegates:

“Representing 47 States and the Panama Canal Zone, they have come here to learn all that they can about the duties and responsibilities of citizenship. They have been selected to do this from among 20,000 youngsters who participated some weeks ago in the Legion’s similar state-wide programs. They have already established themselves as popular and outstanding students in their schools back home. And one of these days when they are mature men, more than a few of them may return to this capitol city to play, in real life, the executive, judicial or legislative roles that they are simulating now for educational purposes.

“In any event these young men, averaging 17 years of age, have the stuff that makes for good citizenship and good public service. Certainly, with their mixture of youthful bounce and serious mindedness, they are refreshing and reassuring to contemplate at a time when juvenile delinquency is in the news to a depressing and perhaps even alarming degree. The American Legion deserves commendation for its annual effort — through the Boys Nation program — to bring out and encourage such youngsters. The project is helpful to the country as a whole and both its directors and participants have reason to be proud of it.”

Next: A notable moment between two U.S. presidents.