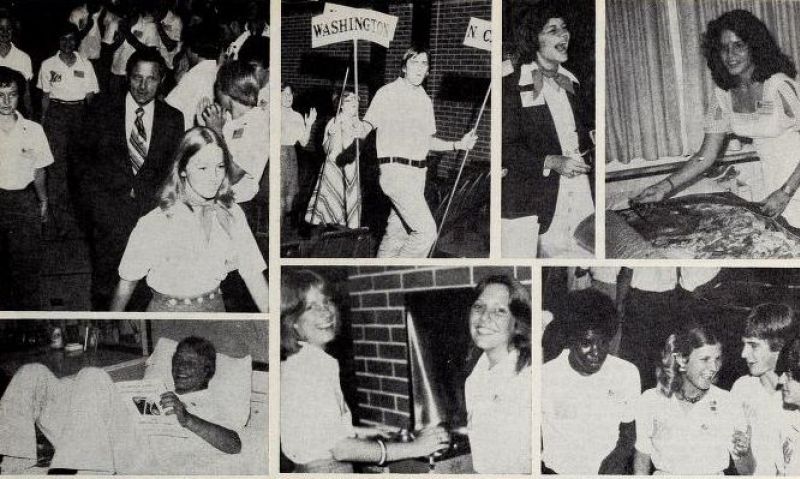 American Legion Boys Nation has come to be known as “a week that shapes a lifetime.” In the summer of 1976, it became three weeks that shaped a lifetime.

In recognition of the country’s bicentennial, the Legion’s Spirit of ’76 Committee suggested combining Boys Nation and American Legion Auxiliary Girls Nation for the 1976 session. The combined session — the 31st session of Boys Nation and the 30th of Girls Nation — would last 18 days and brought 297 boys and girls from across the country to Washington, D.C.

One of those delegates was Greg James, the governor of Oklahoma Boys State that summer who would go on to serve on the Department of Oklahoma Executive Committee.

Among the memorable moments for James from that 1976 session was having lunch with Oklahoma’s Congressional delegation, including Speaker of the House Carl Albert, a longtime friend of James’ mother’s family.

“I sat between the Speaker and Sen. Henry Bellmon,” James recalled. “Over a very relaxed lunch, the two of them worked out the framework of a compromise on a sticky issue that divided both parties and the two houses. All the while carrying on a conversation with our six (Boys Nation and Girls Nation) delegates like we were having lunch at one of their houses.

“… By their examples over lunch, we learned that the legislative process did not have to be as ugly as it was often portrayed then and that simple civil discourse could keep America moving forward.”

Five of the Boys Nation presidents who served in the 1970s spoke at The American Legion’s National Convention the year they served.

John Glunt, the 1971 Boys Nation president, noted the troubling and yet amazing times in which they were living when he addressed the national convention in Houston.

“Like it or not, the problems that this country faces are ours to solve,” Glunt said. “They are ours, not my generation’s or yours, but ours, the American people’s.

“Is the idea of a combined effort of our generations less than realistic? My generation has a great ability to see and name what we feel to be injustices, and to take a stand. We tend to be impatient. When we are voted down or our ideas are not accepted, we refuse to accept the idea that we could be wrong, and too often we turn to violence and civil disobedience. The great hope for youth lies in our ability to take a stand which is vital to the principle of personal freedom. With the addition of experience, the differing factor in our generation’s abilities, we will be a part of the realization of the American dream.”

A year later, 1972 Boys Nation President Gregory Hack of Lawrence, Kan., pointed out that “the greatest part of our American tradition is the manner in which we have always seized opportunities in times of crisis.”

“And so it must be today. We must seize every opportunity. We have today a better chance to end racial prejudice than ever before. Through common sense and understanding we are now closer than ever to the point where we can call all men our true brothers. The opportunity for even greater progress cannot be wasted,” Hack told the national convention in Chicago.

And as the 1970s drew to a close, 1978 Boys Nation President Michael Lopez, speaking to the national convention in New Orleans, noted the “responsibility to a changing world.”

“No matter how much the technology and policy of the future may differ from the present, the verities of truth, justice, and self-worth will always be upheld in a responsible society,” Lopez said. “The turbulent transition of time from the 1950s to the 1960s and the fragile recuperation of the 1970s have shown us that all Americans still hold the verities high as the signposts of the 1980s and 90s.”

Next: A new home and new technology.