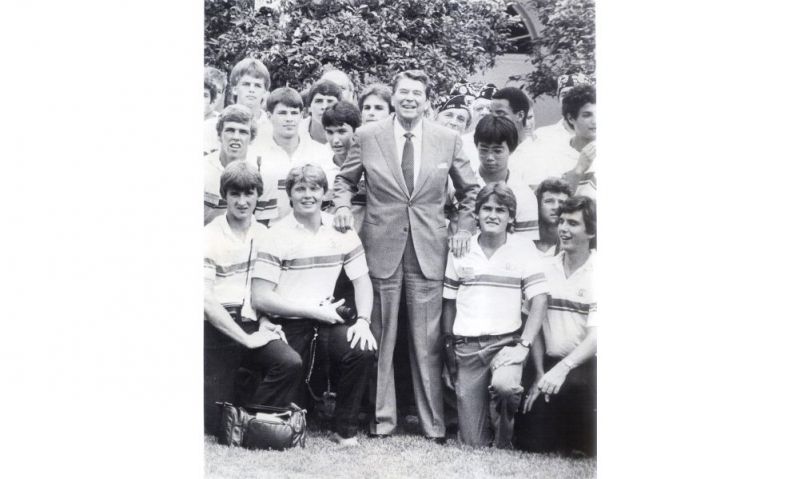 In his final address to American Legion Boys Nation as president, Ronald Reagan expressed his confidence in the country’s future with the Boys Nation delegates leading the way.

“It’s just so great to see and have you here, and to know what you all represent. And it makes somebody feel good who’s kind of coming to the end of the job, to see a lineup of the kind of people that will be taking over as these years go by. And I can assure you, I have a great faith from what I’ve seen in how our country is going to do in the years to come,” Reagan told those chosen for Boys Nation in the summer of 1988.

A Legionnaire himself, President Reagan’s speeches to Boys Nation during his two terms as president made lasting impacts.

“Meeting President Reagan in the Rose Garden was the memory of a lifetime!” Chris McGowan (Boys Nation 1984) shared in an email. “We were told all week long, ‘We might get to meet the president. If we do, no questions, no handshakes, no autographs.’ If we heard that once, we heard it a hundred times.

“Well, President Reagan not only invited questions, but he also shook hands and he could not have been more gracious,” said McGowan, one of those called upon by President Reagan at their meeting in 1984.

The year before, 1983 Boys Nation President Donal Logue spoke at The American Legion’s National Convention before a speech by President Reagan.

“He said to me, ‘That was a really nice talk,’” Logue, who would go on to a prolific acting career, said in a 2014 interview with The American Legion. “Pretty momentous affair, just having a passing compliment from the president was amazing.”

Thousands of young men have been chosen to represent their states at Boys Nation over the decades, but in the summer of 1980, millions nationwide had the chance to watch part of the program on the fledging C-SPAN cable channel.

The program included Boys Nation’s meeting with President Jimmy Carter at the White House. Carter expressed his gratitude to The American Legion “for the wonderful work that has been done over the last number of decades … in helping to promote the interest of young men, at the present time in their lives, in the future of our nation.”

Members of the 1980 Boys Nation session also drew attention for their impromptu meeting with one of the recently freed hostages from the U.S. Embassy in Iran.

Richard I. Queen was entering the State Department building to address the families of other hostages in Iran when 55 members of Boys Nation, led by Legionnaire and Boys Nation administrative counselor “Casey” Cason, sang “America” to Queen. An account of the event in the September 1980 issue of The American Legion Magazine described Queen as “visibly moved” by the song.

Before the decade was out, Boys Nation would have a new home. The 1986 session was the first at Marymount University in Arlington, Va. — Boys Nation has been set there ever since.