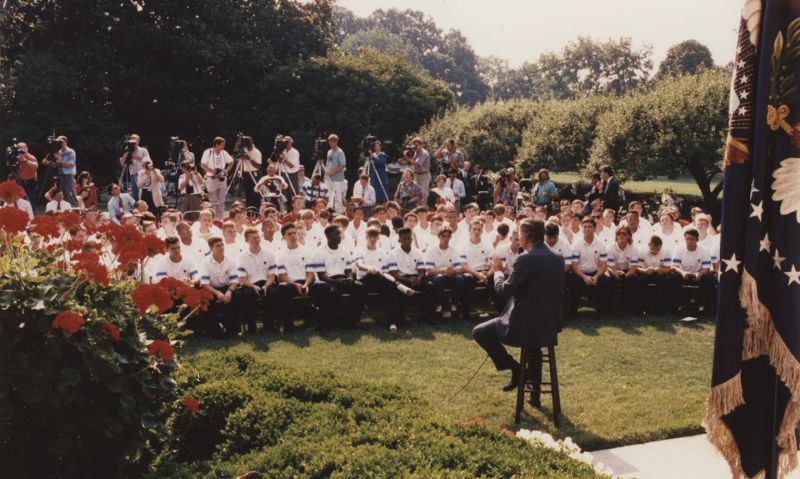 One of the most vivid memories of the summer of 1991 for Gavin Gamber was his trip to the White House as part of American Legion Boys Nation.

“I remember saying to myself then, ‘I’m going to work here one day,’” Gamber shared in an email, recalling the tour of the White House and watching President George H.W. Bush leave via Marine One from the south lawn.

“Flashforward 13 years and I was standing in the White House working for President George W. Bush,” Gamber continued. “I had the honor to work for the President in the Office of Presidential Advance where I travelled all over the U.S. and the world on over 125-plus Presidential trips.  It was one of the most incredible experiences of my life.”

During his campaign, Clinton spoke at the 1992 American Legion National Convention in Chicago.

“It is literally true that I might not be here today if it weren’t for The American Legion,” Clinton said, referring to his Boys Nation and Arkansas Boys State experience. “That summer I learned from The American Legion that being a citizen involved responsibilities as well as rights, including the responsibility to love your country, even enough to right its wrongs. The responsibility to get involved, to make a difference, to serve. I’m not the only American whose life has been made better by your continuing service here at home. From baseball to the Boy Scouts. From keeping the veterans hospital open to keeping kids off drugs. From addressing homelessness to preventing child abuse. To instilling the deep sense of patriotism into still another generation of Americans. Our nation owes you a debt of gratitude.”

While not every Boys Nation delegate has gone on to work in politics, the experience has certainly shaped their lives.

For 1999 Boys Nation President Ryan Rippel, the experience helped him find his voice.

“It’s extraordinary to meet the president, whatever your political ideology or affiliation, this is the leader of the free world,” Rippel said in a 2019 interview with The American Legion, recalling his meeting with President Clinton. “And it is an overwhelming experience, and especially for a young person who aspires to be in public service, is committed to government service and admires it, to then be in the company of the president of the United States, and to actually have a president paying attention and talking to you, it is indescribable.

“… I work on issues of poverty and economic mobility today, and I know what’s happening in the half-mile radius around someone’s home has a lot to do with the kinds of opportunities that can exist later in life. And that is true of our systems of governance too, that we have to invest in those local ones, we have to find our voice and a role for ourselves in building those communities where we live. And whether that takes the form of government service or politics or military service or whatever it is, it does begin with you finding your own voice, and these weeks in the summer are ways to do that and to shape that and to build some extraordinary relationships that will stay with you over the course of a lifetime, which is hard to beat.”

While the world braced for a new century, Boys Nation commemorated a half-century of shaping young men’s lives. In 1995, rising high school juniors from across the country met in Washington, D.C., for the 50th time. Speaking at the American Legion National Convention in Indianapolis that fall, 1995 Boys Nation President Rick Lam Jr. noted that the main theme he learned from his week in the program was the importance of having faith—in the American system, in America’s leaders, and in fellow Americans.

“Through the programs that The American Legion sponsors, such as Boys Nation, I believe that our future is in great hands. Boys Nation develops capable youth with character and courage. Andrew Jackson once said: ‘One man with courage makes a majority.’ And that’s exactly the kind of courage that our founding fathers of our country had.

“With the continued support of the programs like Boys Nation, we will continue to build our country’s leaders.”

And as the second half of the 1990s began — and with it, the second 50 years of Boys Nation — any concerns about the cliché Generation X slacker were being put to rest by those selected to represent their states at the program.

In the Aug. 8, 1996, issue of The American Legion Dispatch, National Americanism Commission Chairman Joseph Caouette Jr. said, “We’ve had all those (Generation X) kids come through here. You’ll not convince me that they were any less driven than the ones who came through here 30, 40 or even 50 years ago.

“If anything, the guys this year may seem a little more motivated than in some past years. I’ve listened to them really take some speakers to task, asking difficult questions even the experts had a tough time answering.”

Next: Into the 21st Century.