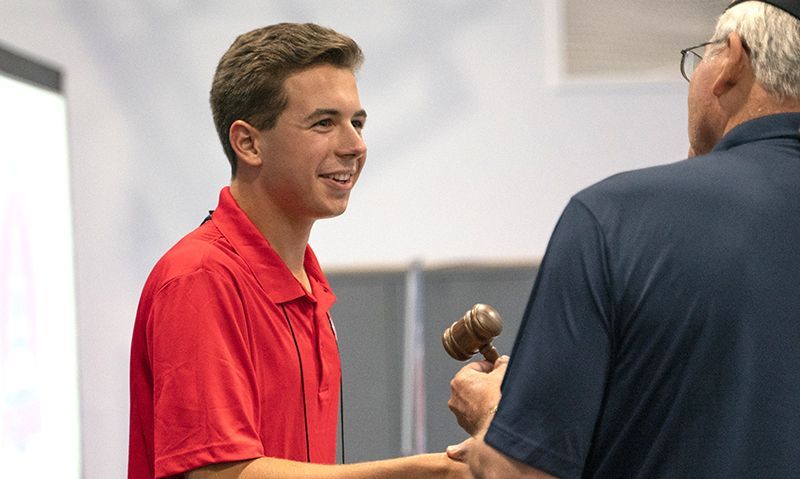 As he spoke to his fellow American Legion Boys Nation senators Saturday night, candidate for president pro tempore Eddy Gonet encouraged first one party, then the other, to cheer.

Then he urged them to cheer together.

Gonet’s message got through, as he was elected president pro tempore for the 75th session of Boys Nation. Second in the voting on the first ballot of 11 candidates, Gonet edged Quentin Messer of Louisiana on the sixth ballot.

Messer had the fifth-highest vote total after the first ballot but momentum carried him into the final ballot against Gonet. Messer jumped from 24 votes on the fourth ballot to 43 on the next.

“If there’s one thing I stand by, it’s not over until it’s over,” said Gonet, an attitude he kept even as his supporters assured him he would win. “The whole process is nerve wracking. … He was a really great candidate.”

Gonet acknowledged he had to do some research about Illinois before arriving at Boys Nation.

Following Gonet’s election, he oversaw the election of the secretary of the senate. Andrew Iskandar of Delaware won on the sixth ballot, edging John Costello of South Dakota by a 49-48 vote with one abstention.

In his candidate’s speech, Iskandar acknowledged that there were better speakers but said, “I believe that I can make our 2021 Boys Nation a record (one).”

Saturday night’s election results give the Nationalist Party and the Adams Section two of the four elected positions at Boys Nation. Senators will elect the president and vice president on Tuesday.

The 100 senators arrived in Washington, D.C., from across the nation throughout the day Friday. Those who flew were greeted at Ronald Reagan Washington National Airport while others from nearby states were driven directly to Marymount University by their parents. After checking in, receiving Boys Nation polos and room keys and getting their photos taken, the senators unpacked and started mingling.

Saturday morning began with the daily flag raising followed by the senators taking the oath of office and officially beginning the business of Boys Nation.