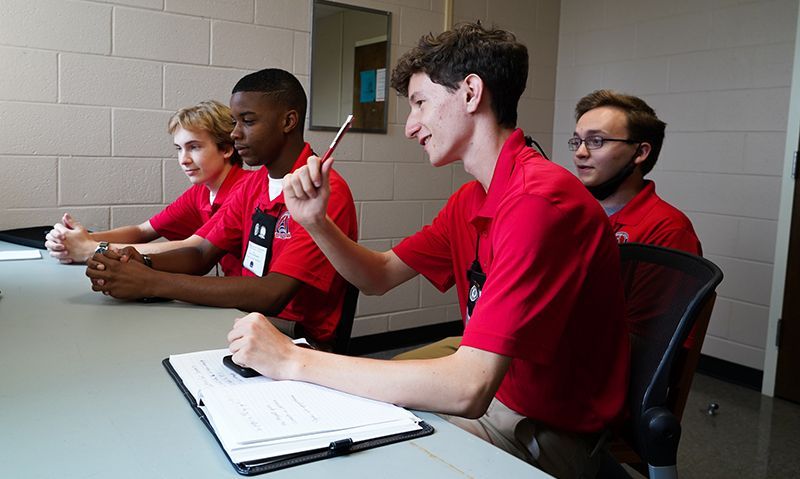 2021 Boys Nation Senators participate in virtual hill day in which they get to interact through video chat with their congressional leaders or staffers.

In this era of Zoom meetings and remote work, the senators of American Legion Boys Nation took the virtual aspect of this year’s Hill Day in stride.

“It would have been cool to meet him in person and get a picture, also part of that would be seeing his office and seeing the Capitol building. But I think overall it was really close to the same experience. It went better than I expected; we were able to talk to him really naturally and ask all our questions. I think it went really good,” McConnell Bristol of Colorado said of the meeting Thursday with Sen. John Hickenlooper.

Under normal circumstances, the senators of Boys Nation would have met with their counterparts from American Legion Auxiliary Girls Nation on the programs’ penultimate day on Capitol Hill for meeting with their U.S. senators and/or their staff. But with pandemic restrictions still in place at the Capitol, the 75th session of Boys Nation had to make those visits virtual.

“I think anyone would rather meet their senator in person, but it was still really cool to meet him at all,” Bristol’s colleague from Colorado, Rhys Gerboth, said of the meeting with Hickenlooper. “Probably the highlight of the week for me.”

“We really just talked about our bills, what we were proposing as far as legislation, and we asked his chief of staff how did he meet the new senator,” Pace said.

“I introduced a bill allotting $500 million to Department of Energy for energy storage, better batteries and hydroelectric power, because the United States has 90,000 dams and only 2,500 of them are even using hydroelectric energy,” said Sullivan, whose bill passed the Boys Nation senate 53-38 and is awaiting Boys Nation President Ryan Jung’s signature. “… We’re just letting energy go to waste.”

The Georgia senators said Libell told them any time they were back in Washington, D.C., he would be happy to make an in-person meeting with Sen. Warnock happen.