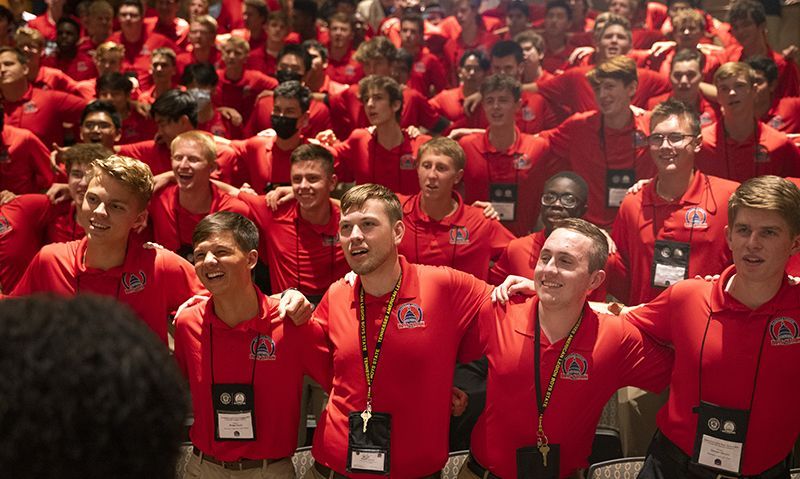 Senators sing “Lean on Me” during the graduation ceremony on day eight of American Legion Boys Nation on Jul 30, 2021.

As he spoke to his fellow American Legion Boys Nation senators during Friday night’s graduation ceremony, Boys Nation President Ryan Jung made reference to Abraham Lincoln’s 1858 speech in which he said, “A house divided against itself cannot stand.”

“Stand we must. Stand we have. Stand we shall,” Jung said, helping close out the 75th Boys Nation session.

“We’ve elected a president and vice president from opposing parties in a show of true bipartisanship, and I would even venture to say that this will be the Boys Nation session that our future senators will look at and say, ‘If only it could be like this,’” Jung said. Jung, the Nationalist senator from California, and Cameron Cummings, an Alabama Boys State alumnus selected to represent Michigan as a Federalist, were elected president and vice president on Tuesday.

On Friday night, they received $2,000 scholarships from The American Legion for their service.

Also receiving special recognition at the graduation ceremony was the color guard:

Cummings, Gonet, Williamson, McIver, and 26 other senators at this year’s Boys Nation represented states other than their own. Because of pandemic restrictions, 15 Boys State programs canceled or delayed their sessions this summer so 30 senators from other states were randomly selected to represent those programs.