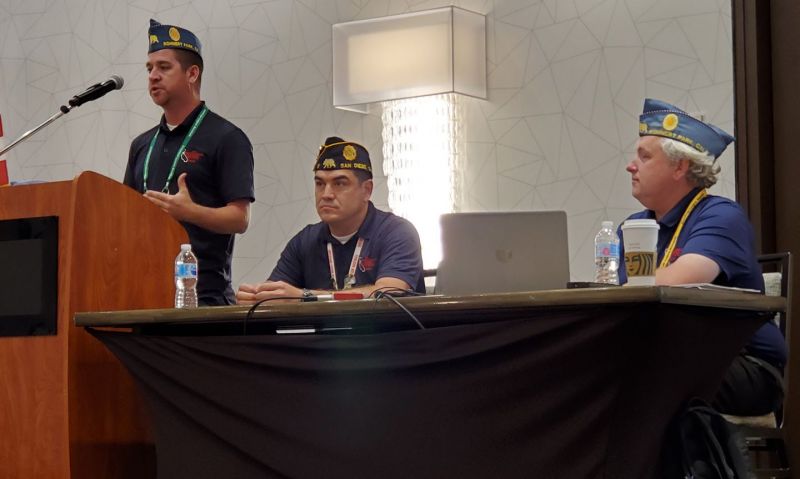 Nate Rice from the California Boys State staff talks about the program's pivot to virtual for the 2021 session during the Boys State Directors Conference in Indianapolis, Ind., on Sept. 25, 2021. Photo by Andy Proffet

Almost half of American Legion Boys State programs across the country were able to meet in person this summer, after the COVID-19 pandemic forced the cancellation of all in-person sessions in 2020.

Staff from many of those programs were in Indianapolis the weekend of Sept. 24-26 for the Boys State Directors’ Conference, the first since the fall of 2019. And while the slate of programs presenting to the conference included those who met virtually this summer and those who met in person, a common theme was how to use the technological changes brought about by the pandemic to improve Boys State programs while staying true to the intent of the program.

Even before it became evident that a virtual program would be necessary in 2021, the California Boys State program had created a task force to determine how such a program could come together.

Nate Rice, a California Boys State county counselor and member of the program’s virtual task force, said the goal was to make the virtual program as close to the in-person program as possible.

Still, the benefits of an electronic-based program have California Boys State staff looking at how to fold those into the program when it does return to in-person.

“The closer we can bring our programs to replicating what they see in the real world, the better prepared they’re going to be,” Rice said.

Arkansas Boys State staff praised the app for its ability to target content and tailor the schedule to individual participants. “(That) made it easy for our delegates and staff members to know where they needed to be at any time,” said Tom Hamaker, Arkansas Boys State’s office manager.

Arkansas plans to also use the app in the future to allow for guest speakers from all over the country, even when the program returns to in-person.

Missouri Boys State was one of the programs that met in person in 2021, but still used virtual tools for participant orientation.

“Virtual orientation is something that came out of our covid change in preparation for having an in-person session. One of the things we wanted to eliminate was the travel around the state, not just for the citizens and their parents, but the volunteers as well,” said Jerod Breit, dean of operations at Missouri Boys State. “This happens to be something that we’ve never done before that we will always do from now on.”

Breit said the virtual orientations helped put participants and their parents at ease while identifying potential no-shows, and helped spur candid conversations on expectations for those participating in the program.

“Ultimately, scheduling these virtual orientations across the entire week at different times … we were really able to capture everyone. That’s just something you can’t do when you’re doing in-person with an all-volunteer staff,” Breit said.

The staff of Louisiana Boys State took the opportunity to evaluate their schedule with the cancellation of the 2020 program and a virtual session in 2021. That included an analysis of the program schedule.

“For us, what we recognized was some of the things we were doing didn’t align with what we felt like we needed to go do,” said Micah Scott, staff member for operations at Louisiana Boys State.

For Louisiana, that time analysis led to reducing the time Boys State citizens spend in assemblies and party conventions and increasing the opportunities for them to participate more often in the program’s legislature and court systems.

“Take a look at your schedule. Truly sit down and do a time analysis and decide whether your time is being spent in the place where you really want to spend it,” Scott said.

“We should not be concerned that students are going to be distracted by their phones if they bring them to a session; we should be creating sessions that are so engaging they don’t have time to do anything else but problem solve with their phones in that session. That should be our goal,” he said.

Even with those kinds of changes, it’s important to maintain the important traditions of the program, Scott added.

“With all this change we’re talking about, all this innovation, it is important to remember that we have to protect our identities as a program. What that really means is, try to identify the things that are really important about what you do that may not necessarily align with your mission; what cultural thing is part of your program that really makes you who you are?” he said.

Oklahoma Boys State employed similar plans as the program returned for an in-person session in 2021 after cancelling in 2020.

“When we think about what’s happened over the last couple of years, don’t look at it as all bad. Think of it in terms of the opportunity that it presents you,” said Oklahoma Boys State Director Corey Brooks. “Some of you won’t have had an in-person program for pretty much three years by the time the next session kicks off. That is a lot of time to change some habits that maybe you wish you didn’t have, to innovate, to take advantage of some of the new technologies that have come about because of what’s happening in the world.”

Brooks said purposeful planning can be a litmus test for what Boys State programs do.

It can also help programs stay true to the intent of those who founded Boys State in 1935.

“Boys State, at its heart, is an ideological program. We talk about adapting to what’s going on with the kids and trying to meet them where they are, and that’s very important,” Brooks said. “But I want you to think about foundationally when these programs were started, it was to promote an ideology. … When we say purposeful planning, when we say the intent of the program doesn’t change, that’s what I’m talking about.”