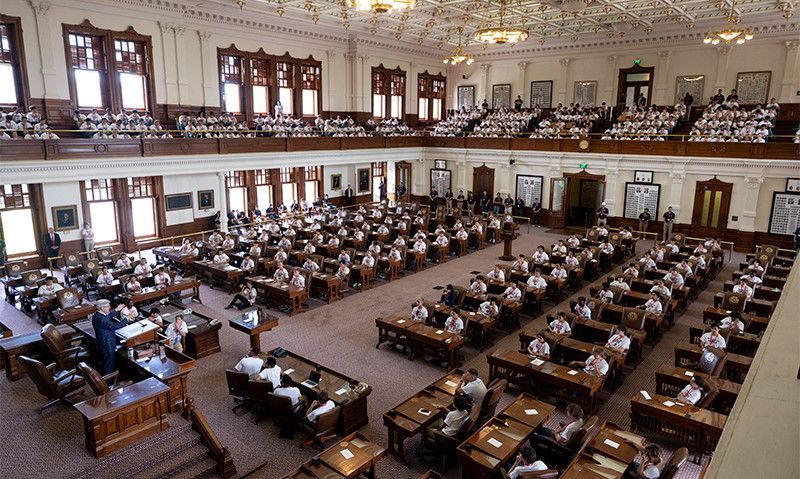 Participants in the Texas Boys State program at The Texas State Capitol in Austin, on Wednesday, June 15. Photo by Spencer Selvidge/The American Legion

American Legion Texas Boys State meeting in person for the first time since 2019 this June not only allowed statesmen and staff to interact face-to-face, it allowed dozens of guest speakers from across the Texas government to talk about their jobs in person with those attending the 2022 session.

“Visiting dignitaries at Texas Boys State are those that have possibly come through the program, but have definitely come through the system in the state of Texas, and continued to be those responsible citizens in Texas and get involved, whether it be at the township level or the state level. So it’s nice for those leaders in the great state to come back and mentor those who are going to be those great leaders in the state,” said program director Scott T. Armstrong.

State representatives, township officials, judges and others visited the University of Texas campus to talk about their duties and answer questions from Boys State attendees. The statesmen also heard from Lt. Governor Dan Patrick during their visit to the Texas State Capitol on June 15.

“I’m glad to see we’re back in person,” Watson told the statesmen. “… We need you to take (this experience) back to your hometowns. We need you to go back to the schools, tell all the other young men about your experience, what you learned here, what you’re going to bring out of here.”

Arista challenged the statesmen to talk to their sponsors when they returned home. “Share your experience. It makes The American Legion and the Legionnaires and the Sons of The American Legion proud that we have young gentlemen like you all to make it happen.”

Simmons-Copeland congratulated the statesmen for attending Boys State, and drew cheers when talking about her experience of walking around campus. “I’m ready for a nap,” she joked.

“Even with the documentary having come out a few years ago, I find myself still educating people about Texas Boys State and the Boys State program in general, so I think more and more people are becoming aware of it,” said Stephen Pennington, the Texas Boys State election administrator. “From that perspective, I think the future looks very, very bright. …

“We’ve taken a little bit of a haircut (in terms of participation), we’ve got some rebuilding to do as far as outreach and things like that, but I think the future’s bright.”

Ben Feinstein, one of the documentary’s stars, was back on staff for a third year this June.

“There’s no other program in the country where you’re getting somewhere between 800 and 1,000 young men at a critical point in their lives, right before they’re going to vote, join the armed forces, serve in public life in other ways and you teach them how to be leaders,” Feinstein said. “Walking into a room on Sunday or Monday, when they’re not sure what’s going on, and you’re having to shepherd and coach them through, versus walking into rooms (Tuesday, Wednesday) and especially, I anticipate, (Thursday), they know what they’re doing, they have a firm grasp on the situation, they have strong strategies they’re trying to implement; it’s really remarkable and especially being a city counselor, the feeling of seeing my guys move from not having their heads screwed on straight to being very efficient, very put together and running very professional meetings that, you know, adults wouldn’t often run, it makes me really proud, and it’s really a testament to what this program can do for young people.”

A sight to see. The proximity of the University of Texas campus to the Texas State Capitol — roughly a 15-minute walk — allows the program to march from campus rather than riding buses to the center of state government.

Led by the Texas Boys State band and escorted by police blocking traffic along San Jacinto Boulevard, the procession drew a variety of onlookers recording the march on cell phone cameras.