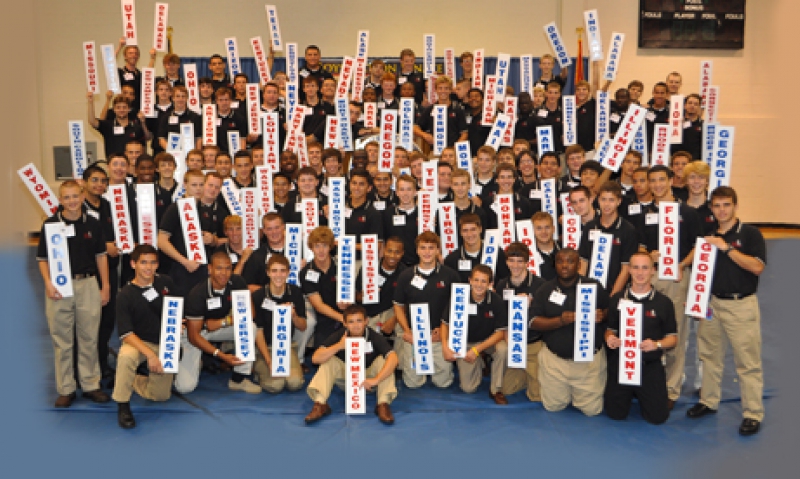 While Tuesday's activities for the senators were a little lighter than they have been in recent days, the events featured on the agenda were still instrumental to the success of 2010 Boys Nation.

In the morning, the senators climbed uphill a ways in order to reach the steps to the Supreme Court. The young men took in the massive, marble columns and ornamentation, as well as the spiral, five-story marble and bronze staircase. After viewing the Supreme Court's scenery, the senators ventured to the Court Chamber. The Court Chamber is outlined in 24 marble columns and features a mahogany raised bench that the justices sit behind, as well as sculpted marble panels depicting legal themes and famous lawgivers.

As the senators sat inside the Court Chamber, they were addressed by American Legion Past National Commander H.F. "Sparky" Gierke III, a former Chief Judge of the U.S. Court of Appeals for the Armed Forces, who then introduced keynote speaker Gen. William Suter, Clerk of the U. S Supreme Court. Suter provided an overview of the Court Chamber in terms of how a judge is appointed, who attends the court sessions, what cases the Supreme Court accepts and how many cases they hear a year, which is only about 80 out of the 8,000 they receive.

And while it wasn't miserably hot outside, the heat rose inside Marymount University's gym in the afternoon, when the debate got underway that pitted the Federalist candidates for president and vice president against the Nationalist candidates. In the running for president was Federalist Robert Fisher from Clarksville, Tenn., and Nationalist Charlie Brown from Avon Park, Fla. Running for vice president was Alex Geiger from North Little Rock, Ark., and Jimmy Ramirez from Oakley, Calif.

The intense debate allowed the Boys Nation senators a chance to hear each candidate's position on policies that affect America. The questions given to each party's president and vice president were submitted by the senators to the legislative party counselors prior to the debate. The legislative counselors asked the questions to the candidates, who then spent a few minutes announcing their views.

The presidential candidates smoothly answered all questions offered, which focused on topics such as education, border control, health care, foreign policy, and troop surge and withdrawal.

"I thought all four candidates did an excellent job today," said Tro Panosian of Scottsdale, Ariz. "Nationalist Charlie Brown is a man of great charisma; that's a gift and not a learned trait. And Federalist Robert Fisher knows his politics."

After the debate, the young men took a break for dinner in order to fuel up for the next round - the election of a Boys Nation president and vice president.

The elections first began with the Nationalist and Federalist parties presenting their party platforms to educate the senators on their beliefs and what they support. From there, the presidential candidates presented their campaign speech on what they will do for America if elected. Afterward, the two senators representing each of the 49 Boys States stood up together, holding their state sign, and cast their votes. As soon as all votes were cast, The American Legion 2010 Boys Nation president was announced: Charlie Brown.

"I'm grateful and honored that the senators put their faith in me and elected me," Brown said. "I would also like to say congratulations to my opponent; he ran an excellent campaign. I'm humbled and so happy, and now I'm ready to unite Boys Nation."

Likewise, officers within each party campaigned for the vice president before the candidates took the podium to speak their final words. When the candidates finished, the senators voted. Once all 98 senators casted their votes, Alex Geiger's high results elected him as The American Legion Boys Nation vice president.

"I'd like to thank my mom and grandmother for raising me to effectively be an upstanding young man" Geiger said. "I also want to thank my pastor and my uncle who is currently serving overseas in Iraq right now. This experience is very perspective opening and life changing. I'm so thankful to have this opportunity."