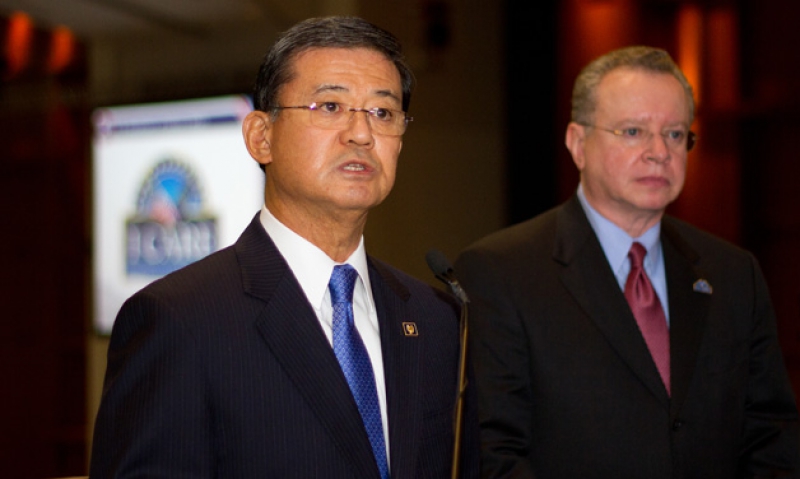 The Washington, D.C., Convention Center was swamped with veterans on Jan. 18 as thousands attended a Department of Veterans Affairs-sponsored hiring fair. Long lines formed throughout the day and evening, as job seekers waited their turn to talk with their choices among the 100-plus human resources managers represented. The American Legion was among several veterans service organizations offering advice and counsel to attendees.

VA Secretary Eric Shinseki conducted a brief press conference during the event, reminding reporters of veterans’ virtues in the workplace. “They make excellent employees,” he said, “because they come with the skills, the knowledge and the attributes that most organizations need and are looking for.” He then went on to tout the value of the VA-sponsored event. “Today, those organizations have banded together … to demonstrate how much they care by offering more than 6,000 jobs in both the public and the private sectors,” he said. “Many veterans will have the opportunity to walk out of this event with a job offer. Others will leave with a second interview lined up for that final hiring decision. All will have the opportunity to enroll in VA. They’ll have the opportunity to prepare résumés on site and will have the opportunity to undergo training in how to participate in a job interview. No one will leave without having taken these crucial first steps at finding a job.”

In fact, about 6,400 public and private jobs were available for offer to qualified applicants. While the majority was from the private sector, nearly every federal agency was represented as well, some advertising scores of open positions each. Many hiring managers advertised their strong desire to employ wounded veterans.

In that regard, among the more unusual job offerings were those from the U.S. House of Representatives and its little-known but quite successful Wounded Warrior Program (http://cao.house.gov/wwp-about.shtml). The program is headed, as it has been since its inception in June 2008, by American Legion member and former Legion D.C. office employee Patricia Orisini.

“It’s a two-year paid fellowship,” said Orisini, a retired Marine. “We’re placing disabled veterans in offices with congressional members to give them some job opportunities and experience. Plus, they get to network. It’s really like a launching pad to give them some exposure. Most of our positions are nationwide in district offices. We have probably hired about 72 veterans. Thirty-two or so have transitioned into full-time employment elsewhere. Several have stayed with the members (of Congress).

“As you can imagine, very few congressional staff these days have veterans on them, and to have one of our guys sitting at the front desk who is disabled (and) been through the whole process – well, they walk in and there’s a trust factor there. (The wounded warriors) probably have the best job in the congressional district office because they get out and interact with veterans. They probably get more return on their energies than a typical staffer who’s putting out fires with a campaign coming up.”

The American Legion hosted a booth at the fair, manned by Economic Division assistant directors Steve Gonzalez and Davy Leghorn. Gonzalez said that about 75 veterans stopped by to inquire about Legion services, with several requesting applications for membership.