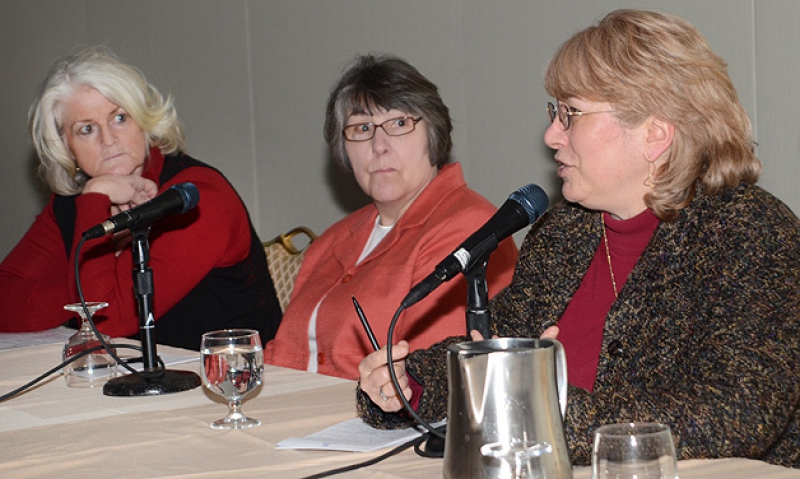 This year, the women veterans panel at The American Legion’s Washington Conference focused on rural health care for women veterans at Department of Veterans Affairs medical centers. The Legion’s concern about rural health care was also emphasized in its System Worth Saving site visits to several VA facilities last fall, and a recent three-day fact-finding trip to Arizona and New Mexico led by Past National Commander Ron Conley.

Mabry, a certified family nurse practitioner, said about 400 women veterans receive VA health care at the Stephens City CBOC. Although they have vans to bring people up and down the valley, “sometimes we don’t have services. We don’t have a gynecologist, believe it or not, at the nearby VA hospital, and we don’t have a dermatologist. So we have to send people into Washington or Baltimore.

“Some of these people have to get up at five in the morning to get on vans so they can get their health care, so it’s really a difficult thing for them. And I think, with time, we’ll see that we’re getting more female-oriented providers.”

Women veterans living in rural areas, according to Mabry, have higher rates of unemployment and mental-health issues than male veterans. “They have child-care issues, and they are often much poorer than the male vets coming out.”

Women veterans can also be more difficult to locate, Mabry said, “and that is our biggest challenge. How do we get to them? We have all these lovely things that we’ve put into place the last few years. But when you live out in the rural areas, in the mountains, and you don’t even know what’s going on, how do I find you? Because when you separate (from service), it’s not unusual that you quickly move and you may be living with families - you may be homeless.”

From her perspective as a certified registered nurse practitioner at the Cumberland CBOC, Gee said her biggest initial challenge for providing health care to women veterans was “learning the system. How do you get things done? I had to teach my patients to take care of some things themselves - ‘If you don’t get this appointment in a month, you call me.’ You learn, the longer you’re in the system, how to do what needs to be done to take care of your patients.”

For example, when Mabry sent one of her first women patients to the VA Medical Center in Martinsburg, W.Va., for urology work, the reply came back that “they didn’t take care of women. So we sent her to Baltimore. Other women patients have gone to Baltimore for mastectomies. They were often treated by residents, but there’s been a breakdown. I’m not sure what’s happening now but (the Baltimore VA Medical Center) called and said ‘We don’t do that. We don’t have a women’s breast clinic anymore. So you need to outsource those women.’ That’s sounds awful, but they don’t have to go to Baltimore anymore. We’re going to find something at home. So sometimes you can take a challenge and it turns into a real blessing.”

Gee said the Cumberland CBOC has become a well-organized, effective operation when it comes to treating women veterans; it even sponsors an annual Women’s Health Day. “(VA) rural health care came along and said ‘We’re going to help you organize women’s health.’ Well, we already did it. So we’ve been ahead of the game. I feel privileged to take care of women in my clinic, and I have a great group.”

Heady, who has been working in the rural health-care environment for 37 years, shared some 2008 statistics on male and female veterans enrolled in VA health care. Average male veterans are 55 to 64 years old, mostly white and live mainly in the South or Midwest; circulatory problems are their primary reason for treatment. Among Iraq/Afghanistan war veterans, 95 percent are male, and mental-health issues are their primary treatment concern.

“The picture is a little different for the female side,” Heady said. The average age of women veterans in the VA system is 45 to 54. “One of the biggest problems that we have is that we’re very limited on our research among our women veterans in terms of race, ethnicity and location. So I can’t even tell you today exactly how many rural women veterans are enrolled in the VA. But we do know that the top diagnosis (for them) is mental health. We do know that they are younger women and, of course, that presents all kinds of issues for a health-care delivery system that has served mostly older men.”

A big challenge confronting those who deliver VA health care to women veterans, Heady said, “is that women simply don’t know that they’re eligible for VA or VHA (Veterans Health Administration) benefits. The biggest barrier is within the population of women themselves. A woman makes an assumption that she’s not eligible - being a woman, not being in combat, or being out of the service for a while - so she won’t pursue it.”

Although VA has a national initiative to improve health care for women veterans, Heady said that access to gender-specific services is still limited; access to mental-health and primary-care services are also very limited in rural areas - not just for veterans but for everyone.

“In some areas, we still have places where those gender-specific services are not given much attention, and therefore the women just won’t go,” Heady said. “There are very limited mental-health and primary-care services for everyone in rural areas, not just for veterans. When we have a female veteran who has significant mental-health challenges, not being able to get care in her home community presents a real big problem.”

Obstetric and gynecological care is extremely limited in rural areas, Heady said. “That is also another issue that becomes a challenge for the woman veteran.”

About 40 percent of all veterans enrolled in VA health-care live in America’s rural areas, according to Chu, a program analyst at VA’s Office of Rural Health (ORH). “So we’ve funded a number of initiatives, including CBOCs, outpatient clinics and telehealth. We try to find innovative pilots that will have the broadest reach. Of course, we are very concerned about women veterans, since they are a growing population and particularly vulnerable with regard to getting access to specialty care.”

ORH has two initiatives in partnership with VA’s Women’s Strategic Health-Care Group; one is a group of mini-residency programs for women’s health care, and the other is a series of telehealth programs that can provide specialty care for women veterans.

Silva recalled the time in 1983 when she served on a VA advisory committee on women veterans; its mission was to ensure that women veterans had the same opportunities as men for VA health care. The committee soon recognized, Silva said, that many VA hospitals were not in the most desirable locations for many of their patients. Travel times could be quite long and expensive for many veterans living in rural areas.

“We visited many VA medical facilities and it became apparent that there was much work to be done,” Silva said. “Most women veterans had no idea they had as much right to the VA health-care system as the men did.”

Nearly 30 years later, Silva said VA has made many advances in the treatment of women, with many facilities equipped with specialized, up-to-date women’s clinics and wards. But plenty of improvements still need to be made. “We must assure that the minimum array of facilities are available at every center for women, such as cervical examinations, PAP smears, HPV, HIV services, mammography and all the other preventive services that males can access.”

Verna Jones, moderator and director of the Legion’s Veterans Affairs & Rehabilitation Division, summed up the discussion: “Health care has come a long way for women, but we have a long way to go. We appreciate all the good programs that you have, all the innovative things that you’re putting into place, but we’ve got to continue to push” VA to provide better-quality health care for women veterans.