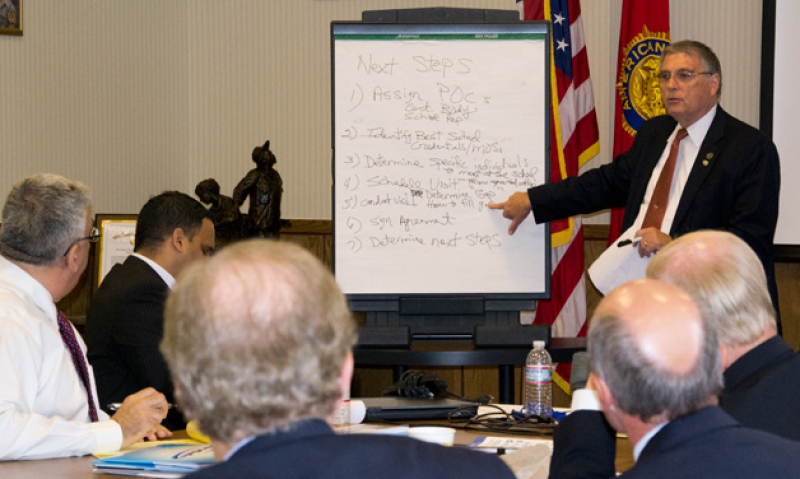 The ongoing campaign to boost veterans’ employment advanced this week with the latest in a series of Legion-hosted licensing and certification panel discussions. Representatives from the U.S. Army Training and Doctrine Command met with officials from several certification agencies at the Legion’s Washington, D.C., office to discuss how civilian certification and licensing preparation can be integrated into military specialty training. In this projected scenario, appropriate military training curricula would be modified or expanded to include education in the disciplines necessary to pursue the vocation or profession in civilian life. This supplementary training would be funded by the military service, if deemed important to its needs, or by the servicemember’s GI Bill educational benefits.

Meeting attendees, more than two dozen in all, agreed generally that civilian certification training should begin as early as possible in a servicemember’s military career. This is at odds with the traditional military view that providing training for a post-military career is tantamount to "issuing a ticket home," admitted Lisa Lutz, longtime collaborator in the Legion’s veterans employment effort,

"I think the services now see the value of credentialing in terms of recruiting, retention and transition (and) also in terms of ‘professionalization’ of the work force," said Lutz, president of SOLID, LLC, a Virginia-based research and consultancy firm specializing in veterans’ employment issues. As to retention of personnel by the services, Lutz explained, "If an individual is trying to obtain a certification that has experience requirements that are longer than one term of service, they might stay in (the service) in order to get the credential."

Lutz’s research identified 10, in her words, "high volume, high unemployment" Military Occupational Specialties that, when migrated into the civilian workplace, yield the highest rates of joblessness among veterans. They are:

Even though some of these military occupations would appear to be easily transferable, differences between military and civilian working conditions make the immediate transition difficult. "Drivers of military heavy transport vehicles are trained on automatic transmissions, but that doesn’t work well when they’re asked to drive an 18-wheeler with a manual transmission on an interstate highway," Lutz said. Therefore, said members of the Legion study panel, supplemental training in the military to meet eventual civilian licensing and certification requirements is needed to streamline the transition process and put the recently discharged veteran usefully into the civilian workforce quickly.

The five-and-a-half-hour session was hosted by the Legion’s Economic division and chaired by Roy Swift, director of the American National Standards Institute, the body that sets the standards for certification standards. Officials from the National Institute of Automotive Service Excellence, the Board of Safety Professionals, InfoComm International (audio/visual trades), the National Institute for Certification in Engineering Technologies and the National Restaurant Association represented their respective credentialing agencies at the meeting. The group is planning a series of site visits to military training installations this summer as a next step in facilitating the proposed training schemes. Legislation has also been introduced in Congress to encourage, though not mandate, the integration of civilian vocation training into military curricula.