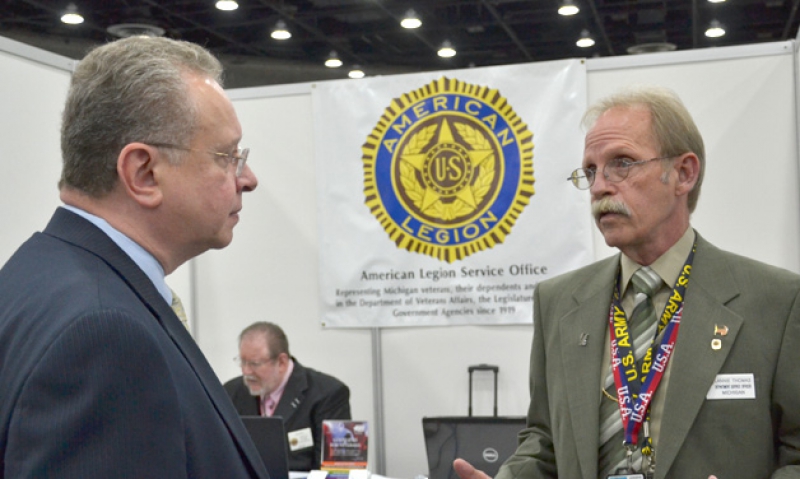 During the VA for Vets hiring and veteran-owned small business networking event in Detroit, it was evident that John Sepúlveda was a happy man. Sepúlveda is the Department of Veterans Affairs (VA) assistant secretary for Human Resources and Administration.

The VA for Vets event was Sepúlveda’s baby, even though he was joined by an estimated 600 VA employees. He was proud of how it turned out. "I think it’s been a great success," he said. "We’ve not only been getting veterans interviewed and getting (them) job offers, we’ve also been getting them information about the health care benefits that they’ve earned, the educational benefits that they’ve earned, and we’ve also been bringing people who are interested in small business opportunities together with people who offer those opportunities. There’s also been a tremendous amount of what I would call managed and coordinated networking (among veterans, businesses and employers)."

The Detroit VA for Vets was the second largest hiring fair and conference of its type staged by VA and, according to Sepúlveda, of much greater size and scope. "This is at a different level of magnitude. At our first (one) in Washington, D.C., last January, we saw about 4,000 veterans attend that one-day event. We ended up getting upward of 600 of those individuals job offers. This is going to be much, much bigger in terms of the number of veterans attending and the number of jobs that are going to be offered.

"Part of the story that’s not really being told, besides the number of individual veterans who come in and get coached, get interviews, get job offers… (is that) we’re also giving veterans a tremendous amount of information that they need to negotiate the job market, to negotiate the VA system, to negotiate the small business sector. They’re getting that here."

On Wednesday, VA Secretary Eric Shinseki gave the event’s keynote address to a luncheon crowd of thousands. Sepúlveda recalled Shinseki’s message points. "(Shinseki said) we hear you — the veteran-owned small business community and the service disabled small business community — and we’re working with you. We’re making reforms in the way we work with you to increase opportunities, not only to do business with VA, but to do business throughout government.

"The other thing (Shinseki) said was that we are very focused on helping veterans find jobs, particularly in this economy that still needs some help, and we’re making great progress. This hiring event is part of that strategy."

In his presentation, Shinseki also emphasized the need to increase responsibility and accountability among members of VA’s senior staff. Shinseki said, "To ensure that we deliver on our promises (to award appropriate contracts to veteran-owned businesses), I am holding all senior leaders responsible for the following: any contract not going to a veteran-owned small business must be reviewed by senior leaders and concurred in by a senior contracting executive. And when the federal supply schedule is used for contracting, senior leaders must again review decisions prior to any award to other than a veteran-owned small business. All senior executive performance evaluations will include a business performance metric.

"For the first time, VA has established small business procurement goals all the way down to the lowest senior executive level that exercises procurement responsibilities. We’re going to achieve our established goals by 30 September, 2012. We’re gonna do that. And when we do, we’re going to look again at raising our sights as we have since 2008. Procurement leaders at VA are accountable."

Shinseki then addressed concerns about the veteran-owned small business verification process by which such enterprises are vetted and determined to be eligible for the award of government contracts. The verification system had been criticized in the past for being vulnerable to fraud and abuse, though the General Accountability Office recently reported that VA has made progress in this regard. More recently, VA’s verification process has been the object of complaints by those who feel it is slow and unwieldy.

While Shinseki did not address continuing questions about its vulnerability to fraud, he did talk about streamlining the system. "Let me touch on verification and contracting compliance for a moment," Shinseki said. "I know this is an area of some tension. Now look, we’re not perfect here and we will be the first to say that. Not perfect — yet. But, we have implemented a new, comprehensive verification law on short notice. We went at it hard to get the standards right, fully prepared to adjust what we learned during implementation (and) we have found ways to shorten the verification process. The average verification time has gone from over 120 days to around 60, and we have simplified verification for previously verified companies that have not made any significant changes. Waiting periods are down to as little as seven days.

"Although much has been done, we have more to do. To reduce the number of firms who have been denied access because they’re not familiar with the process or confused by regulatory requirements, we have begun a Verification Education Program that has been rolled out at this conference."

The American Legion assisted VA in introducing the Verification Education Program at the VA for Vets event. American Legion Assistant Economic Director Davy Leghorn traveled to Detroit to join VA colleagues in counseling hundreds of veteran-owned small business operators and directing them toward the new verification tools mentioned by Shinseki. At the Verification Education Program booth was soon-to-retire Army Sgt. Maj. Anthony Clark, a new senior hire in the VA’s Center for Veteran Enterprise. Clark noted the dedication of the verification staff. "I’ll come in at 6:30 in the morning," he said, "and there will be people there working. I’ll leave at 10 at night, and there will still be people there. (We) really want to get this right."

Besides helping introduce the new Verification Education Program, veterans service organizations (VSOs) — such as The American Legion — were taking an active role in assisting veteran entrepreneurs in all aspects of government contract eligibility verification. The role of VSOs did not go unheeded in Shinseki’s keynote speech. In fact, he began his remarks by thanking the veterans’ advocates by name, with The American Legion first on his list.