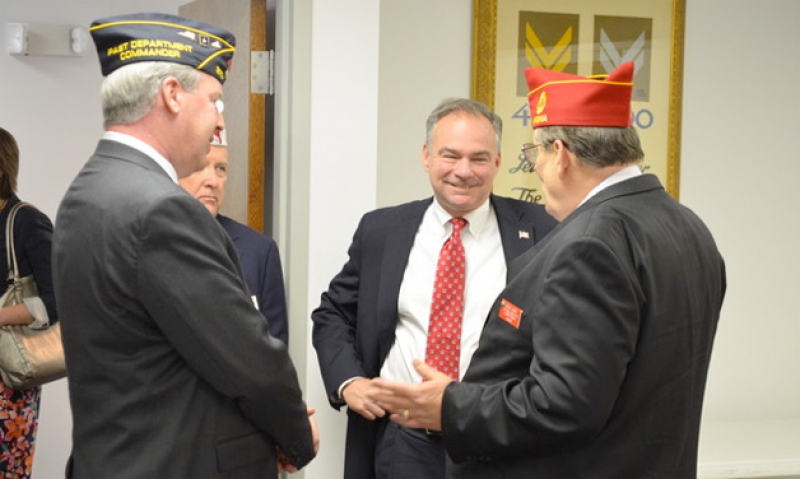 First-term U.S. Senator Tim Kaine of Virginia has announced his first piece of federal legislation — Troop Talent Act of 2013. The bill, backed by The American Legion, is designed to bolster efforts to streamline the military-to-civilian licensing and credentialing process. Kaine will formally introduce his bill after the Senate reconvenes on April 8.

The senator and members of the Legion’s Economic Commission had been working together on such legislation since Kaine was governor of Virginia. Appropriately, Kaine announced the contents of his veteran employment enhancement bill in anews conference on April 2 at The American Legion Department of Virginia headquarters in Richmond.

The Troop Talent Act of 2013 is crafted upon the premise that, as the bill’s summary states, "Servicemembers need enhanced information about credentials that correspond to their military specialty, and credentialing organizations need to better understand what training military service members receive."

Accordingly, one provision in the bill calls for active-duty military occupational specialty (MOS) trainees to be provided with information regarding any civilian licenses and credentials that their military schooling might apply to or qualify them, as well as how to fill any gaps between the two. Parallel with that provision is one that would enhance the ability of civilian credentialing organizations to access military training curricula, as appropriate, so they might tailor their requirements to encompass skills and knowledge acquired in military service.

The Troop Talent Act, if enacted, would direct the Secretary of Defense and Secretary of Veterans Affairs to consider allowing a servicemember to use GI Bill benefits to acquire one credential or license while still on active duty without diminishing their eventual veteran’s educational benefits. Congress would have to grant such permission.

The bill also addresses the difficulties experienced when a state, in which a servicemember or military spouse resides due to service, fails to recognize a license or credential originally issued to that person in another state. The Troop Talent Act proposes that incentives be offered to states to grant interstate recognition of some professional and trade credentials.

The American Legion National Commander James E. Koutz reacted enthusiastically to news of the bill’s introduction. "The Legion has been urging federal and state lawmakers, as well as industry policy makers, to streamline the military-to-civilian licensing and credentialing process for a decade and a half now," Koutz said. "Enactment of legislation like the Troop Talent act of 2013 will benefit not only the servicemember, but those who eventually employ him or her in the civilian work-force."