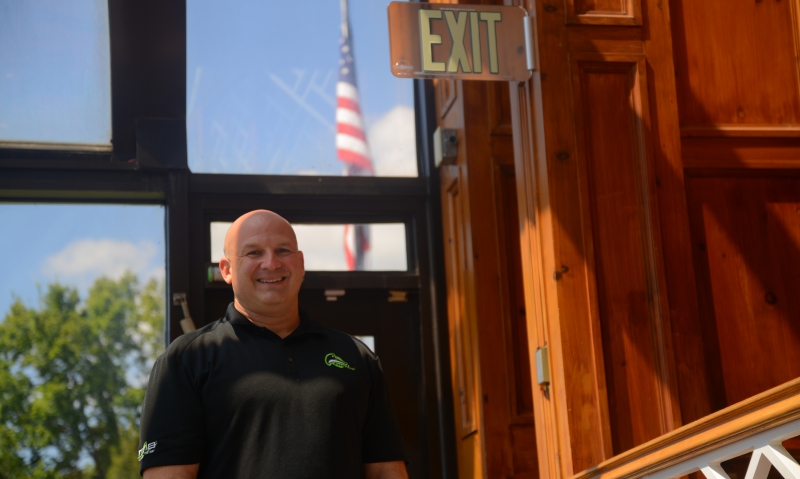 Zachary Green, a Marine Corps veteran, created a line of products designed to keep firefighters and civilians safe through use of photoluminescent technology.

Legionnaire Zachary L. Green knew at a very early age that he wanted to become a Marine. The valuable skills he learned in the Corps played an integral part in shaping his success as an entrepreneur.

Green left the military and became a firefighter with the Wyoming Fire Department in Ohio. It was there, while sitting on the back of a fire truck, that he found the inspiration to create products designed to keep firefighters and civilians safe. Green was determined to find a way for firefighters to see while navigating dark stairwells and rooms through use of photoluminescent technology.

The Marine took what he learned about the technology behind military Kevlar helmet bands with "cat eyes" and applied the same concept to similar gear worn by firefighters. His self-illuminating products create a light source sufficient enough to rely on during treacherous, low-visibility scenarios. The innovative technology is essential to accomplishing the mission of many occupations due to the products’ self-sustaining capabilities.

“As a firefighter, this is something that I am very passionate about,” Green said. “Anything that relies on batteries or electricity is going to fail when you need it the most.”

The Cincinnati native’s company, MN8-Foxfire, showcased the first set of products – an illuminating helmet band and a do-it-yourself illuminating adhesive strip kit for stairwells and other indoor areas – in 2010. Since then, the product line has grown to include self-illuminating neon exit signs and reflective visual coatings for fire hydrants, ladders and other tools.

The highlight of Green’s journey as an entrepreneur occurred recently when he witnessed members of the New York City Fire Department on television wearing his technology while performing a rescue at one of the new World Trade Center Towers. It touched the Legionnaire to see the nation’s heroes outfitted with his company’s products. Today, more than 60,000 firefighters in over 25 countries use Foxfire products on the job.

Green attributes much of his company’s success to the capabilities of his products paired with the fact that the technology is also environmentally friendly, cost-saving and safer than current battery-operated equipment.

The Legionnaire never imagined his business would grow as rapidly as is has. Like many other business owners, Green faced hurdles and was even told he would fail by people close to him. “The key is to adapt and overcome obstacles that may arise," he said. "It is similar to military leadership and confidence courses. It doesn’t matter how you move your ammo can over the wall with your web belt. What matters is that you applied creativity and worked together. “