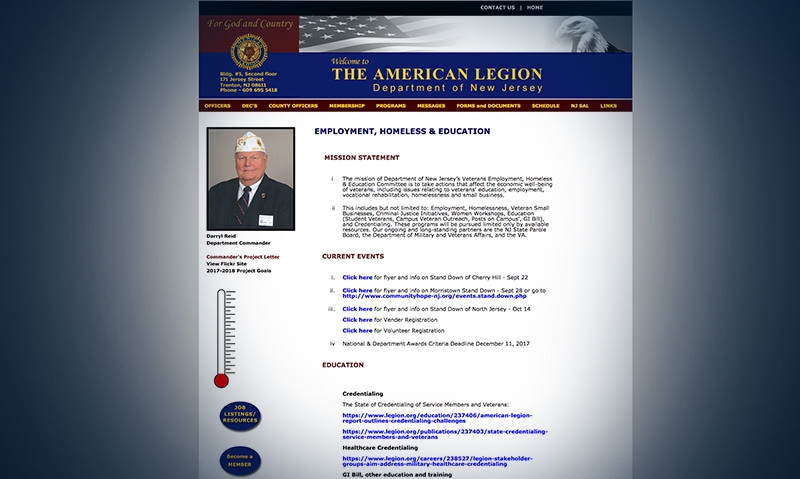 Whether teaming up with the U.S. Chamber of Commerce and other agencies to conduct veteran and military hiring fairs, working with state businesses to place veterans in training programs or joining with the State Parole Board to help rehabilitate veterans who’ve run into legal problems, The American Legion Department of New Jersey has been at the forefront of assisting in the military-to-civilian transition process.

The department has now taken those efforts a step further, revamping its website to provide even more resources for veterans seeking employment or housing assistance. The department’s website features sections on current employment and veterans assistance events, a listing of veteran-owned businesses, links to veterans resources and job-training sites, job listings, and education and credentialing information.

“It’s a one-stop shop,” said Bob Looby, the department's Veterans Education and Employment chairman. “There are a lot of veteran organizations out there, but I think we have the best product. We’ve had other organizations and businesses wanting to come partner with us. That says a lot.”

The Department of New Jersey became heavily involved in Hiring Our Heroes career fairs in 2012, but when the annual number of job fairs was reduced by the U.S. Chamber of Commerce, the department began looking at other ways to assist with the transition process. Since then, they’ve partnered with other state organizations and agencies to conduct their own hiring fairs, teamed up with the Small Business Administration on entrepreneurship workshops, and recently joined with the Sansone Auto Group to create a program that offers training and then employment in multiple automotive jobs.

“In 2012, I wouldn’t have thought we’d be where we are now,” Looby said. “But here’s my project manager (background) coming out. You take a project phase by phase, and if a new opportunity arises or the client wants (more), then that’s the next phase.

“When job fairs started slow, it was a natural to expand the (transition assistance) to business workshops. It’s almost like it’s been a natural evolution.”

Looby said his and the department’s passion for assisting in the transition process comes from one simple reason. “It’s why we put on the Legion cap,” he said. “It’s what I personally signed up for when I accepted the chairmanship in 2012. If you’re not going to do your job, don’t take the chairmanship.”