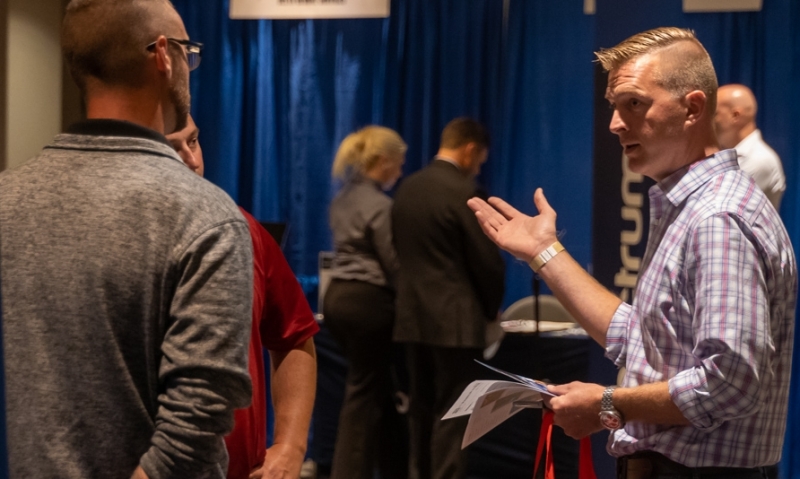 Jon Beach attends job fairs to receive contact information from hiring employers. As an American Legion service officer, he takes their information and shares it with the 50 or 60 veterans he sees a day who are looking for jobs and need a connection within the civilian workforce.

Beach, a member of Post 12 in Richmond, Ky., visited the Hiring Our Heroes event held in conjunction with the 100th National Convention of The American Legion in Minneapolis on Aug. 28.

“I can take these things from these vendors and apply them to what I do (as a volunteer in The American Legion) and the veterans I come across in the (Berea) VA medical center,” Beach said. “It’s been a great opportunity because I’m meeting a lot of people who are going to be able to help veterans that I come in contact with down the road. It’s been a good experience.”

Chris Kondo said that while people know 3M for its Post-It notes, the company also creates body armor and helmets for the military. “Being here (at the hiring fair) is important because many who served, it’s purpose-driven. So this career path is very appealing to them because they can continue to help save somebody’s life,” said Kondo, veteran/military and people with disabilities recruitment and global programs lead with 3M in St. Paul, Minn.

3M staff at the booth had small tablets with the app Yellow downloaded to scan résumés and have interested applicants type in their contact information and field of interest. This allows 3M staff to push those veterans and servicemembers’ résumés through to a hiring manager in their select field or send them an email with a job opening.

Sheri Perkins, human resource (HR) business partner for Canadian Pacific (CP) Railway in Minneapolis, said the veterans and servicemembers she has come in contact with connected with positions that CP has open. Interested applicants, like Gary Kraft, wrote down their contact information which Perkins will give to CP’s military recruiter to reach back out on specific career path and jobs that they have to offer.

Kraft, who is still in the National Guard, is looking for a new job as the result of some life changes and thought CP was interesting because he enjoys being outdoors. This is his third hiring fair to attend, and while he initially gets nervous walking through the doors to one, he said “they are very beneficial.”

Meanwhile, Jeff Hyde, who is in the Army reserve and looking to change jobs, filled out an application to attend Airstreams Renewables technician program in California that teaches veterans how to climb, maintain and repair cellphone towers and turbines. Retired Staff Sgt. Carl Box, a member of Legion Post 257 in Clarksville, Tenn., and a regional admissions representative for Airstreams, said the program partners with 780 companies nationwide that hire from them. And that students average three to four job offers before even graduating from the technician program.

Prior to the start of the hiring fair, a civilian résumé workshop was held. American Legion HR Director Rodney Rolland spoke about common errors veterans make on their résumés. A few things Rolland advised on was to keep the résumé to no more than two pages; identify yourself as a veteran in the objective statement; extract all military speak out of the résumé; use past tense for past jobs and present tense for current position; list only military training that supports your job goal in the education section; and tailor your résumé to the job you are applying for if able to.

“The résumé is your face before you show up yourself. Second it summarizes how your skills and ability can contribute to the company,” Rolland said. He shared that HR receives every résumé before it goes to the hiring manager. “When you apply for the job you have about seven to 10 seconds to sell the hiring person looking at your résumé whether they think you’re a good fit for the position.”

Rolland and Isaac Fones, program manager-facility consulting for McKinstry, were on hand during the hiring fair to review résumés.

Fones said oftentimes when a veteran or servicemember attends a hiring fair they are bringing along what he calls a generic résumé. “Which is fine and no one advises against it, but you almost can’t provide feedback on that because I don’t know what your résumé would look like if I’m an employer and you’re applying for a job post,” Fones said. “In an ideal situation, do your research on who’s going to be there that has positions open and tailor your résumé to two or three employers at the job fair. Then you’re not saying, ‘Here’s my generic resume please call me.’”

Fones helped Elizabeth Nicchetta, a military spouse, with her résumé as she is looking for a full-time job.

“I really appreciated what he had to say. In terms of the specific feedback he had to say about my résumé with using the STAR acronym was helpful,” Nicchetta said.

The STAR (situation, task, activity, result) method is when one uses each word in a sentence with work experience.

The American Legion, from post to national level, has helped host Hiring Our Heroes events since its launch in 2011 “to help veterans, transitioning servicemembers, and military spouses find meaningful employment opportunities.” To date, more than 31,000 veterans and military spouses have obtained employment opportunities through Hiring Our Heroes events.

“We both believe in the same thing. We both believe in helping our fellow veterans, giving back to those who served our country,” said retired Lt. Col. Kathryn Poynton, director of events for Hiring Our Heroes. “It is important to us that those that are looking for employment are successful. You wake up and you go to work every day and kind of feel like you’re contributing to something, you’re making a difference. And I think the Legion stands for that, and we stand for that. Just to give somebody back that little bit of self-esteem, respect and self-purpose is what’s it all about.”