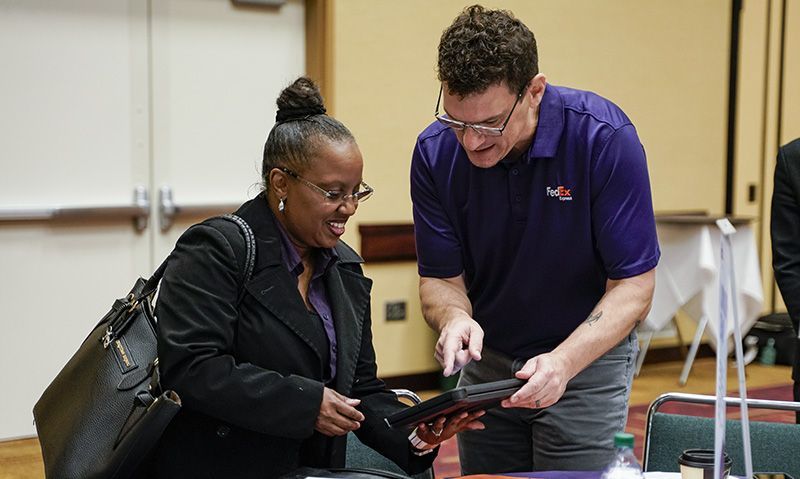 Some 80 veterans, active military and military spouses came to the Indiana Convention Center on Aug. 22, seeking new careers from a variety of employers at The American Legion/Hiring Our Heroes Indianapolis Military Hiring Fair.

The career fair, held in conjunction with the Legion’s 101st National Convention, included 20 employers as well as service providers including the Legion, DOL-VETS, Operation: Job Ready Veterans, and Indiana Outreach and Employment.

Berry Jacobs, a sergeant first class on active duty with the Army, came to the event to explore job opportunities in advance of his planned departure from the service next spring.

“No real expectations, just trying to get an idea of what’s out there,” Jacobs said. “Some companies I didn’t think I’d have any interest in at all are sounding much more interesting than I thought.”

For Jacobs, the value of meeting face-to-face with prospective employers was much more substantial than pursuing information online.

“Definitely face-to-face interaction with someone is way better than just filling out an online application,” he said. “After 20 years in the Army, things have changed. There were no online job portals when I joined the Army. So going back old school almost, actually talking to a real person, it’s nice.”

“I was in the same shoes at one point, where I was looking for jobs and it can be really hard. So to have local events that are here takes a lot of stress off,” said Sean Buchan, a wealth management banking specialist for Merrill Lynch/Bank of America.

A Marine veteran, Buchan said the work ethic and leadership ability veterans bring with them is something his company looks for.

“Bank of America is a believer in hiring veterans. You look at our CEO (Brian Moynihan) on down, our CEO sits on the board of the Medal of Honor organization, so this is a huge initiative that he’s been pushing is hiring more veterans. We hit our initial goal and we’re continuing on,” Buchan said.

Troy Barenie, an engineering recruiter for Raytheon, said the experience veterans have with using his company’s equipment in the field is a plus.

“Also they bring that discipline and structure that we would also look for in our employees, and a culture of teamwork and partnership that is very key for us to be successful in the programs that we support,” Barenie said.

Willie Comer, a veteran of the Marines and the National Guard, came to the career fair looking for a warehouse or distribution job. He’s grateful to see the support companies are giving veterans at events like this.

“Just to see that they are willing, they’re actually looking for a veteran, they’re giving a veteran a chance. … I’m thankful for them doing this,” Comer said.

Along with the career fair, members of the Legion’s human resources staff conducted an in-depth resume writing workshop for those seeking help with their resumes.