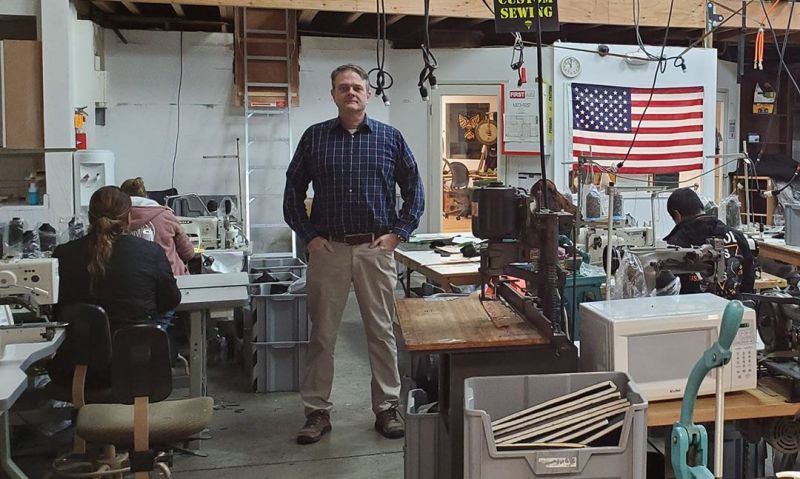 Across the nation, America Legion Family members have come together to provide various forms of support for others as they deal with the effects of the coronavirus pandemic, stay-at-home orders and social distancing.

Included in those efforts have been providing much-needed personal protective equipment (PPE) to health-care workers, first responders, older veterans and anyone else who may need it. American Legion posts have collected PPE and distributed, and in many cases have taken on the tasks of assembling masks.

Some members of The American Legion Small Business Task Force also have been working around the clock to ensure much-needed items continue to be available to health-care workers during the COVID-19 pandemic.

And in Ohio and California, two American Legion members have transformed their small businesses – one a part-time business, the other a full-time enterprise – into mask manufacturers in order to assist health-care professionals, first responders, military personnel and anyone else in need.

Drawn “To Answer The Call.” After serving for three years on active duty in the U.S. Army – including a Special Ops unit deployment in Afghanistan – Jim Cragg came back home to Los Angeles in 1997 and started a sewing company that made protective military gear. But after a rather frank discussion with a frontline nurse and fellow Legionnaire, the first vice commander of Ronald Reagan-Palisades Post 283 has transitioned his S.O. Tech Tactical into a PPE manufacturer.

S.O. Tech Tactical has developed gear for the military and first responders, and has 11 patents on primarily military medical equipment. But Cragg, who has remained in the Army Reserve and currently is a lieutenant colonel, made a decision to switch over to PPE manufacturing after discussions he’d had with fellow Post 283 Legionnaire Peng Vang, an Operation Iraqi Freedom Army veteran, about the potential of running out of PPE. Vang is a nurse at Cedars-Sinai Medical Center and volunteered to work in the COVID-19 unit – a move that didn’t surprise any of Vang’s friends.

Vang came to Cragg’s factory to help design the mask, which is made from military ribstock uniform material that is both durable and dries quickly. “We were looking to change the paradigm of mask production, which is lightweight throwaway masks to something that would be durable, long-lasting and reusable,” Cragg said. “We also devised a way to drop in reusable filters. The filters can be washed. The mask can be washed. These are designed to last for months.”

S.O. Tech Tactical had a batch of masks to Vang within two days. Since then, Cragg has teamed up with other sewing manufactures to produce 3,000-5,000 masks a day. Around 30,000 have been delivered to both military personnel and first responders.

Another 1,200 or so have been distributed through a donor program that allows someone to cover the costs of the masks and then have them donated to area hospitals and first responders.

And then there’s Kurt Hiete, another Post 283 member and Vietnam War Navy swift boat captain. Hiete, distributes some of the masks around the Los Angeles area at no charge to the recipients. “He started out passing out masks to elderly post members and to widows, and he’s branched out from there into the community,” Cragg said. “Kurt is the guy who calls me up every night saying, ‘Jim, I passed them out. I need a reload.’ He’s clicking right back … to his days in Vietnam. He needs more ammo.”

For Cragg, who is 100-percent service-connected disabled and has several veterans among his 20 employees, manufacturing the masks was another opportunity to serve.

“What draws us all to The American Legion is that sense of veteran community, and I felt drawn into that brotherhood,” he said. “It’s a brotherhood of service. We all served in uniform for our country and our community. When our community is in need, we’re all drawn to answer the call.”

“Your Oath Never Dies.” What started as sewing for friends, and then sewing on rank changes, insignias and patches on members of her husband Shane’s U.S. Army unit became a part-time business 16 years ago for Conn Weissenberger Post 587 Adjutant and Past Post Commander Lianne Gring-Whitaker. But now Sideline Embroidery & Sewing has shifted to making protective masks for those in the Toledo, Ohio, area who need them.

Prior to the coronavirus, Lianne’s business consisted of creating custom embroidery pieces, hemming items and other sewing. But when a friend who works for a nursing home company that manages three different residences reached out, Lianne had a new mission.

“She said, ‘I know you made some masks for your (family). Could you help me by making some for the nursing home I work for?’” Lianne said who agreed and then found out the request was for 200 masks “'whenever you can get them done.’”

Shane wasn’t scheduled to be at work at the time and was able to “sit there and pin things together. That was his whole job,” Lianne said. “I cut everything. I prewashed everything. I spent the next couple of hours ironing (the fabric), cutting it and setting it up.”

Lianne said she ended up spending 18 hours a day sewing the masks. Within three days the 200 masks were completed. “But they hadn’t even gone out the door yet to her and other people had already said, ‘Hey, we heard you’re doing masks. Can we get on this revolving list?’” Lianne said. “This list is now seven pages long of individual people (and) businesses that have been asking for masks.”

Lianne served in the U.S. Army in the 1990s and co-owns the business with her husband, who retired from the Army in 2014 and currently is ALR Chapter 587’s director. To date, their effort has produced around 1,300 masks through well over 600 hours of work.

Lianne doesn’t charge for the masks. “Some (recipients) have brought us gift cards to buy more material, cash to buy more material and donations just so we could keep it going,” she said. “A friend, she works for a different nursing home, and she needed so many of the ones she was asking for to be a specific color. She saw the lights on in the garage when we were working late, and she sent dinner. And then she sent Frostys. And I was like, ‘You know, this is better than any paycheck right now.’”

The masks have been given out to health-care workers, individuals and anyone who needs them. “It just kept evolving,” Lianne said. “I just dropped 52 off at a chiropractor’s office so he can start allowing more patients in. His office is not corporate-owned. It’s not hospital-owned. It’s another mom-and-pop business.”

Lianne and Shane celebrated their 20th wedding anniversary on April 8. The couple spent the special occasion making masks, something Lianne said she’s committed to doing for as long as she can.

“I raised my hand. I took an oath to do everything I can to defend,” she said. “Just because I can’t see this (enemy) doesn’t mean I’m going to stop. When you serve so many years in the military, that part doesn’t leave you. Your oath never dies. So taking care of your community and all that, that comes first.”