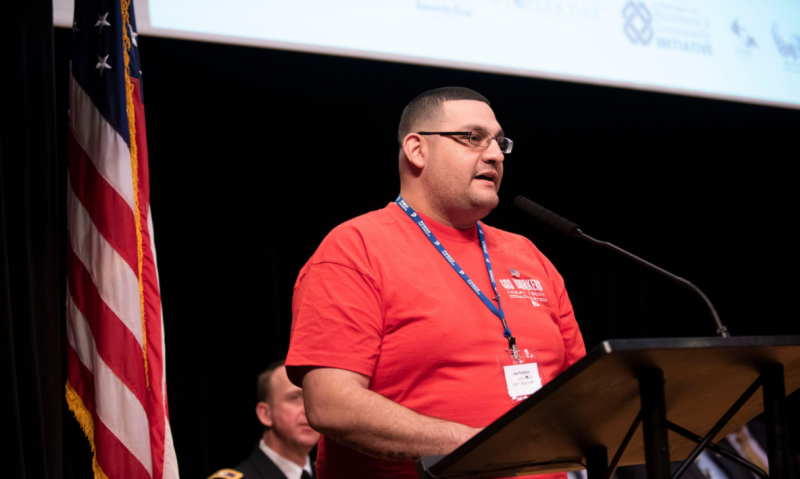 Joe Tischina wanted to enlist in the Marine Corps the day after he watched the events of 9/11 unfold on a television screen in his high school classroom in Chicago. But the Marines require a diploma, and he was only a sophomore, so he put off enlisting. Tischina ended up enrolling in culinary school.

But one day Tischina saw a Marine walking on campus, and decided he could put it off no longer. He walked into the recruiter’s office the next day

Although Tischina volunteered for combat duty, he spent three of his four years in the Marines as a cook in Okinawa, where he eventually oversaw dozens of his fellow servicemembers. Soon after he left the Marines, Tischina became a father, which brought new responsibilities and family obligations. He worked two or three part-time jobs at a time, but struggled to find a full-time position anywhere.

“Everything that could go wrong went wrong,” he says. “My family ended up splitting apart because I didn't have any money and I felt like a failure. How could I be in charge of 25 Marines and 65 Japanese nationals, and two months later, no one will give me a job?”

But Tischina soon learned about an innovative program in Chicago called The Utility Workers Military Assistance Program (UMAP). The program prepares veterans for employment in the natural-gas industry and awards 52 college credits for an associate’s degree; a one-month, hands-on, paid internship at Peoples Gas; and a real shot at a job. Since its inception in 2012, more than 600 graduates have joined the ranks of the Utility Workers of America.

“I was never a great student, but having those veterans in my classes, knowing that they were going through the same things that I was — it motivated me to work hard every day,” says Tischina. “And afterward, going through the internship and showing up to work with so many veterans, it feels like I never left the military.”

The American Legion has been a strong advocate in the push for credentialing for servicemembers, advocating in the halls of Congress and statehouses throughout the U.S. The American Legion has also worked with allies to develop programs that support these initiatives. Recently, the Legion worked with the Lumina Foundation and others on a new report related to credentialing successes.

To learn more about what employers, government agencies, and policymakers can do to help former servicemembers get credit for the skills and experience they accumulated in the military, read the report The Future of Credentialing of Servicemembers and Veterans: Leveraging Partners, Policies and Resources.

Rick Passarelli, a veteran, launched UMAP as part of his role with Union Local 18007.

“Joe’s story is repeated tens of thousands of times, with so many men and women who separate from the service each and every year,” Passarelli said. “So many veterans don’t get credit for the classes that they’ve taken throughout their military career. But that’s starting to change: Boot camp itself is good for 12 to 14 college credit hours because of the leadership courses, equal-opportunity courses, and conflict-resolution courses. And that training continues for active-duty members throughout their entire careers. So we’re trying to get our partners at DoD to do a better job of tracking those courses and mapping those skills sets so our colleges and employers can give people credit for everything they’ve learned.”

Passarelli has connected a lot of those dots, working with the mayor’s office and the City College of Chicago to create Dawson Technical Institute, a school within a school at Kennedy-King College.

“My father was a Korean War veteran who, when he came home after the Korean War, found a job as a United Steelworker, so Joe's pathway was my father's pathway,” says Juan Salgado, chancellor of City Colleges of Chicago. “Now we have 600-plus stories like Joe's, as a result of this program — human beings with families that have made a sacrifice, and now they’re part of a real community with academic rigor and, in the case of Kennedy-King, a veterans centers so their transition into college is smooth and seamless as possible.”

Suleima Hamad is another veteran with a similar success story. Hamad dropped out of high school when she was pregnant with her first son, and she struggled to get on track after he was born. She finally made the difficult decision to enlist in the Navy and leave her young children with family members, believing that it would make her a better provider in the end.

But when she got back from years as a Navy engineman, the transition was anything but smooth: “When I left active duty and joined the reserves, I thought that putting my military service on my resume would bring me some better opportunities, but it didn't matter what I learned because I didn't have a college degree or the civilian experience that companies expected to see.”

Hamad was eventually homeless, working 70- to-90-hour weeks at a gas station to take care of her parents and her children, when her brother told her about UMAP. Workers at the school connected her to Terrell Odom, CEO of Veterans Serving Our Communities, who hired her as part of a veterans work-study program and helped her find housing with help from Volunteers of America. Hamad graduated from UMAP in March 2018, and has been working for Peoples Gas for three years.

“I'm so glad I can be with my kids on the weekends and actually be a mom, because they're only young for a certain amount of time,” she says. “And I’m so grateful I don’t need to stress out over bills anymore, trying to make ends meet.”

“Every day I go to work knowing that I’m making a difference — keeping women and children warm because I provide a service,” he says. “I served with 25 Marines, and five of them are no longer with us; I lost three to suicide, one to drunken driving, and another one to ALS. So I can literally say this program has saved my life.”