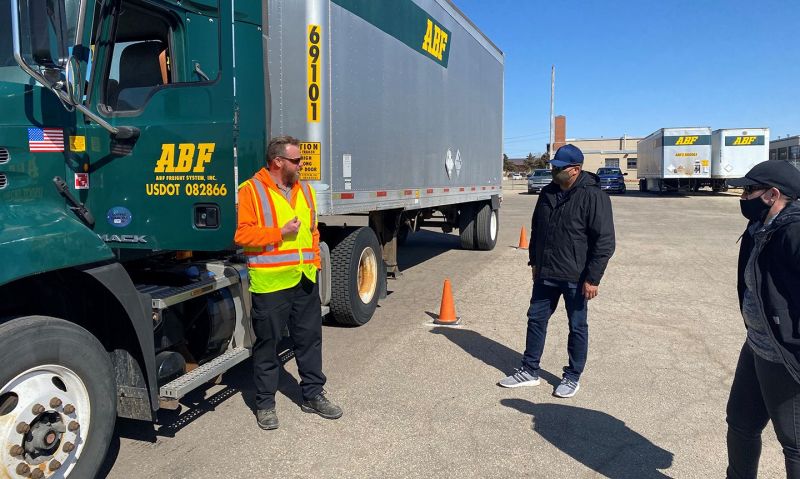 Mario Pucci joined the Marines in 2009, after seeing how several years in the Corps had turned his brother into “a completely different person — one who was focused and mentally chiseled.” The younger Pucci spent nine years as a diesel technician working on tactical vehicles and then transitioned into a supervisory role, where he managed direct reports and oversaw operations, from ensuring critical parts were on hand to guaranteeing the work was done on time.

At one point Pucci had considered a career in law enforcement, but as he approached his final days in the Marines, he was drawn to the freedom and independence of a truck driver. In November 2020 he heard about a unique program offered by ABF Freight Systems, which was hiring former servicemembers to drive the kind of vehicles he’d been servicing for years. Pucci knew all about the inner workings of big rigs, including maintenance, safety and the operation of airbrakes. He had driven a few tactical vehicles over the years but would need help learning how to operate a manual transmission and maneuver a full-size tractor-trailer.

That’s where ABF came in, offering Pucci the training he needed as part of the Teamsters Military Assistance Program (TMAP).

“The most challenging part of the program was just overcoming the fear of doing something wrong behind the wheel,” he says. “Obviously, I didn't want to crash into another vehicle because my foot slipped off the clutch or came off the brake. But I was amazed to see the progress I made only three weeks into my training.”

Pucci admits he had to ice his knee for a few evenings because he was riding the clutch so hard, but the whole process gave him newfound respect for the truckers who trained him at every step: “A lot of these guys have 10, 20, 30 years driving experience, and they've been willing to take time off the road and share that knowledge with all of us,” he says. “You just can’t get this kind of training anywhere else.”

The American Legion has been a strong advocate in the push for credentialing for servicemembers, advocating in the halls of Congress and statehouses throughout the U.S. The American Legion has also worked with allies to develop programs that support these initiatives. Recently, the Legion worked with the Lumina Foundation and others on a new report related to credentialing successes.

To learn more about what employers, government agencies, and policymakers can do to help former servicemembers get credit for the skills and experience they accumulated in the military, read the report The Future of Credentialing of Servicemembers and Veterans: Leveraging Partners, Policies and Resources.

As a captain in the Army, ABF’s president, Tim Thorne, had seen the transition issues facing soldiers, sailors, Marines, airmen and Coastguardsmen, which is why he launched the recruitment program with the Teamsters in 2015.

“ABF used to focus its recruiting efforts on college graduates, but because the military offers structure and leadership opportunities, and produces people with real-world experience, it’s been a great place to recruit new drivers,” says Jerry Elam, program manager with ABF. “Every year, hundreds of thousands of people come out of the military, so we’re out there talking to veterans and former servicemembers to see what jobs we can offer them.”

ABF started recruiting servicemembers in Fort Sill, Okla., before moving on to Fort Carson, Colo., and Fort Riley, Kan., and then TMAP became an official partner of the Department of Defense’s SkillBridge program.

These efforts are part of a broader movement to put more ex-military behind the wheel, thanks to agreements between the Department of Defense (DoD) and state motor-vehicle departments. Back in 2012, in the wake of the Great Recession, DoD was paying out nearly $1 billion in unemployment benefits to former servicemembers. At the same time, the trucking industry was anticipating a wave of retirements that would leave a gap of 500,000 to 1 million drivers. Although former servicemembers with experience in IT, medicine, and law enforcement typically need credentials from various bodies, the most powerful credential in the trucking industry is established by the Department of Transportation and administered by state DMVs. And if thousands of military members are driving buses, trucks, and military vehicles, why not let them skip the training and the tests and move into vacant roles even faster?

Selden Fritschner, a Navy veteran who served in Vietnam, was told to make it happen in his role at the Federal Motor Carrier Safety Administration, with the full backing of Congress: “I started the process off by comparing the states’ driving-license testing process with the training and regulations in place with the Army, Navy, Marine Corps, and Air Force, so that experienced military drivers could bypass the driver’s test,” he says. “After that we created the even-exchange program which allows full-time drivers to skip the written test, too.”

Today 13 states let drivers bypass the driving test, and all 50 states are utilizing the Military CDL Skilltest Waiver. Since February 2020, Fritschner estimates more than 50,000 former and active servicemembers have taken advantage of one or both offerings, speeding the way to a high-paying job with good benefits.

Nearly 900 of those drivers got their commercial licenses in Virginia where Camdon Gutshall is deputy director for the Driver Services Administration.

“With any big program like this, there are always challenges and some initial confusion,” says Gutshall. “But I would tell all the government agencies that are trying to streamline processes like this one to look at it in a positive light. Yes, there are a lot of bureaucratic hoops to jump through, and it can seem like a daunting task, but it feels great to help people who have come back from serving our country — and in the end, that’s what really matters.”