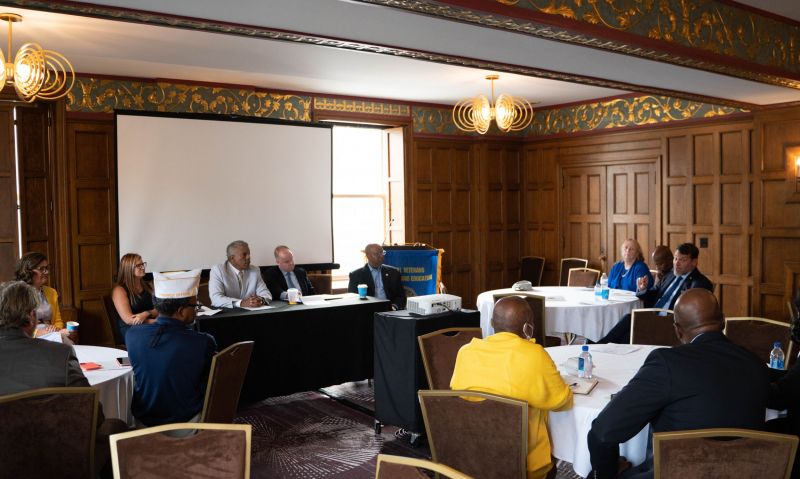 The many challenges the veteran small business community has faced over the last decade has caused dramatic drops in the number of veteran-owned small businesses overall, as well as those seeking government contracts.

Members of The American Legion Small Business Task Force want to take action to reverse those decreases. They discussed the challenges during a panel session at the Veteran Small Business Roundtable held in conjunction with the Legion’s National Convention on Aug. 29 in Milwaukee.

“We, as a government, have not invested enough in (the small business community),” said panelist Billy Jenkins, CEO of Veterans Professional Services Group. “We’ve built up the big banks, we’ve built up the big corporations over and over again, now it’s time to start looking at the mom-and-pop organizations across our country.

“… Small business is the engine of this economy.”

Maggie Bullard Marshall, vice president and government liaison with Aldevra, noted that between 2011 and 2020, there had been a 43 percent decrease in the number of small businesses doing work with the Department of Defense.

“Part of the reason why it’s so complicated (to get into the community) is because these opportunities are being bundled,” she said, citing VA projects that could call for 35 times as much manpower as a particular small business would be able to provide.

Finding a way to “unbundle” such projects could lead to more small businesses bidding for government contracts.

“Why is that?” he asked. “What is the root cause of all these companies not even coming to the door, let alone stepping through that door. And it comes down to, in large part, a lack of understanding and no one’s on the other side of that door to help them. … They don’t have a battle buddy to help mentor them through all these challenges, whether it’s those monster contracts or whether it’s just the personalities with working with the federal government.”

Establishing and/or increasing mentor programs for newer small businesses could help address some of those issues.

Access to capital continues to be a major issue for small businesses as well. But panel moderator Charles Baker, president and CEO of MCB Lighting & Electrical, pointed out a government rule — created by the task force — called “Fast Pay” which requires contracted small business owners to be paid within 15 days — as long as the small business owner points that out to the contracting officer, otherwise it’s no more than 30 days.

“If you get paid in a timely manner, it reduces the need for access to capital,” Baker said.

Baker said he wanted the discussion to lead to action in the form of resolutions to be considered by The American Legion.

“We’re going to present resolutions to The American Legion, because without the resolution, then this is a futile discussion. So what we have to do is figure out, how do we address the issues that are important to the community to make sure it gets addressed?” Baker asked.

Other panels during the daylong roundtable focused on federal contracting and access to capital for veteran-owned small businesses.