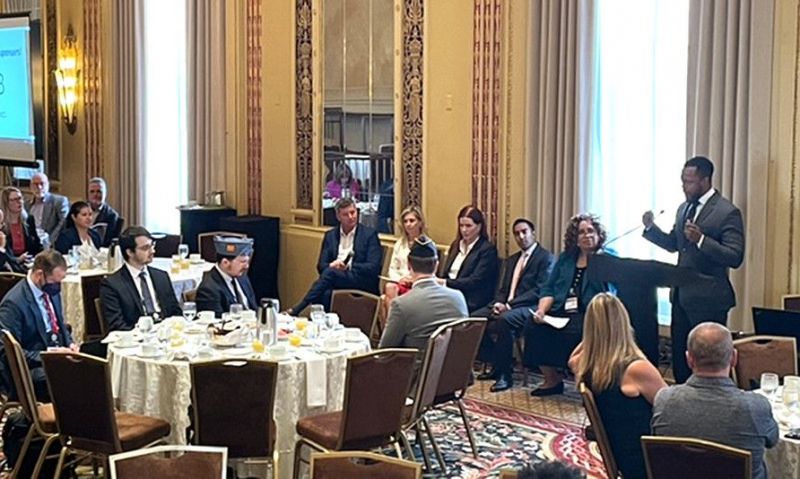 The American Legion Veterans Employment and Education Commission convened a National Education and Credentialing Summit in Milwaukee in conjunction with the Legion’s 103rd National Convention.

Trained, skilled and experienced military veterans, as well as those soon to separate from the Armed Forces, are looking for careers in specialized civilian fields, from commercial truck driving to cybertechnology.

Meanwhile, the U.S. economy desperately needs credentialed professionals in just those fields – and many more – to close a widening skilled-labor gap and get the nation moving again after the COVID-19 pandemic and a historic supply-chain meltdown.

That was the point of a two-day American Legion National Education and Credentialing Summit Aug. 31-Sept. 1 in Milwaukee. Task Force Movement, which was created by the White House last April, used the summit during the Legion’s 103rd National Convention as a platform to accelerate programs to put veterans into commercial driving careers and to announce yet another hiring portal in need of former military personnel: cybersecurity.

At the time of the summit, the shortage of truck drivers in the United States was reportedly 80,000, and the number of cybersecurity positions open stood at 40,000.

“Our people in uniform receive outstanding technical training and work experience in their military occupations but often have difficulty translating those skills as they transition to the civilian workforce,” a new American Legion report states. “Holding a civilian credential that attests to an individual veteran’s level of skill and competence helps civilian employers understand how military training and experience apply to the position for which they are hiring.”

The American Legion recently completed a full report of the summit, which brought together leaders in industry, labor, higher education, military, government and the veterans service organization community.

"From the time I was appointed to serve as chairman of Task Force Movement, I knew we had our work cut out for us,” said Patrick Murphy, an Army veteran and first who served in Iraq to have been elected to Congress. “The American Legion has been an incredible partner and stepped up immediately to provide a platform to convene the Higher Education and Credentialing Summit. The attendees for the meetings included high level appointees from the DoD, DoL, DoT, NEC, higher education and VA, along with TFM partners inclusive to employers, VSOs and academic institutions.”

A prominent aspect of the credentialing push is the military recruitment value of post-discharge career opportunities, GI Bill-related or otherwise. U.S. Assistant Secretary of Defense for Readiness Shawn Skelly made the point at the summit, as the report recounts, that “the stories that veterans and their family members tell about their experience in uniform serving their country and their success post-transition have a tremendous impact on recruiting an all-volunteer force and on the success of the Department of Defense and its mission on behalf of the United States.”

Skelly was one of the many panelists and speakers who participated in the summit, including student veterans from the University of Chicago Loyola, officials from the Departments of Labor, Transportation and Defense, State Approving Agencies, the Teamsters and companies that have used national tools to fast-track veterans into their workforces, such as Werner Enterprises, which has been deploying the DoD SkillBridge program to prepare credentialed veteran employees for the trucking industry since 2017 and now operates on five bases.

-        Raise awareness among veterans and military personnel of military and federal programs like the Military Skills Test Waiver, which can expedite the process between military driving and commercial driving licensure.

-        Establish apprenticeship programs for veterans and take advantage of Department of Labor opportunities to learn while working, as well as the DoD SkillBridge program for active-duty personnel about to discharge.

-        Educate human resources professionals about Learning and Employment Records which emphasizes what individuals know and can do rather than degrees earned.

-        Enact policies that protect student veterans from losing earned credits and GI Bill benefits in the event their institutions of learning are shut down by transferring them to another school. The summit gave the Legion a stage to promote its model to assess risky institutions that may use deceptive marketing practices to attract veterans and their GI Bill benefits.

“On this Veterans Day and as chairman of TFM, and on behalf of the TFM partners, we applaud The American Legion for their continued dedication and commitment to these critical issues,” Murphy said. “TFM was honored to participate in these forums that have addressed the issues of economic impact and national security for our transitioning service members, veterans and industry partners from trucking and cybersecurity.  We look forward to reviewing and sharing the American Legion’s National Higher Education report with partners and affiliates across the country.”

Click here to view the entire report, produced by The American Legion with assistance from SOLID, LLC.