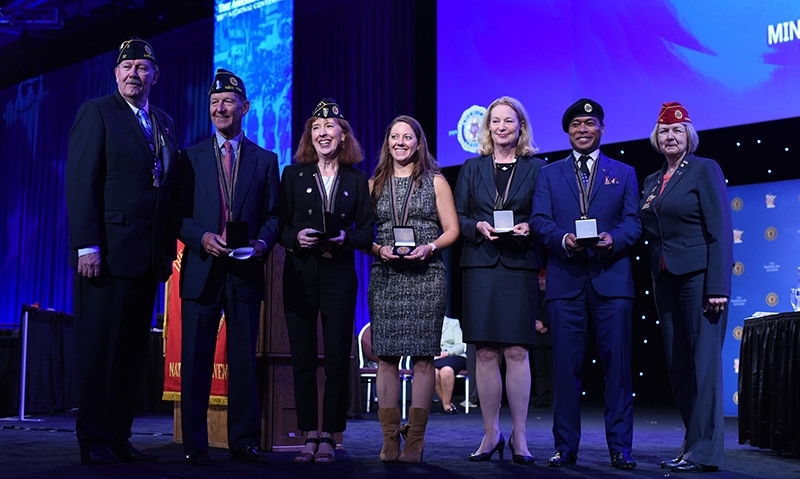 A musical, theatrical journey through time, back to the origins of The American Legion – including a personal exchange across generations, from one Roosevelt to another, and multiple observations about the organization’s impact – opened the 100th American Legion National Convention general session Tuesday in Minneapolis.

Thousands of veterans and their families were escorted back to the World War I era by music, dance and a dramatic monolog by Troupe America, which featured a re-enactor who portrayed Theodore Roosevelt, Jr., a pivotal founder of the organization. Roosevelt Jr., retraced his own wartime experience and his passion to start a veterans organization while still stationed in Europe after the armistice of 1918. He reminded the crowd of the Legion founders’ belief in a well-prepared, educated and proud America propelled by the Preparedness Movement that rose up in defiance to U.S. policy of isolationism prior to the nation’s entry into World War I. Much of that movement was influenced by former U.S. President Theodore Roosevelt, who encouraged his sons to serve their nation as citizens and as soldiers alike. “I did what he taught us to do – to carve out a place in history, put performance above prestige, be responsible and always do what’s best for the good of the whole country, not just yourself,” the re-enactor shared with the crowd.

Such was one founding value of the organization that turns 100 next March. Tuesday’s program also illustrated how the World War I generation was “inspired by a desire to make America strong – during times of war and of peace, for the good of all. That vision built The American Legion’s legacy … Today, a new vision is coming into focus, led by new generations of veterans, including – I am delighted to say – my own grandson.”

Theodore Roosevelt IV, chairman of The American Legion’s 100th Anniversary Honorary Committee, then took the stage and saluted the man portraying his grandfather, the president’s son who went on after helping form The American Legion to earn the Medal of Honor in Normandy, France, during World War II. “(My grandfather) could not place a period on his service – a period that might leave the men who returned home without comfort and aid. He knew their service demanded more of all of us; it demanded that we remember our veterans and their families – with concrete action, concrete action that does not falter, that does not waiver, that is not subject to the whims of politics – that belongs to neither party and to no ambition other than memory and duty. And that, I am very proud to say, is the heart and soul of The American Legion, now entering its second tour of duty, its second hundred years.”

“Our legacy was formed from a vision,” Rehbein said. “Now it is time for us to form a new vision and a new legacy.”

Roosevelt IV then invited to the podium members of the honorary committee.

“I appreciate the opportunity to play some small role in the great story of The American Legion,” Roosevelt IV said in conclusion. “It is a story that belongs to all of you because it is the fruit of so many labors, so much good will and tenacity… I am confident that grandfather and his fellow veterans of the Great War would be pleased today.”