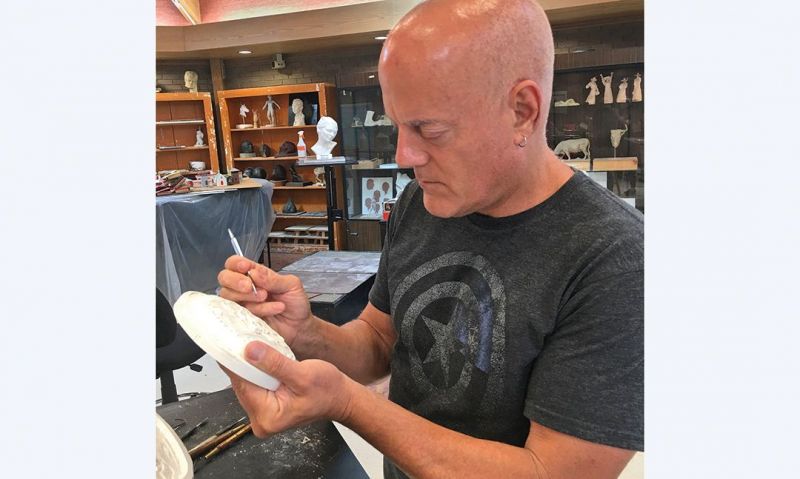 For the past decade, he’s contributed to coin and medal designs through the U.S. Mint’s Artistic Infusion program. Among them are the Doolittle Tokyo Raiders Congressional Gold Medal and the Mark Twain and Boys Town commemorative coins. He’s also the designer of the obverse side of The American Legion’s commemorative gold piece, which goes on sale at noon Eastern on March 14.

“I thought it would be interesting to see what I could do with a geometric and symmetrical layout,” Costello says. “The design commemorates the beginnings of The American Legion in Paris right after World War I, with a head-on view of the Eiffel Tower and a V, which evokes victory. I rounded out the geometry with the outside of the American Legion emblem. I wanted to play with it and see if it would work, and I was pretty happy with the results.”

Costello is the son of a Korean War veteran who was a tail gunner on a B-29.

“I’m always inspired by my dad, so I think about what he would like to see on some of these coins,” he says. “He’s kind of a collector, and he’s very proud of the work I’ve been doing. I think of his service when I’m doing these designs. I’ve always had an appreciation for veterans’ sacrifice and what they put on the line to serve and protect this country. Any military-themed medal or coin I’m able to work on is just an incredible honor – especially one for The American Legion, which is the nation’s largest veterans organization. I feel privileged to be able to contribute a design that will last and help tell its history.”